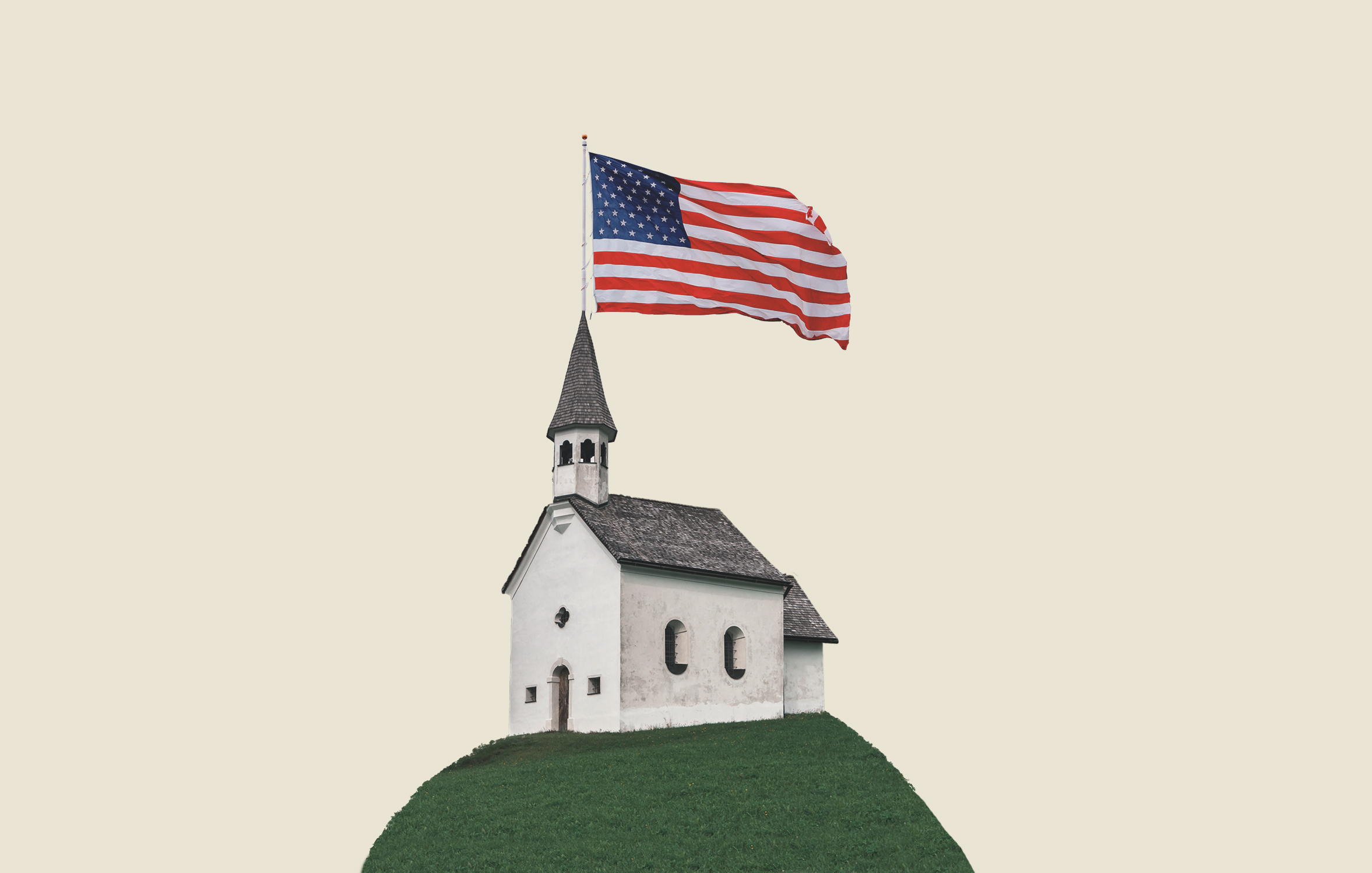 In July of 2019, lawmakers in South Dakota passed a new law requiring all public schools to display the national motto, “In God We Trust”, in a “prominent location,” with a font no smaller than twelve by twelve inches.

Some students expressed discomfort with their new decoration. “We are a cultural melting pot, and it is really important that we make all people who come to America to feel welcome,” a student named Abigail Ryan told local news. But in general, the mood around the bill was a celebratory one.

“Let’s keep hope alive,” said Republican state Senator Phil Jensen, who sponsored the bill. “This is our legislature, our history, a nation that trusts God.”

Such talking points have become so standard among certain political groups that they fail to shock or prompt outraged cries about the Separation of Church and State, but this bill is not an outlier. In fact, it’s part of a large coordinated effort. Six “In God We Trust Bills” (sometimes called the National Motto Display Act) have been passed in the last year, and ten more have been introduced. They are, in most cases, the spear tip of a broader effort from a coalition of Religious Right groups known as “Project Blitz.”

Project Blitz is an initiative that utilizes a mill of model bills promoting legislation favorable to the Christian Right. Organized by groups like the Congressional Prayer Caucus Foundation in partnership with an organization called Wallbuilders and the National Legal Foundation, these model bills are grouped in three different categories, ranked by the amount of expected opposition. The general plan, according to a 148-page playbook published by Religion Dispatches, is to start with category one legislation like the “In God We Trust Bills” that will meet with minimal pushback and slowly advance towards more controversial laws such as a “Resolution Establishing Public Policy Favoring Intimate Sexual Relations Only Between Married, Heterosexual Couples.”

Project Blitz was launched in 2015 as part of what’s known as the First Freedom Coalition, and has since amassed 29 state legislative “Prayer Caucuses” to further its goals, but it’s part of a much older and larger movement in the United States that seeks to reframe the country as an inherently Christian nation.

This movement, known as Christian nationalism, is in the business of merging Christian and American identities, liberally mixing biblical teaching with the principles of constitutional democracy until the line between them is blurred or even erased altogether.

Some of this seems benign on the surface. An American flag in the church pulpit. “In God We Trust” on the dollar. Christian politicians referring to the Second Amendment as a “God-given right.” Christians, after all, have a right to advocate for favorable laws just like anyone else. But real Christian nationalists aren’t out for anything so salubrious as equal treatment under the law, and their methods involve the marginalization of citizens who don’t see things according to a bracingly narrow definition of what it means to be both an American and a Christian — sometimes with deadly repercussions. And Christian Nationalists are facing a growing and vocal number of critics from the same demographic they claim to represent: American Christians.

“There is a need and opportunity for Christians who are concerned about the merging of American and Christian identities to have a place to take a public stand and to express their concerns about rising Christian nationalism,” says Amanda Tyler.

Tyler is the executive director of the Baptist Joint Committee. She says that Christian Nationalism’s most potent foes will be Christians themselves who stand up for religious liberty for everyone — not just their fellow Christians.

In 1979, the Southern Baptist Convention underwent a historic struggle in which its most conservative members rallied against its moderates, expunging them from positions of leadership and setting the course for a new, far more conservative agenda, reinstituting older ideas such as, for example, the “doctrine of wifely submission.” It was, according to then-Southwestern Theological Seminary President Russell H. Dilday “a self-destructive, contentious, one-sided feud that at times took on combative characteristics.” Advocates of this seismic shift called it “the Conservative Resurgence.” Critics have another name: the Fundamentalist Takeover.

Baptists are far from the only advocates for Christian nationalism, but many experts point to the Conservative Resurgence as the moment the movement began its creep towards the mainstream. For example, when the Baptist Joint Committee on Public Affairs refused to broaden its focus from individual religious liberty to include the new leadership’s more aggressive policy goals, it was defunded.

Nearly a third of Americans say that being a Christian is a key part of being an American, according to a 2017 Pew Research survey. And it’s with that third in mind that Christian Nationalists are pushing their way into the public sphere. At their most extreme, Christian Nationalists may describe themselves as “dominionists,” who believe Christians ought to have dominion over what they consider to be the seven forces — or, in their parlance, “mountains”— that shape culture: business, government, media, arts and entertainment, education, family and religion. As David Barton, a Christian Nationalist and one of the leaders of Project Blitz put it in a radio broadcast, “If you can have those seven areas, you can shape and control whatever takes place in nations, continents and even the world.”

This shaping and controlling has frequently led Christian Nationalists to push their own agenda with little regard for people of other faiths. It has even veered into violence. In April of 2019, a nineteen-year-old California man named John Earnest wrote a seven-page letter detailing his beliefs that Jews controlled the media for their own ends. He said he believed killing Jews would glorify God, so that’s what he did. He walked into the Chabad of Poway synagogue and opened fire, killing a 60-year-old woman and injuring three others.

A few months later, in August, a self-described “proud, God-loving Christian” named Patrick Crusius killed 22 people in a shopping center in El Paso, Texas — fighting back against what he called an immigrant “invasion.” Baptist News Global wrote that the attack “put Christian nationalism on trial.”

And while Christian nationalism often overlaps with white supremacy and anti-immigrant sentiment, providing cover for violent extremists, its outward manifestations don’t always grab headlines in such obviously abhorrent manner. In fact, many Christian nationalists are regular and welcome figures in Washington D.C.

Take the Family Research Council. In 2000, a Hindu priest was allowed to say a prayer in U.S. Congress for the first time. In response, the FRC released a now-deleted statement, saying “Our founders expected that Christianity – and no other religion – would receive support from the government as long as that support did not violate people’s consciences and their right to worship. They would have found utterly incredible the idea that all religions, including paganism, be treated with equal deference.”

The FRC is a hub for dozens of state-level Family Policy Councils, many of which are affiliated with the First Freedom Foundation, the group behind Project Blitz. The FRC is led by Tony Perkins, who was appointed to the United States Commission on International Religious Freedom by President Donald Trump. The FRC’s annual “Value Voters Summit” attracts big names in the political sphere, which in 2019 included former White House Press Secretary Sarah Huckabee Sanders (no relation to this author), one-time White House strategist Sebastian Gorka and Trump himself.

Trump has been a major boon to Christian nationalists, who have been willing to ignore his unsavory scandals in exchange for the unprecedented access he’s granted them in the Oval Office. As Perkins told the New York Times in 2017, “I’ve been to the White House I don’t know how many more times in the first six months this year than I was during the entire Bush administration.”

In 2016, then presidential-candidate Trump unveiled what he called his Evangelical Executive Advisory Board, made up of 25 evangelical leaders who represented his “endorsement of those diverse issues important to Evangelicals and other Christians,” according to a campaign statement. Among its members are Faith and Freedom Coalition head Ralph Reed, which is also affiliated with Project Blitz.

After the election, some members of the board have disputed that it actually exists (Johnnie Moore, who is listed as one of its members, told the Washington Post that “there is no formal faith advisory board of any sort at the White House.”) The Post reports that the board has met several times since the election, and was honored at a White House dinner in 2018. It may go without saying that no other religious group has been granted such unfettered access to the White House.

But as the aims of Christian nationalism have become more apparent, some Christians are starting to reckon with it. Reverend Mika Edmundson is a pastor in the Orthodox Presbyterian Church attended by John Earnest, who shot up the California synagogue. In the days after the shooting, Edmondson expressed somber acknowledgement that, on some level, his church bore part of the blame for Earnest’s beliefs. “It certainly calls for a good amount of soul-searching,” he told the Post. “We can’t pretend as though we didn’t have some responsibility for him.”

And now some Christians are moving beyond soul-searching to start fighting against Christian nationalism — and a truer, purer expression of how their faith should look in the public sphere.

In July of 2019, Amanda Tyler and the rest of the Baptist Joint Committee for Religious Liberty launched a group called the Christians Against Christian Nationalism, which condemned Christian nationalism as “a persistent threat to both our religious communities and our democracy.” In a statement, the group wrote that “as Christians, we are bound to Christ, not by citizenship, but by faith.”

The statement was crafted under Tyler’ leadership and was signed by Christian leaders like Red Letter Christians co-founder Tony Campolo, Sojourners president Jim Wallis and Reverend Elizabeth Eaton, the presiding bishop of the Evangelical Lutheran Church in America.

“Christian nationalism is not the same thing as patriotism or being patriotic,” she explains. “I am a Patriot. We can be patriotic and still understand that we don’t need to minimize our religious convictions or somehow make those fit into a particular political affiliation or nationalistic affiliation.”

Tyler hopes that this statement will provoke her fellow Christians to think about the victims of Christian nationalism — one major one being Christianity itself. Jesus, after all, adamantly refused political power whenever it was offered to him, insisting throughout the Gospels that his Kingdom was “not of this world.”

“Whenever the state gets too cozy with Christianity, Christianity is the one that gets compromised,” Tyler says. “Our radical Christian values are not in line with the powers and principalities of this state. Jesus taught us that we are citizens of two kingdoms, an earthly kingdom ruled by our governments and God’s kingdom. We have to work out what we render to which kingdom.”