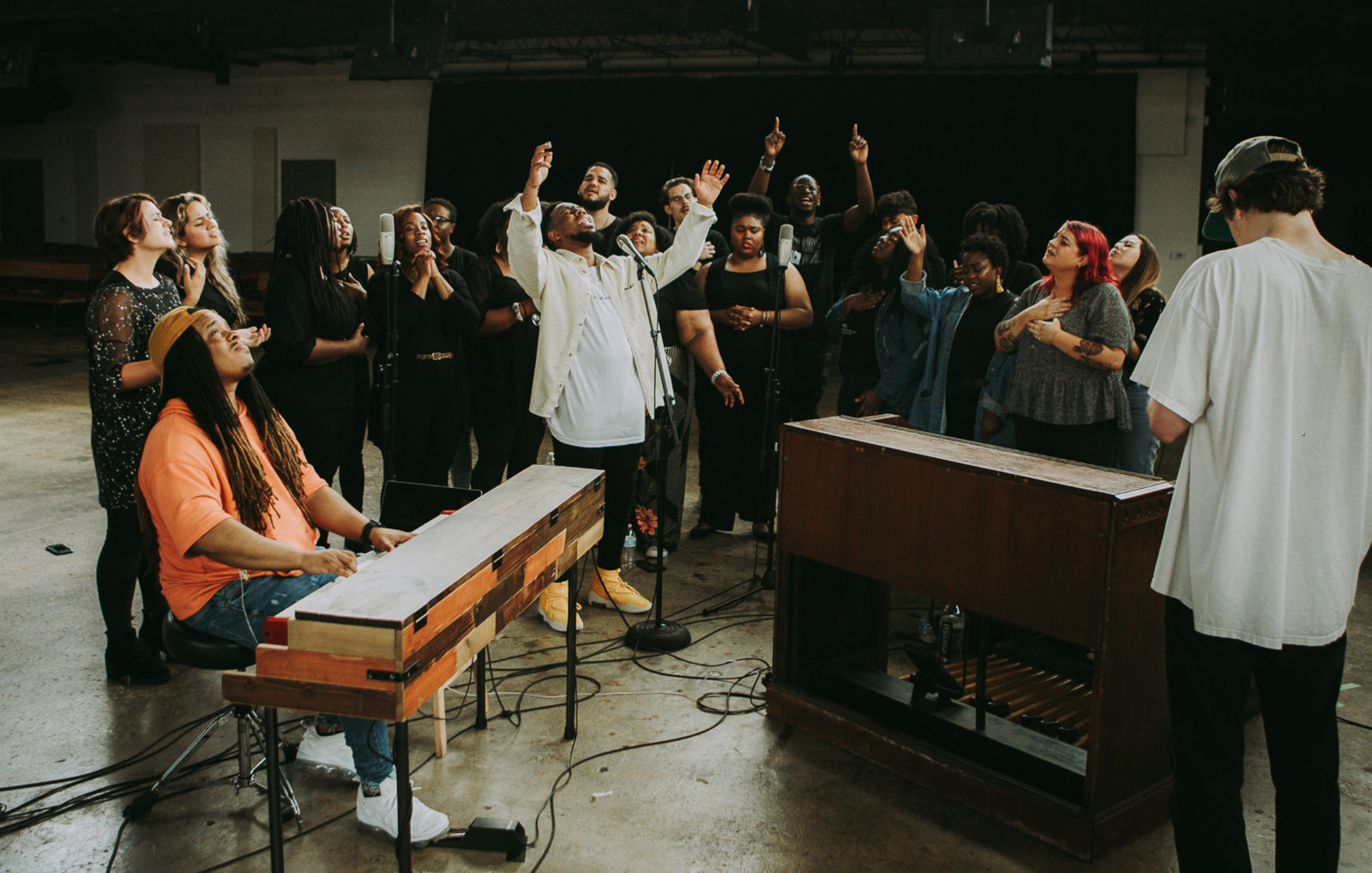 One of the country’s most dynamic worship music groups revels in breaking the mold.

“One of the first records we did, they tried to put it out as a gospel record because I was Black,” says Chandler Moore.

“And we were like, ‘Why is this gospel? Why do you categorize this as gospel?’ It’s not even anywhere along gospel lines.”

Moore is right. As one of the worship leaders and songwriters for Maverick City Music, what he’s doing can’t be easily categorized as gospel. It can’t be easily categorized at all, which might explain why Billboard threw their hands up and checked the first box they could think of. Maverick City Music makes vertical music, no doubt about it — their songs are made with the Church in mind. In that sense, it’s certainly another chapter in the grand tradition of American Gospel music. But Maverick City Music’s songs are also wilder and woolier creatures than most of what pops up on a Billboard Gospel chart.

His bandmate Namoi Raine agrees. “What we do is so different. It seems like it can’t go together but we say: yes, it can.” 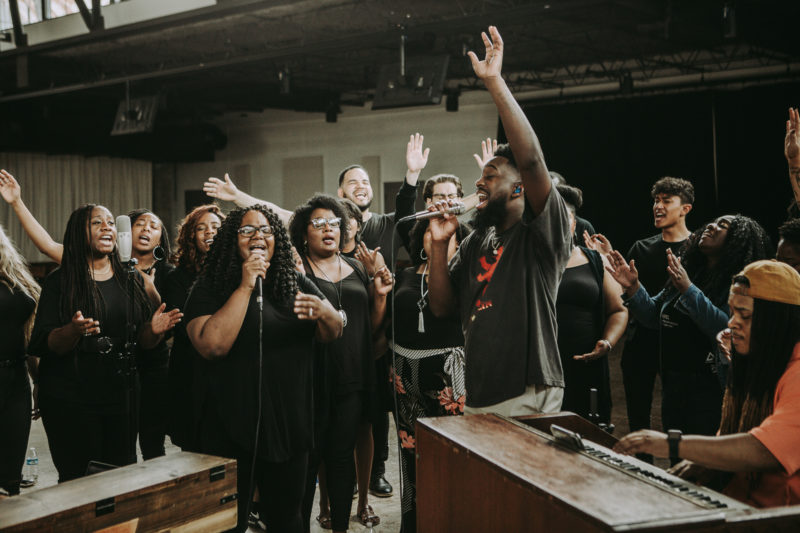 If you’ve heard what they’re doing, this makes sense. If you press play on any of the songs embedded in this article you’re reading, you’ll see what Raine means. Maverick City Music represents a leap forward for Church Music — an evolutionary step forward that the whole genre has been waiting for without realizing it. No matter how many years you’ve spent singing worship music on Sunday mornings, when you listen to Maverick City Music, you realize this is a creative exercise that still has room to grow. It can still get you to sit up and take notice.

“We’re not trying to make a statement or anything,” Raine says. “We’re just actually doing it. We’re bringing people together. And what we’re realizing is that we’re less divided than we think.”

Maverick City Music is the brainchild of Tony Brown and Jonathan Jay, two men who had, according to Raine, a “desire to look at the marginalized people in the CCM and the gospel world, and bring those voices to the center.”

“I think where Tony and JJ saw the necessity for different voices that are marginalized, on the outskirts, not as prevalent and for giving those people a voice,” Raine says. “Because church looks like more than one thing.”

That started out as writing workshops, where Brown and Jay would bring their friends together to write new worship songs as a group — a group that was deliberate about giving the marginalized a voice.

“Tony always says that he had been in a bunch of different writes, but there were never really many Black people, never really many women,” Raine says. “And then even in the writes that he was in, it was almost like people were struggling to feel like they could be real in those writes and write from a place of passion. That was like his motivating factor in bringing us together.”

Like Moore, Raine felt shoved into categories she didn’t want or need before she found a place in Maverick City Music. “There is a distinction made between the way you sing and if you sing gospel enough,” she says.

“I have more of a pure, straight tone kind of voice,” she says. “So then it’s like, OK, well, you sound like you belong like in the CCM world. But am I welcomed in the CCM world? There’s a lot of that.”

“But when we came on with Maverick, it was just us worshiping. We could be ourselves.”

Maverick City Music remains a group of songwriters, at its core, even as their albums rake in millions of listens on Spotify and their YouTube performances wrack up hundreds of thousands views, turning curious onlookers into lifelong fans. The growing collective known as Maverick City Music is committed to a core vision: writing honest songs, centering historically marginalized voices and crossing divides.

“It’s still lowkey,” Raine says. “I feel like there’s no set expectations. And I feel like that’s what helps it feel authentic.”

“It’s not as easy as you would think it would be. You know what I’m saying?” says Moore. “You’re writing language basically that the Church is going to sing to God. That responsibility can be so heavy. Trying to be creative enough, but not so creative that you’re going against who God is and His character.”

Moore is talking about the difficulties that come with writing a new song for the Church. It takes more than just a sonic pivot. It takes finding a new way to say something important, true and beautiful to God. That’s no mean feat, and it’s one the songwriters of Maverick City Music take very seriously.

“The temptation can be: ‘Hey, we heard this so many times let’s try to be a little racy,’” Moore says. “But then you lose the authentic purpose of what we’re writing. It can be very gritty sometimes, just trying to get to the meat of what you want to say.” 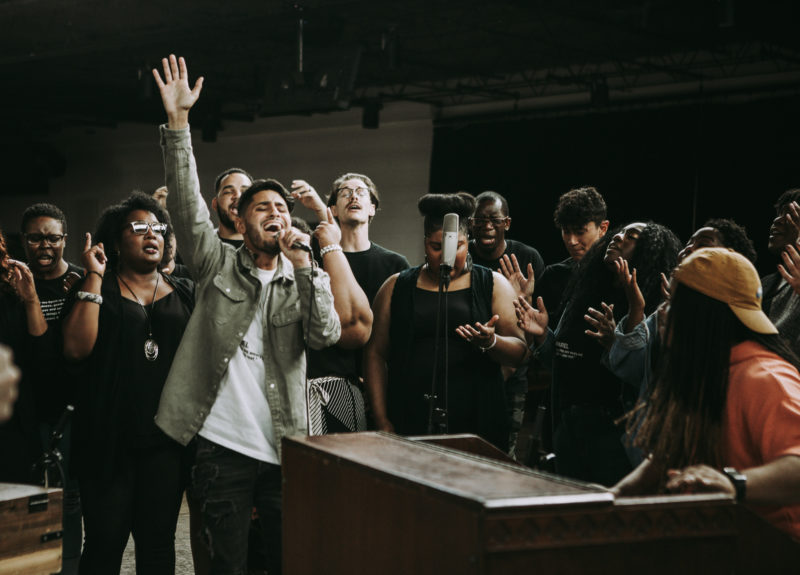 According to Moore, that’s when the Bible comes into play. The songwriters of Maverick City want to be revolutionary (“rebels with a cause,” as Raine has it), but they want everything they write to have a biblical foundation.

“We try to be as theologically correct,” Moore says. “But also, there are scriptures and Psalms where David is like, ‘Hey God, why do you hate me?’ That’s in the Word of God!” (Note: Moore isn’t exaggerating here. For example, in Psalm 22, David asked ‘My God, my God, why have you forsaken me? Why are you so far from saving me, so far from the words of my groaning?’ This was, of course, famously quoted by Jesus as he bled out on the cross.)

“God gives you the freedom to express a very real emotion,” Moore says. “Jesus was human. We have not a heartbreak he doesn’t understand.”

The people of Maverick City Music have found themselves thrust into the spotlight at an interesting time, when issues of racial representation are under enormous scrutiny — particularly in the Church, where such conversations have often been ignored or badly botched. Maverick Cty Music is diverse, intentionally so. But unlike a lot of recent initiatives, that diversity is a natural part of the group’s foundation. It’s not an added perk or an extra feature. It’s core to who they are.

“What people have found in Maverick is: before you found an artist, you found a family,” he continues. “And now the Lord is using it to present a unified front in which unity looks like diversity. Unity looks like every type, every color, every genre. That’s what it looks like.”

Raine agrees and says that the group just reflects the diversity of the country we’re in.

“One of the reasons why Maverick City looks the way it looks is because it’s a sample of what exists in our nation,” she says. “So our nation doesn’t just look like one thing, our churches don’t just look like the one thing and really most of the people that you’re dealing with that are involved come from cities, come from spaces that are diverse and multicultural.”

Both Raine and Moore are against what they call the “implant system,” in which one or two token people of color are “implanted” onto a predominantly white team as a way of showcasing diversity.

“Now you have a lot of pressure on that one person to be the spokesman representative of their whole community,” Raine says. “That can get dangerous.”

“It’s corny,” Moore agrees. “I know a lot of churches who have diverse congregations but not diverse leadership. It has to start with something more than just bringing somebody on for church vision or whatever. Like, no! Honestly sit down and try to have a conversation with them.”

“All the songs on Volume Three, they all have their own moment,” Moore says. “You feel the response of the room and Jesus’ presence.”

So far, Maverick City Music has released most of their music in “volumes,” eschewing catchy album titles for a more laid back, almost mixtape vibe. Volumes One and Two released in 2019 and Volume Three dropped just ahead of the pandemic in 2020.

The third volume feels like the work of a group of people who have realized that what they’re doing is working. It’s more expansive, more formally daring and feels even less inhibited than its predecessors. One song, “Closer” featuring Amanda Lindsey Cook, doesn’t even crack three minutes. Most of the songs are closer to ten. “Lean Back,” which Moore sings with Cook, is almost sixteen excellent minutes long. There’s no formula, and Moore and Raine stress that their group works hard to maintain a spontaneous energy to all their recording sessions.

“I wish I could say we have a grueling process, but that’s not how it works,” Raine says.

“We’re all responding to His presence at the same level,” Moore agrees. “And it gets higher and higher.”

The result is a new kind of worship music that feels born of both authenticity and anointing, spontaneity and sophistication. But all of that would be for nothing if the music was going the right direction. For Maverick City, worship music is less about what God can do for them than what they are bringing to Him. And their prayer is that God transforms their efforts into something new.

“This is God’s Church. It’s His Church,” Raine says. “And so we want Him to have His way. That doesn’t mean we’re not responsible or we don’t operate in excellence. We train. We put the work into writing. The musicians are trained musicians. And then we come, we gather, we bring it together and give it to Him. It’s an offering. And hopefully He breathes on it and uses it.” 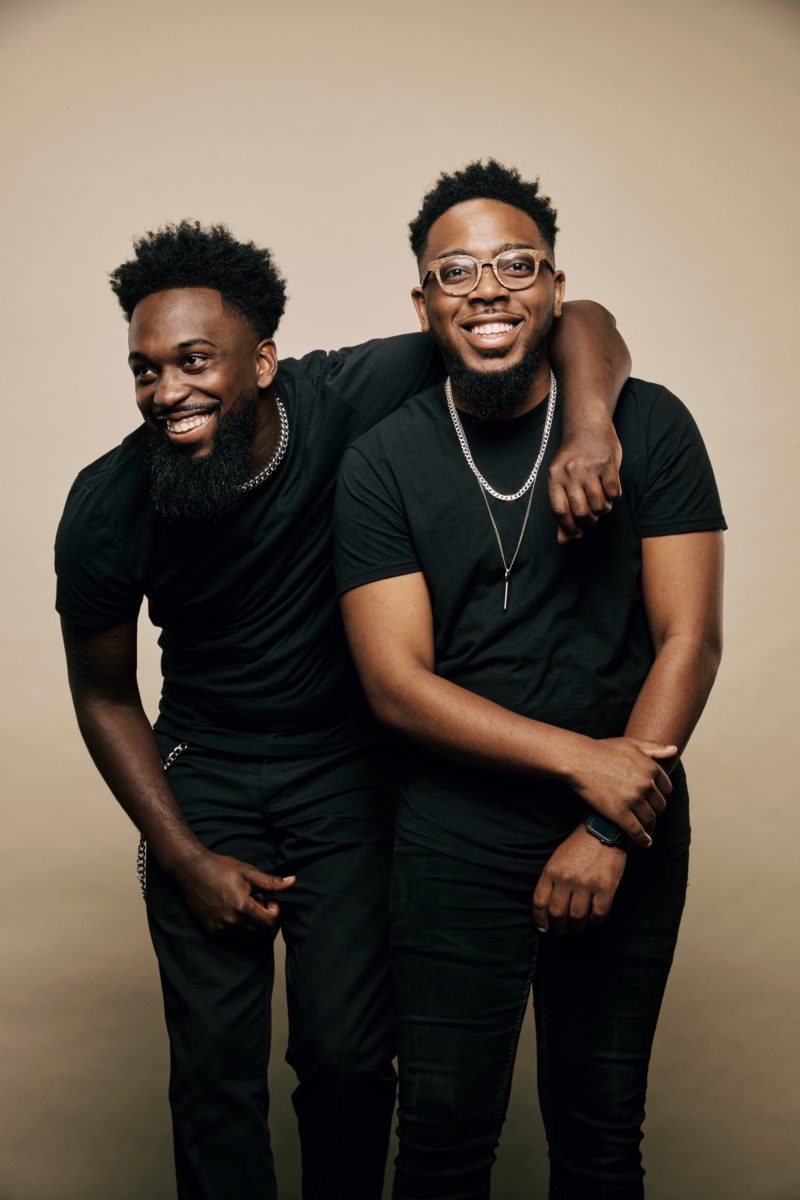