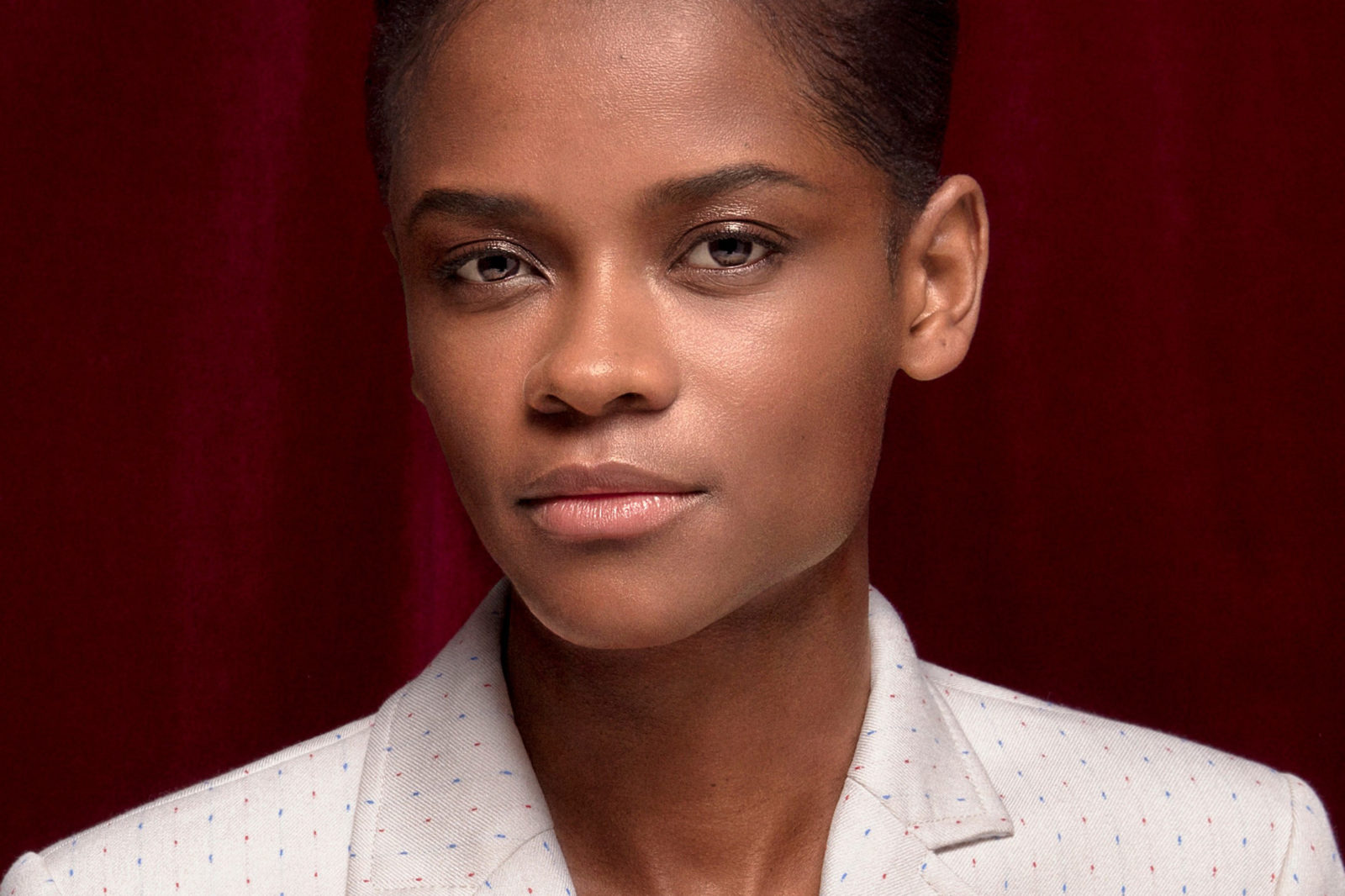 What does it take to be a star? Talent, obviously. Ambition, usually. A little bit of luck doesn’t hurt, as there’s always at least some “right place, right time” energy involved in any “star is born” situation. But what does it take to stay a star? That’s a much trickier question with fewer known rules and more x-factors. And it’s where Letitia Wright finds herself now. She is a star, by any definition of the word, having played a pivotal role as Princess Shuri in a handful of Marvel’s biggest and best movies and now taking on a leading role in Amazon Prime’s Small Axe anthology. But good roles are only part of the job. They don’t quite explain why Wright feels so vital to the present moment, or why you get the sense watching her that not only has a star been born, but a star is here to stay. And if that sounds like a lot of pressure, she seems barely aware of it.

“I don’t see it as pressure,” she says, turning her head thoughtfully in her home in London. “I just see it as an opportunity to tell the truth and put something out there that’s meaningful.”

Wright is poised and alert, and approaches conversations with a gentle focus. She chooses her words deliberately, alternating between moments of guarding her own privacy and flashes of bracing vulnerability. She’s possessed with the sort of self confidence that puts people around her at ease. It’s very easy to believe that pressure doesn’t phase her.

“Whenever I feel pressure or anything like that, I just take a couple of steps back and realize it’s not that big of a deal in the grand scheme of things,” she says. “I try to breathe, I pray, I let it affect me and then keep focused on my health, food and friends.”

“Just a balanced life,” she sums up, looking around her room as if searching for the right term. “It’s not easy to have that. But I’m trying.”

In talking to Wright, you get the sense that this balance really is important to her. She’s driven to professional excellence, and she takes her film career seriously. But her acting — that whole “star” thing — is really just one part of her life; not the whole thing. Her family is important to her too. So are her friends. And most important of all, she’ll eagerly tell you, is her faith.

Wright spent a brief time on the “up and comer” circuit with a role in an episode of Doctor Who, followed by an Emmy-winning performance on Black Mirror. After that, it was off to Wakanda where she stole scenes as the royal family’s tech genius troublemaker in Black Panther, which led to further appearances in Avengers: Infinity War, Ready Player One, The Commuter (movie for movie, no Hollywood actor’s films earned more in 2018 than Wright’s) and then, of course, Avengers: Endgame.

And now, Mangrove. Wright stars as Altheia in the true story of the 1970s trial on the Mangrove Nine, directed by Oscar-winning auteur filmmaker Steve McQueen. The film is part of Small Axe, an anthology of five different films helmed by McQueen, who Wright calls “the crazy genius.”

“His way of thinking is ten steps ahead of everyone,” she says, looking genuinely amazed.

That not only went for McQueen’s filmmaking chops, but his onset behavior as well. “He didn’t wait until the end of the project to say, ‘You did a good job,’” Wright says. “He would tell you right there on the spot, as soon as they yelled ‘cut.’ He would come out and just praise you and elevate you. As a young woman in this industry — especially as a young Black woman — you don’t always get that. But Steve does it all the time.”

Mangrove, like every chapter in the Small Axe anthology, showcases the under-explored stories of Black heroes in recent British history. “I’m hoping and praying that it’s an education,” Wright says. “It’s also a way to show the elders that are passing the baton onto the generation now. Their stories are not at the forefront. Steve decided to do that. I’m so honored and grateful to be a part of that.”

Wright jokes that she’s “a five-year-old in the Lord.”

“I’m coming up to completing five years of being a Christian,” Wright says. “It’s been so many different things. It’s a relationship I’m building with the Lord.”

Wright said that she “knew I wasn’t living a life fulfilled” five years ago, but didn’t know what to do about it. “I didn’t know that missing puzzle was Jesus,” she says. “I didn’t want anything to do with Jesus, actually. Especially as a young Black person, you think, “Oh man, it’s a white guy. I don’t want to worship that.”

But after seeing a few friends turn their lives around after becoming Christians, Wright started giving Jesus a second thought. She said that observing her friends’ faith helped her realize, “That’s what my life was meant to look like. That’s what my spirit is meant to look like.” She says a friend contacted Wright when she was at her “lowest place” and Wright made a deal with herself.

“I said, ‘I’ll try Jesus for a year. See what happens,’” Wright says, and then she smiles and shrugs.

“I’m still here and I’m not going back.”

And she’s not alone. Her father, who moved to London from Guyana with the family when Letitia was seven years old, had long shared his daughter’s distaste for “white Jesus,” but has recently become a Christian himself. Wright says that growing in “maturity and love” has helped her deal with some of her earlier misgivings, including realizing that, far from being white, Jesus would have had “some beautiful melanin in there.”

“Regardless of what his skin color was — not that it doesn’t matter. It does, because it’s part of his identity and it’s a part of who he was when he was here with us — he’s bigger than just what his hair looked like, or his skin looked like,” she says. “It was about his heart. It’s about what he did for us here on earth and how real he is and how real the Spirit of God is. That means more to me than anything.”

When told that she seems like a very joyful person, Wright is gracious but not surprised.

“You know, my name means ‘joy,’” Wright says. “I try to find joy in everything, day by day, moment by moment,” she says.

That habit has helped her maintain a hopeful outlook in the middle of a 2020 that has, for many, been filled with anxiety, depression, loss and heartache. Notable, of course, was the surprising loss of Wright’s friend and co-star Chadwick Boseman in August.

“Not that you don’t have those bad feelings or you don’t feel sad. We’re humans, we feel things,” she says. “But we can’t allow those to overtake us and to steal the little pockets of joy that we can have that will eventually become bigger pockets of joy.”

“Pockets of joy” is a phrase she comes back to a lot, and leads to an emotional story in which she gives few details,

“Joy is not really a destination,” she says. “It just should be a part of who you are. I think it comes with, day by day, just choosing joy.” Here she pauses and takes the time to choose her words carefully.

“I’ve been going through a difficult situation,” she finally says, her eyes closing. “I’m trying to come to terms with something that recently happened. It’s huge and it’s painful.” (Wright did not elaborate other than to say it involved “life-changing things and situations that you didn’t expect to happen.”)

“In the midst of dealing with it, there are little pockets of joy. I try to just take them as they come,” she says, growing more animated. “It could be my little sister laughing or the birds flying across my balcony or just taking a walk, or just eating a piece of food that I like. Just finding the pockets of joy to get you through the hard times. Then, eventually, you see the hard times transform into wisdom that you can take with you so that when you are in a place of peace and the weather is not so crazy — the storm is not out there — you don’t take it for granted.”

A Star Is Made

So what does it take to be a star? Talent? Wright has it in spades. Ambition? She calls herself a “budding producer,” and has been using her time in COVID quarantine to hone her interests on the other side of the camera. Luck? Well, she’d say she’s “grateful.”

And as for staying a star, well, Wright isn’t sweating that pressure. “I go by God’s Word,” she says. “His word says His yoke is easy, His burden is light. You can be anxious. He understands it. But He says, ‘Be anxious for nothing,’ in His Word. So I apply His Word and just pray it through.”

Wright doesn’t deny the hardships that have come with the territory. They clearly have. But she continues to look for pockets of joy, and those are sustaining her. “It’s a peace that you can’t buy,” she says, and then her gaze darts towards her window. “Wow, the birds!” she exclaims.