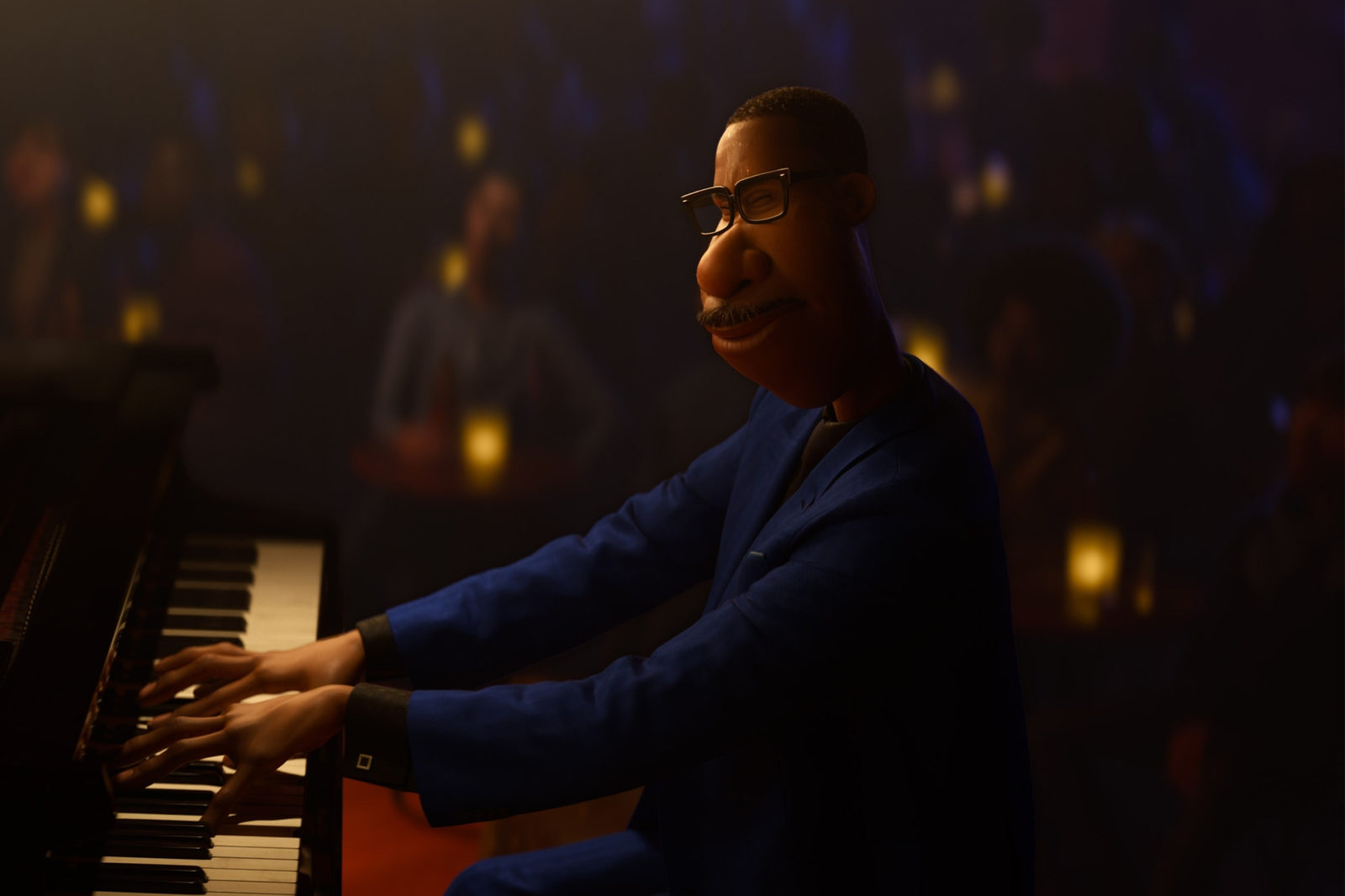 Early on in the writing process for Soul, co-director Pete Docter had an idea: Pixar should put God on screen.

“I was thinking ‘OK, if we’re talking about ‘Why live? Why am I here? Why am I not getting what I want?’ It’s sort of a Job-like story. And I thought, ‘Oh, it’d be fun to have God never referred to Him or Her. I thought it was horribly clever that every line would be spoken by someone else. So it would be a woman. It’d be a kid, it would be all ethnicities and races.”

“Yeah, that was one of the first things to be cut.”

It’s not a totally crazy notion. For one thing, this is Pixar we’re talking about here. If any movie studio in recent memory could be trusted to take a creative swing on the level of getting the voice of God into an animated movie, it’d be this one. Hey, it probably wouldn’t even be the weirdest thing they’ve tried to pull off.

For another thing, this is Soul. It’s Pixar’s 23rd movie and one of its most thematically daring, getting into questions of not just life and death, but purpose, calling and the thin membrane between the physical and spiritual realms. If ever God was going to be included in a Pixar joint, it’d be this one. But ultimately, Docter decided against it. Not necessarily because it was too weird or even too risky. Docter just didn’t want to give viewers too many clues about what lay in store.

“The characters are like us,” he said. “They have to figure things out themselves, as opposed to being taught.”

This type of worldbuilding has been part of Pixar’s brand from the beginning. Even in Toy Story, Pixar’s debut feature, there’s a remarkable trust in the audience to figure out what’s going on without having their hand held. And as Pixar’s scope, daring and reputation have grown over the last quarter century, its commitment to heady storytelling has remained firmly rooted. Children raised on Toy Story have kids of their own now. Lifelong fans of Pixar’s way of doing things are still looking for stories to help them make sense of the world around them.

Soul is a very different movie for Pixar in the same way most of its movies are a little different. But in talking to Docter, you see the blueprint for how to tell a great story — a blueprint that has proven about as reliable as anything out there in contemporary fiction.

Step 1: Connect With Your Audience

Docter started Pixar the day after he graduated from college, the then-fledgling animation studio’s tenth employee. Docter rose through the ranks quickly, helping write the Toy Story movies before making his directorial debut with Monsters, Inc., which he also helped write. Today, he’s the chief creator officer and, by any measure, one of the most beloved filmmakers of the last two decades. Docter helmed Up and Inside Out, in addition to getting involved in virtually every movie Pixar’s made since its beginning.

“The thing I’m more realizing lately is that, when I started in animation, it was all about the joy that I got out of it,” he says. “And now I realize that one of the great joys is the ability to connect with people we will never meet in different parts of the world.”

“We have this amazing ability to connect people; to allow viewers to step into somebody else’s shoes and experience life from a perspective that they have not been in themselves,” he continues. “So those are the most important things for me: representing the world as it seems to me and that I’m struggling with, and hope that you will see yourself in there as well.”

But to hear him tell it, Soul — which he co-directed with Kemp Powers — may have been the riskiest move of his career.

Soul follows Joe Gardner, a jazz-obsessed high school band teacher in New York City voiced by Jamie Foxx. Gardner isn’t particularly happy with his current career trajectory — he has dreams of being a piano sensation in the jazz club circuit. A chance encounter gives him just such a shot and that’s when he meets his untimely end at the bottom of a manhole and Soul’s story truly begins.

“The afterlife was especially like, ‘danger, danger, danger!’ you know?” Docter says, flashing his hands like alarm bells. “There are a lot of pitfalls and things that we could have stuck our foot in by accident.”

To avoid those pitfalls, Docter consulted with leaders and theologians across various religious traditions, trying to not just get a handle on different concepts of what happens when we die but what we look like without our bodies and what belief is even all about.

“I think a major goal of any faith is to try to bring sense for people in their lives,” Docter says. “The idea of: How do I know what I’m supposed to do? Am I making the right decisions? All those things are complicated, and it’s super helpful to have help along the way.”

Soul is less concerned with where we go than who we are; not so much a theoretical peek into the future as one under the hood. But then, that’s what Pixar does: leverage big concepts to get down to deep places of meaning, human relationships and, in this case, even race.

“Our initial concern was about religion,” Docter says. “But the longer term concern became more about race and representing culture. There are a lot of pitfalls and things we didn’t even know we didn’t know.”

Step Three: Talk to the Experts

“For bad or good, we didn’t set out to make this the first African American character,” Docter says. “It was really out of the decision that: This guy, who reflects the artist’s journey, should be a jazz musician. And one of our consultants said, ‘Jazz, you can more accurately call Black improvisational music,’ right? It grew out of the African American culture. And we thought, ‘Well, it’s only right then to have our main character reflect that.’”

Docter says they didn’t take that lightly. Producer Dana Murray confirms the writing team once again sought advice from people who knew what they were talking about.

“We brought on a lot of help,” she says. “We had a ton of consultants and a culture of trust. All these voices were such a huge part in making these characters. It’s very important to us to portray them in a truthful way.”

That extended to the live music sequences, where footage of Jon Batiste, who composed original music for the movie, was used to guide animation of the jazz scenes. Jazz legends as notable as Herbie Hancock and Quincy Jones were also brought in to help shape the story and characters portrayed. Over and over, throughout the making of Soul, Pixar tried to be honest with themselves about when and how they needed help.

“It was a huge responsibility,” Docter says. ”We knew that we wanted to portray the life of this man as accurately as we could — not just because it’s the right thing to do, but because the movie gets better. When you talk about those things in an accurate specific way, strangely, I think it becomes more universal.”

In a way, this is the final takeaway of Pixar’s secret magic — the connective tissue of all their best stories. The reason tales of the friendship between a toy cowboy and a toy astronaut, a geriatric widower piloting a balloon house, the inner emotional workings of a young girl’s mind and a Parisian mouse mastering the culinary arts, isn’t because they’re so general — it’s because they’re so unique.

We might not all know what it’s like to be monsters tasked with scaring children before they go to bed, but we all know what it means to find out our work has a cynical side we weren’t aware of.

We might not all have gotten accidentally trapped in the Land of the Dead, but we all know how music can create new connections between us and the people we love.

And we might not all find souls trapped outside of our bodies, but Docter thinks we all wrestle with the philosophical questions Joe Gardner is asking himself.

“I think where we come to the end is existentialism,” Docter says of Soul’s own journey. “[Purpose] is not just meant to be localized over here and then the rest of my life happens. All of life is spiritual. Everything you do contributes to who you are as a person and to the overall meaning of your life.”

Docter says that telling this story was part of his own process — his attempts to wrap his head around the big existential whys the movie hurls into the universe. He says he’s not there yet, but telling stories with and for Pixar is helping.

“I feel like having the chance to work on this film was a great reminder of how I can be bringing my full self into everything and being more present in moments,” he says. “It has made me more grateful, I think, and more appreciative. It’s not a personality attribute. It’s not something you’re given. It’s a practice. You have to exercise every day.”