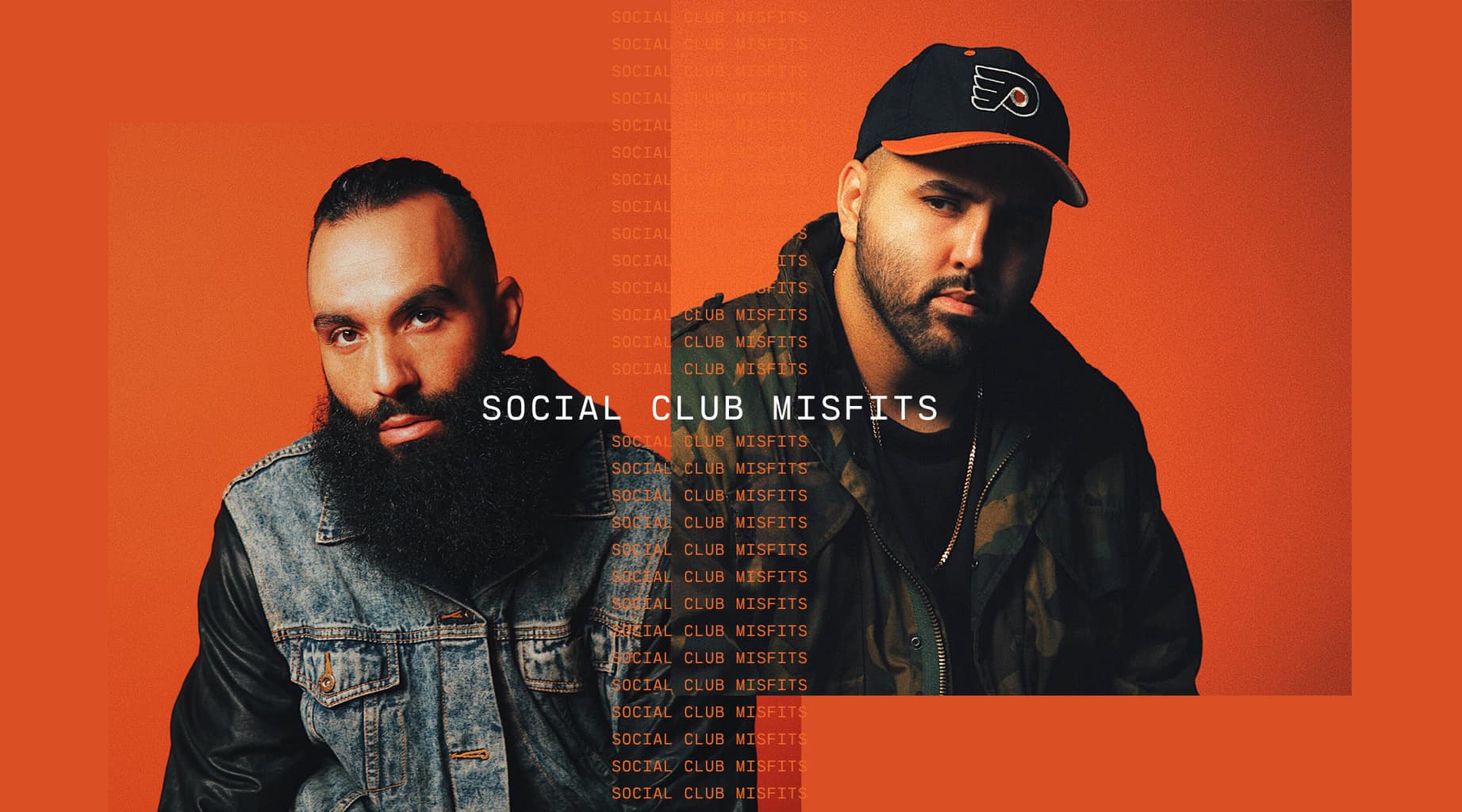 WHEN HIP-HOP DUO Social Club Misfits—made up of rappers Fern (Fernando Miranda) and Marty Mar (Martin Lorenzo Santiago)—got together to start writing the follow-up to their breakout 2017 album, The Misadventures of Fern & Marty (which hit No. 8 on Billboard’s rap charts), they started with an unexpected tool: a whiteboard.

“The whiteboard is our compass,” Marty says, reflecting on creating their brand-new album, Into the Night.

It’s there, before the microphones are on or the recording equipment is running that the pair begins to dump all of their ideas, emotions and experiences to start figuring out how those things will become something that won’t just make for a great album, but will really impact fans’ lives.

And when it comes to what gets put on the whiteboard, they hold nothing back.

“Some of it’s really crazy, I’m not going to lie,” Marty says, laughing. “I might have to erase some stuff off the whiteboard.”

The whiteboard is a place where real-life stories become lyrics. It’s a place where Fern and Marty get to be brutally honest and deeply personal. And on Into the Night, it shows.

Years ago, Fern, a pastor’s kid from Puerto Rico, was in a hotel room in Florida hosting a party that spiraled out of control.

He and his friends were drinking heavily and doing cocaine when Fern started not to feel right. He went out on the balcony to catchhis breath when he heard a voice in his head tell him, “Jump. Come on, man. Just jump.”

Thankfully, his friends intervened. For many people, the experience would have been a wake-up call. But from there, it only got worse for Fern as drugs began to distract him from his burgeoning passion for music.

Not long after that experience, a verse Fern laid down on a friend’s track garnered the attention of Sony Music Latin, but what should have been a milestone professionally marked a low point personally. He’d found himself deep in the world of cocaine—so deep that he actually started dealing it.

The lifestyle soon caught up with him. In 2004, he was arrested for drug trafficking.

It was in the chapel of a South Florida prison that Fern re-embraced the faith he was raised with. For the next three years, he dedicated himself to growing closer to God, as well as his family who regularly visited him.

It got him thinking about his next steps when he got out. The experience with Sony confirmed he had what it took for a career in music, and when he was released, music became his main focus.

Marty’s story is different than Fern’s, but in some ways, it’s more relatable to many fans.

“Honestly, I didn’t hit rock bottom when I met God,” he says. “I wasn’t at a rock bottom situation. I was living life, and I was good. But my friends, who I love, brought me to church and I was like, ‘Wow. God is good.’ Everybody’s situation is different.”

The duo released an album online called Misfit, which garnered the attention of major record labels.

The music—with its combination of trap beats, hints of island influences and club-friendly, OVO-style arrangements—is part of what makes them stand out.

It’s this kind of juxtaposition of styles, stories and personalities that make Social Club Misfits so dynamic. They lean into what makes them unique, and that’s why being so honest is so important to who they are.

When Marty and Fern were putting the ideas that would become Into the Night on their whiteboard, a theme began to emerge: They wanted the album to defy labels and challenge how people think about what “Christian” hip-hop really is.

“We’re not pastors; we are musicians; we are artists,” Marty says. “This is a gift God gave us: to write songs. It wasn’t to preach and lead a church.”

It’s an important distinction for the duo. Yes, they write about their faith and their own lives. But their whiteboard—the place where their lyrics are born—isn’t a place where thoughts filter through the lens of what’s safe or what could be heard from a pulpit. It’s raw. It’s real.

When discussing the album, Fern would tell fans this: Get rid of the labels and the preconceptions. On their whiteboard, there’s only honesty.

“Listen to it the same way you would listen to Rick Ross,” Fern says. “We gave you our stories, our point of views. It just so happened, and graciously enough, we met God in our travels and now we speak through those eyes. Can’t help it. Can’t control it. But at the end of the day, we still put out stories like any other mainstream [artist]. We just come through with different angles.”

They aren’t concerned with trying to push an agenda or put their convictions on anyone else. “When you get past religion and you realize it’s relationships, it just becomes that much more real,” Fern says. “That you can see in our music. It’s just real.”