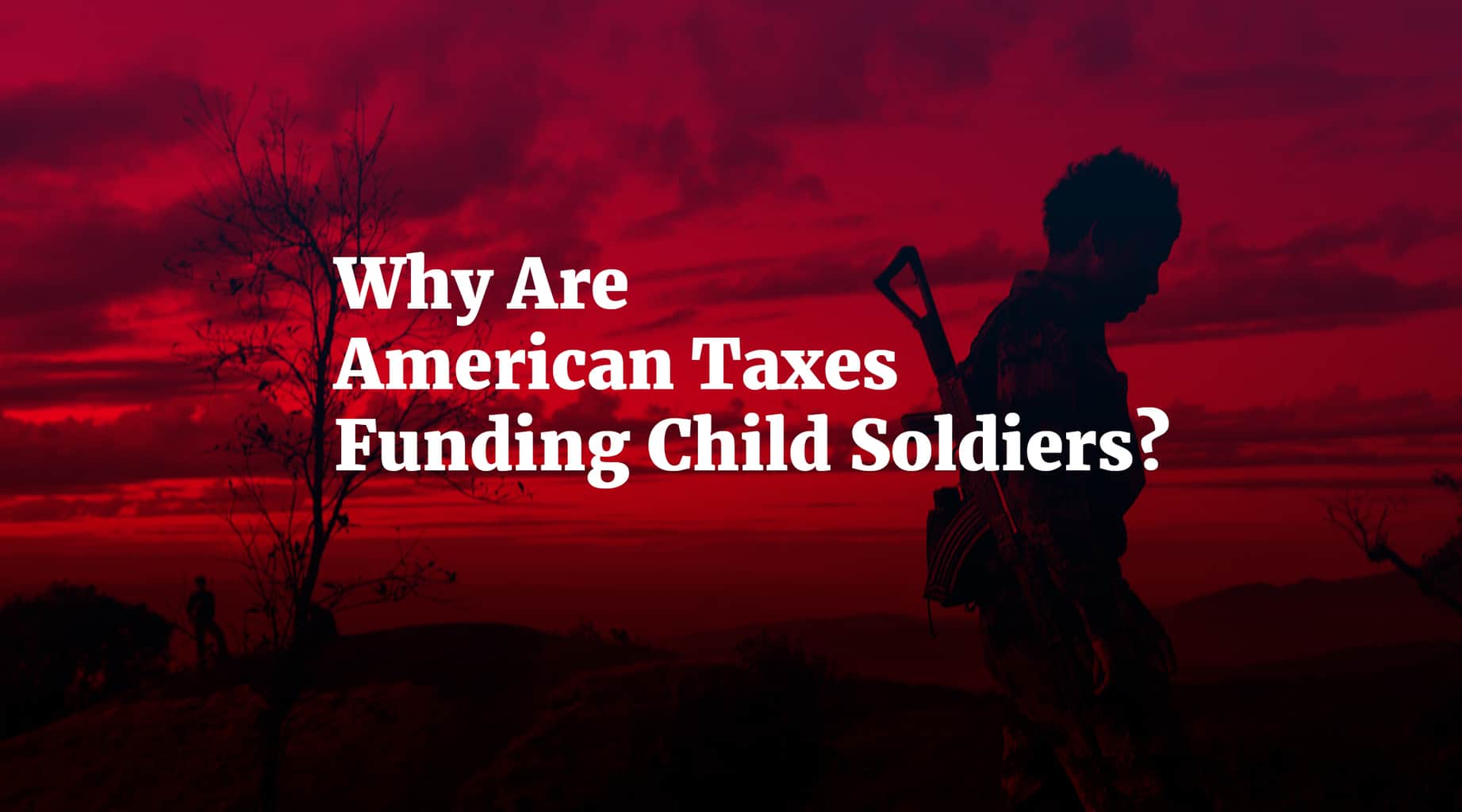 Right now, an estimated 300,000 children globally are being robbed of childhoods. They do not go to school. They don’t spend their days playing with friends. Many no longer see their families.

These hundreds of thousands of children are soldiers, and they are fighting on the front lines of some of the world’s most deadly conflicts.

Across parts of North Africa, the Middle East and Asia, children are frequently recruited—or kidnapped—and forced to fight. According to Human Rights Watch, they are frequently sexually abused and are often subjected to some of the harshest conditions and most dangerous missions—including being used as human shields.

In 2008, the United States decided to take dramatic measures to prevent the spread of the use of child soldiers. As part of the William Wilberforce Trafficking Victims Protection Reauthorization Act of 2008—named for the famous British Christian abolitionist responsible for the Abolition of the Slave Trade Act of 1807—Congress passed the Child Soldiers Prevention Act (CSPA). It was a revolutionary piece of legislation that placed real consequences on countries preying on the most vulnerable.

The law says that no country that uses child soldiers may receive U.S. military aid.

The intention of the law is twofold: Primarily, it attempts to serve as a deterrent from using child soldiers—after all, the U.S. spends billions assisting other countries in a variety of military campaigns across the world. But the law also ensures that American taxpayer money isn’t used for buying weapons or equipment that will end up in the hands of children forced to fight in conflicts around the globe.

In theory, the law strikes a major blow to the recruitment of child soldiers.

But starting in 2010 under President Obama and as recently as September 2017 under President Trump, the United States government has done something that’s flown under the radar of many activists fighting to end child slavery: intentionally ignored its own law. R MAR-APR 060 2018

As a result, American taxpayer money is currently supporting the use of child soldiers in several countries, and the highest levels of Congress, the State Department and White House all know about it.

Every year, the State Department issues the “Trafficking in Persons Report,” a document that tracks human trafficking, slavery, the use of child soldiers and other human rights violations across the world. The report itself says it “is the U.S. Government’s principal diplomatic tool to engage foreign governments on human trafficking.”

The reason why it could be so effective in preventing these types of abuses is because of the potential, significant consequences for countries that violate human rights. Within the report each year is a list of countries the State Department has identified “as having governmental armed forces or government-supported armed groups that recruit and use child soldiers.” If a country lands on the report, that means, according to the law, they should not receive any military support from the United States. Currently, eight countries—Democratic Republic of the Congo, Mali, Nigeria, Somalia, South Sudan, Sudan, Syria and Yemen—are on the list.

“In theory, under [the CSPA], the U.S. government is supposed to be able to block military aid that otherwise would have gone to the states on the basis of their child recruitment,” explains Tim Molyneux, the Child Rights Program Manager at Child Soldiers International, an international advocacy group that works to end the use of child soldiers.

Molyneux says that the CSPA could be a powerful tool to end child slavery, however, he says, “The law has never really been used to its full effect.”

One of the major flaws of the law is that it grants a single person—the sitting president— the authority to issue waivers to any country that uses child soldiers if it is deemed to be in the U.S.’s “national interest” to do so. And since 2008, nearly all of the penalties meant to be levied on countries that use child soldiers have been waived.

At times, Molyneux says, partially waiving these penalties, can make sense. “We have sometimes recommended the use of partial waivers tied very much to efforts to reduce recruitments of children and to prioritize initiatives that are seeking to do that,” he says. In other words, if a country is making significant strides in reducing the use of child soldiers, Molyneux suggests that not entirely withholding military support might be appropriate. But in the last decade, both Trump and Obama have issued wide-ranging waivers via executive order.

During Obama’s time, almost all of the restrictions were waived, Molyneux says. And though Trump hasn’t issued waivers as broadly, he, too, has given most of the countries on the list a pass.

Part of the problem is the idea of “national interest” is so broad. Many of the countries on the list use U.S. military support to fight radical Islamic insurgencies.

In the view of the president, even if those governments are using child soldiers to fight the terrorists, it may be in the “interest” of the U.S. to essentially ignore our own law.

But it also implicates the United States—and its taxpayers—in their recruitment.

“U.S. military aid is obviously this really broad term that applies to all kinds of material aid that the U.S. might give to another country,” Molyneux says. “So it might include arms sales and equipment sales and literally, you know, giving guns to other countries. Militaries that use child soldiers or [use children for] training or supportfor peacekeeping operations and so on and so forth … In many cases, we’re not actually talking about arms sales, it may just be training and other stuff.”

But no matter what the military assistance functionally looks like in individual countries, by ignoring the CSPA by issuing waivers to governments that knowingly recruit child soldiers, the purpose of the law is defeated.

Because of the waivers issued by President Trump, this year the eight countries the U.S. State Department says use child soldiers will receive $140 million in U.S. military assistance. That’s money the law says they shouldn’t be able to have.

“The decision is inconsistent with U.S. law.” “This decision compromises U.S. credibility.” “The decision undermines the [State] Department’s work and harms children.”

These surprisingly blunt statements are three headings of a memo the public was never meant to see.

Officially marked “Not for Further Circulation,” the memo was leaked to reporters last fall and offered a concerning look at how the U.S. is now addressing child soldiers.

The document is a “dissent memo,” a vehicle for officials to raise concerns about actions within the State Department without risking losing their jobs. It made it all the way to the desk of Secretary of State Rex Tillerson before being leaked to the press.

Weeks earlier, Tillerson took an entirely unprecedented step of personally deciding that three countries—Afghanistan, Burma and Iraq—should be left off of CSPA entirely, despite recommendations from State Department officials and intelligence gathered by the department itself.

A representative for Tillerson said he made the decision for “technical” reasons, though his decision may actually be a direct violation of the law.

As the memo reads: “All relevant bureaus, offices and embassies agreed that there was sufficient information to establish that Afghanistan, Burma and Iraq had governmental armed forces or government-supported armed groups that recruited or used child soldiers … Based on those facts, it is difficult to defend the decision not to list those countries as a legal matter.”

But even more concerning than the legal implications of Tillerson’s move is what it could mean for children.

The memo continues, “It has risked sending a message to the authorities in all three countries—and to the international community—that minimal efforts are enough; that we as a government are not interested in upholding international norms, nor in holding countries accountable for ongoing abuses against children.”

A few days after Tillerson’s decision, a horrific campaign of ethnic cleansing broke out in Burma, with the Rohingya community suffering mass rape, executions and displacement.

Many of those forced to participate in the campaign of violence were child soldiers—ones, who, as of November, are left out of the CSPA’s protection.

WHERE WE GO FROM HERE

In July 2017, a new bill co-sponsored by a bipartisan group of four lawmakers was introduced “to ensure effective implementation of the Child Soldier Prevention Act of 2008” and “to prohibit assistance from being provided to, or licenses for direct commercial sales of military equipment issued to, the government of a country whose police or other security forces recruit and use child soldiers.”

However, after passing in the House, the Senate is still yet to finalize the bill.

Shannon Dick of the Stimson Center, a nonpartisan policy research center, says it simply isn’t priority for many lawmakers. “Many members are uncomfortable getting out in front of cutting military assistance to governments that may play a role in U.S. counter-terrorism activities.”

She says in order to move forward, it may take the efforts of voters to get informed and get active.

“Readers can bring this issue up with their members of Congress, and let them know it’s a priority,” she says. “They can educate lawmakers on the CSPA and the issue of child soldiers, as many are not aware of these issues.”

Even though the issue isn’t currently a priority for lawmakers, for children around the world, the stakes couldn’t be any higher.

Social Club Misfits Can Not Be Labeled