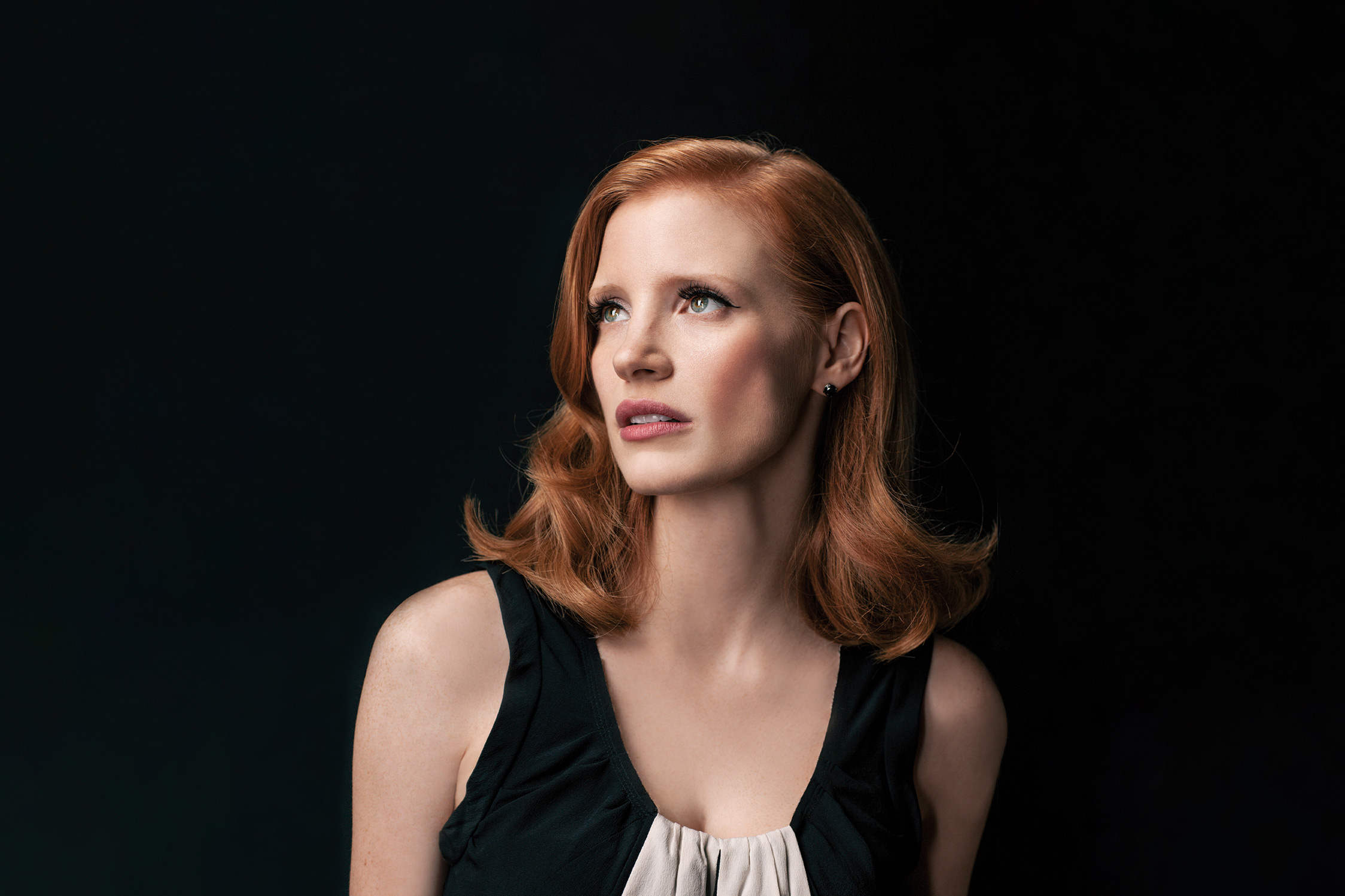 Jessica Chastain is sitting outside, her head wreathed by little flowers blooming on the trees behind her. It’s an idyllic setting, which is appropriate enough, given our conversation.

“My life is deeply based in faith,” she says.

That won’t surprise anyone who has familiarity with her work. She’s one her generation’s most sought-after actors, nominated for two Oscars and the winner of a Golden Globe for her work in Zero Dark Thirty. But for many, her most famous work to date was opposite Brad Pitt in Terrence Malick’s Tree of Life. That movie’s sweeping grandiosity puts it among the most important movies about the Christian faith of the last decade, and it’s anchored in Chastain’s rapturous performance.

Now she’s starring in another touchpoint, one that will interest Christian audiences from a slightly different angle. The Eyes of Tammy Faye puts a spotlight on the mother of all televangelist scandals, charting the astonishing rise and sudden demise of the Jim Bakker and Tammy Faye Messner PTL empire (after her divorce from Bakker, Tammy Faye remarried a building contractor named Roe Messner).

Hers is a story that’s widely known but poorly understood, with most Americans just remembering a few broad plot headlines of the story and, of course, the image of the late Messner herself — caked in makeup, lips quivering, rivers of mascara running down her cheeks as the organ music floats skyward to glory.

It’s an image Chastain wants to correct. The Eyes of Tammy Faye is a big role for Chastain, but the movie is also a passion project. She thinks you’ve got Tammy Faye wrong. And if the public imagination of Tammy Faye’s life can be corrected, maybe it’s understanding of God can be, too.

“Tammy Faye was someone who could reach those who felt like they had no connection to grace and to remind them that for her — and this is also what I believe too — that love is for them too. That’s what it’s based on.”

The Eyes of Jessica Chastain

Chastain grew up in Sacramento, California, raised by her mother who was just 16 years old when she was born. Chastain says her childhood was challenging, and she wasn’t raised with any real context of faith. “My family had some negative experiences in organized religion, which is why they chose not to raise their children in it,” she says.

So, Chastain had little connection to the Bakker industrial complex outside of the cultural schadenfreude, which was fodder for Saturday Night Live and late night TV hosts by the time she was entering middle school. “I knew the joke of Tammy Faye,” she says. “The makeup running down her face and all that stuff.”

It wasn’t until later, after her career had taken off, that she had the opportunity to revisit her understanding. That happened during the press tour for Zero Dark Thirty, when Chastain stumbled across the 2000 documentary (also called The Eyes of Tammy Faye), which is narrated by Ru Paul. Chastain was immediately hooked.

“She’s amazing,” Chastain recalls thinking at the time. “Why hasn’t anyone made this movie?”

Chastain started to reevaluate her notion of Tammy Faye, and what she found was surprising. For one thing, the image of Tammy Faye with streaks of mascara down her face appears to be an example of the Mandela Effect, as there’s no actual footage of it to be found (although it was a regular gag on SNL where Jan Hooks would regularly skewer Messner).

For another thing, as Chastain says, Messner “was punk rock.” Although rarely remembered now, Messner was welcoming of the LGBTQ community at a time when most American Christians shuddered at the association, and reached out to HIV/AIDS patients when vanishingly few other public figures, Christian or otherwise, would.

“It was shocking that this televangelist did this,” Chastain says. “Especially in this world, controlled by white men. And here she’s just kind of like, ‘God loves everybody. He loves you just the way you are.’ What a radical thing to say and to remind Christians of.”

Though Messner is still remembered for her eccentricities (real or imagined) and the scandals that toppled her husband’s ministry, Chastain is hoping the movie and her performance will spark a reevaluation.

Tammy Faye LaValley was born in Minnesota to Pentecostal preachers. She met her husband Jim Bakker at North Central Bible College in Minneapolis, and the two traveled across the country, preaching and singing in churches. They ended up in Virginia, where they helped start The 700 Club and became associated with Pat Robertson and other early power players in the Moral Majority. By the time they started The PTL Club in 1974, the couple’s reach had grown vast and would eventually include a Christian theme park that rivaled Disneyland in size and popularity.

It was during this time that Messner, previously known for adding sentimental touches to her husband’s preaching, began taking a more active role in speaking out on topics she cared about. In the mid-’80s, near the peak of the AIDS epidemic, she welcomed a gay Christian minister named Steven Pieters to The PTL Club. Pieters spoke openly about living with AIDS and the ostracization he felt from his fellow Christians. “How sad that we as Christians, who are to be the salt of the earth, we who are supposed to be able to love everyone, are afraid so badly of an AIDS patient that we will not go up and put our arm around them and tell them that we care,” she said on the show.

This was a seismic event in American Christianity, but it was overshadowed by growing scrutiny of the couple’s opulent lifestyle and swirling rumors of Bakker’s sexual infidelity, including a rape allegation from a church secretary named Jessica Hahn. Those charges would be the eventual downfall of PTL, the Bakker empire and their marriage. The movie takes them seriously.

What Chastain is arguing for is a more nuanced understanding of Messner’s legacy, one that not only includes the fallen empire, but also the steps Messner took in her life to reach out to marginalized groups that most people ignored.

Chastain’s physical transformation for the role has gotten a lot of attention. She estimates that she spent about four hours a day applying makeup and prosthetics (though one session took nearly eight hours) but Chastain was careful about making sure that her performance was more than a makeup trick. She did exhaustive amounts of research on Messner’s life, reading tomes of research, interviewing her family and friends and watching “every single video.” She’s been doing this for a decade now, ever since she saw the documentary, and she feels like she has a good handle on what kind of person Messner was.

“Her voice took up a lot of space,” Chastain said of her role. “Her mannerisms, her comedy, her singing, her costumes, everything was just loud.”

To Chastain, this is a big part of why Messner has been misremembered. People often don’t know what to do with women like Messner, whatever their religious persuasion, so she was parodied into an object of scorn and ridicule to avoid dealing with her on a more dimensional level.

“I think in society, a loud woman was a woman that you really had to contend with,” Chastain says. “That was threatening, I think, to certain groups.”

So for Chastain, The Eyes of Tammy Faye isn’t just about how we’ve collectively forgotten who Messner was. It’s about how often women who don’t fit the mold will find themselves crammed into one anyway, both in life and memory.

“A lot of time, we’re telling women how to present themselves in the world — pantsuits, short skirts, you’re wearing too much makeup, you’re not wearing enough makeup — there’s so much attention into how a woman decides to show herself,” she says. But in this regard, she says, “there was a fearlessness that Tammy had.”

Chastain says that the reason Messner was able to be fearless about who she was is because she trusted that God had made her that way. That’s a message that Chastain is clearly passionate about in her own life, and she hopes it’s something that Christians can take to heart.

“I’m hoping that those who see the film are reminded of that,” she says. “And maybe some who, like me, did not grow up with any kind of connections to an organized religion, it will make them feel loved beyond the present, love beyond this world. And perhaps that’ll make them feel closer to humanity.”

There’s a moment in the movie where Tammy Faye delivers a message that Chastain feels sums up the woman’s whole life, so much so that Chastain’s committed it to memory.

Chastain gets emotional as she says this, and she takes a moment to compose herself.

Can one movie correct a society’s opinion of a person? It’s hard to say. But if Saturday Night Live can create a fictionalized doppelganger that becomes more real in people’s minds than actual person, then it’s not crazy to think that another piece of media can usher in a reappraisal. And if that can happen, then maybe Chastain’s reminder can stick, too.