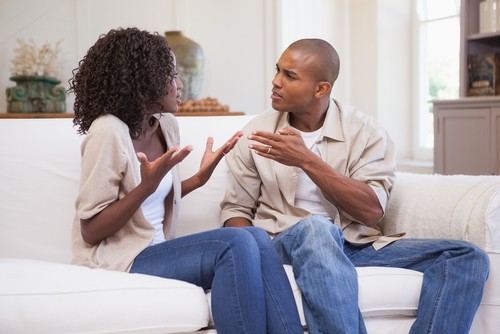 It’s often unspoken but there’s one lie common in church circles I want to address. It’s an untruth all too often +assumed: “Christians are not supposed to argue.” My wife, Kasi, and I have learned the benefit of healthy arguing in our marriage, but the truths I share below are not just for married couples. When it comes to knowing how to argue, these truths apply to all relationships.

One of the most practical ways to work on your marriage, friendships, or other relationships is by learning how to communicate well. Actually, let’s go a step further. Healthy joy in a healthy relationship will allow you to have healthy conflict resolution. Basically, you’ll know how to argue well. Every solid relationship requires the art of arguing.

When the phrase definition of argue is searched on Google, the following will pop up: “give reasons or cite evidence in support of an idea, action, or theory, typically with the aim of persuading others to share one’s view.” Is there a way to argue well? You may be thinking, Wait. Couples are not supposed to argue. After all, isn’t every day in marriage like an episode of The Bachelor, with helicopter rides, dinner on the beach and your partner swooning over every word you say? Unfortunately, reality TV is far from reality, because in real life there are real couples, real friends and real business relationships that have very real arguments. In fact, people in relationships who say they don’t argue typically fall into one of three categories:

You Must Care Enough to Argue

One of the worst feelings in the world is not caring enough to communicate your frustrations, letdowns, and needs. Couples and friends who don’t care enough to argue are probably close to giving up. Some of the most difficult statements to hear your spouse or friend say are “It doesn’t matter anymore. Do whatever you want. You just do your thing, and I’ll do mine.” At that point, unless something changes, you can be sure the end is near. Joy has left and is nowhere to be found. Unfortunately, happiness is found only in the times when you are away from each other. In contrast, when you care, it means you want to do whatever it takes to resolve the issue. You’re willing to talk, disagree, and then make the necessary changes and sacrifices. Why? Because you love each other and care enough to work it out. Joy in marriages, family relationships and friendships is that important.

Arguing Well Is About Learning, Not Winning

When you listen to the needs, worries and frustrations of the other person and learn how to serve each other better, then you have victory in an argument. There are times when you can win a debate and still lose in the long run. Too often we sacrifice the health of our relationship to get in the last word. Relationships are about learning, not winning. When a disagreement takes place with healthy and mature communication, then sacrificial changes are made to show each other beautiful, unconditional love. That is true winning.

A good argument is not one person doing all the talking while the other person does all the listening. That is called a lecture. Arguing well is one person talking while the other listens without interrupting. Then it becomes time for the talker to become the listener who avoids interrupting. Also, a good talker communicates with kindness, self-control and humility. A good listener truly concentrates on what the other person is saying and isn’t distracted by thinking about his comeback. He doesn’t make it an opportunity to bring up her shortcomings from the past. For example, Sarah says, “John, what you did today really hurt my feelings.” John retorts, “Oh really? What about that thing you did to me six weeks ago that really upset me but I never told you about?” (Because I’m a guy and I don’t communicate…ever… ever…ever.)

If you’re continuing to argue about the same things, it means one or both of you are not listening or learning. It’s been said that the definition of insanity is doing something over and over again and expecting a different result. For continual growth, there has to be an unwavering effort to change to meet the needs of the other person. When disagreements come, we must communicate, listen and make the necessary changes.

Argue for the Glory of God

Christian marriages are not about us as individuals or even as couples. They’re about something much bigger than us. According to Ephesians 5, marriage is the visual illustration God has given the world to show Christ’s relationship to His bride, the church. “ ‘Therefore a man shall leave his father and mother and hold fast to his wife, and the two shall become one flesh.’ This mystery is profound, and I am saying that it refers to Christ and the church” (verses 31–32). Our relationships preach a gospel message to the world; that truth alone makes marriage eternally important. It’s necessary for us to ask ourselves this question often: What kind of message is my marriage preaching to my children, my church, my family, my friends and a watching world?

When we understand that our lives, our actions and our relationships are designed by God to bring Him glory, then our happiness is not the most important thing. God is most important. When He is most important, then we strive to live and love in a way that looks similar to the way that Jesus lived and loved.

Shane Pruitt and his wife, Kasi, live near Dallas, Texas, with their five children. Shane has been in ministry for more than 17 years as a denominational leader, church planter, and traveling communicator. He holds a B.S. in biblical studies and a PhD in Christian counseling. Shane serves as Director of Evangelism for the Southern Baptists of Texas Convention. A popular blogger, Shane has written for RELEVANT, Christianity Today, the Christian Post, ChurchLeaders.com and other online journals. For more information, visit shanepruitt.com.

No, You Don’t Need a Spouse to Complete You

The Church Needs to Refocus on the Concept of Character