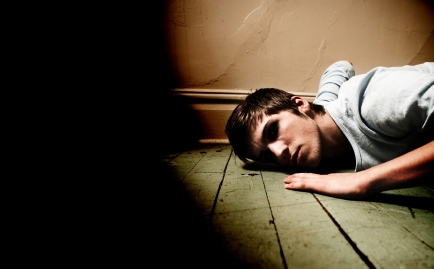 Do you remember the brief and ill-fated animated TV show, God, the Devil, and Bob? It blinked by pretty fast a few years ago, but I managed to catch a few episodes before this quirky show got yanked. It was too spiritual for non-religious people and too edgy for most Christians. But it gave me one of my favorite moments of God-oriented network television ever.

Here’s the setup: Bob is an ordinary family guy living in Detroit, Mich. He’s chosen to be a contemporary Job in the battle between a fatherly old God and a tail-swishing Satan. Bob has problems like any other person, as well as major issues with both of the players in this power struggle. In one episode, Bob is wrestling with some tough issues at home with his own kids and wife, and while stopped at a railroad crossing, he turns to God in frustration.
“God,” he says, “I just need to know. If you’re so good, what is the point of pain and suffering? Why do good things happen to bad people? I mean, what’s the secret?”

“I’d be glad to tell you, Bob,” says God, smiling and gentle. He leans over and starts to talk, gesturing energetically. But at this moment a train comes hurtling down the tracks and its noise blocks out the entire explanation. The light of the train silhouettes God and Bob as they nod and talk, and the noise fades just in time for us to see Bob grin and say, without a trace of irony, “Wow! That makes sense! Thanks so much for explaining that to me, God! I think I understand now!”

If only it were so simple to get an answer like this from God. Why would a loving God allow pain and suffering? That question must have been one of the very first asked in the new green world—not long after Adam and Eve left their walled garden and certainly before one of their boys killed the other.

There’s enough aching loneliness in every heart—no matter what your marital/dating status, financial success or job satisfaction—to ask that question. At some point, every honest person is going to run into the question of why their heart hurts so much—let alone all those other catastrophe-stricken people out there somewhere—and why God, if He loves them, doesn’t make it all better.

I have struggled with depression, often unnamed and unrecognized, ever since I hit adolescence. I just made it worse by telling myself I shouldn’t be feeling this way. I have a wonderful family, I’m young and healthy, and I have everything I need to be content. Why be sad? My resentment and self-absorption eventually became an issue between me and the God I was brought up to trust. I saw, too, deep physical and emotional wounds in other friends’ lives. And at some point, I gave up asking God why. I mean, thousands of years of philosophers and theologians haven’t been able to completely explain away the problem of pain—how could I?

And all those pseudo-spiritual answers don’t sit right with me either. We’ve all heard them: Pain is God’s way of strengthening our character. Suffering makes us look forward to a better life in heaven. Pain is a result of sin. Trials help us get closer to God. All of these probably have an element of truth, but they still feel pretty one-dimensional. Besides, if God is all loving and all-powerful, couldn’t He find a kinder and gentler way to accomplish these goals? And none of this fits every situation or makes me feel any better when I’m in pain. Words are weak in the face of pain, especially pain that is unnecessary and unexpected. Words have no power over pain that seems to come from the whims of a capricious and unknowable God.

And that, I think, is the danger of looking for an answer to this question at all. Human language and experience are just too limited for God to give us a complete explanation of pain and suffering—even if He could be compelled to do so. Bob got a distinctly different response to his questions than Job did; I think there are (of course) major differences between Bob’s cartoon God and the living, breathing God of the Bible.

When Job was asking God his own questions about suffering, and his friends were giving him all those suitably spiritual rationalizations, God roared back out of a whirlwind: “Where were you when I laid the foundations of the earth? Tell me, if you know so much. … Are you as strong as God, and can you thunder with a voice like his?” [Job 38:4, 40:9] Job had his questions flung back in his face, along with the glory of God like a crackling firestorm. The God of the Bible is not compelled to answer questions. He loves us, yes, but with a white hot intensity, with the hot breath of a lion. Like Aslan of Narnia, He is not a tame lion. His love may be the most dangerous thing about Him, because He swears to love us literally to the death of ourselves.

The only full answer to this question we’ll get in this world is sitting right beside us. God tends to come alongside me and absorb my angry questions in silence, then quietly send fingers of peace down into my heart, like roots after rain. Not answers. The entire thrust, it seems, of God’s present interaction with us is not toward convincing us through His words until we have no choice but to accept Him. That would not be a free choice. No, instead it is to present Himself to us at our side, in the midst of our pain, as friend, holy God, sacrificial Savior—warrior and tender spirit, until we take Him not for His answers—because they are too much for us—but for His comfort, which is always just enough.

Be like Bob, and Job and pester God with your questions and your pain. He loves to give Himself away.

People who have asked these questions first, and found better ways of answering:

Telling the Truth: The Gospel as Tragedy, Comedy, and Fairy Tale, Frederick Buechner

The Problem of Pain, C.S. Lewis

Til We Have Faces, C.S. Lewis

Mute Math: A Look at the Beginning

Where Am I Wearing: Baby Clothes