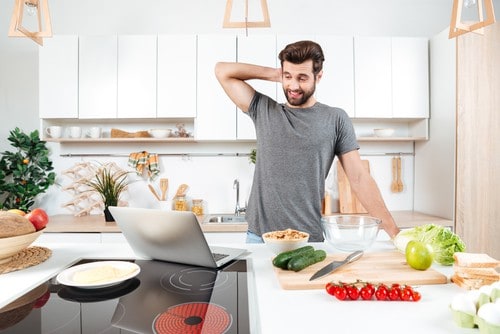 Another unflattering study on millennials says we can’t cook.

Though millennials love watching videos and TV shows about food, they prefer not to cook it themselves.

But with new meal-kit subscriptions gaining popularity, could the tables be turning back again?

Porch.com surveyed 750 people across the millennial, Gen X and baby boomer generations, and found that only 5 percent of millennial and Gen X respondents consider themselves “very good” at cooking. And despite seeing themselves as potentially “quality” cooks, millennials who prepared their own meals at home confessed that 18 percent of those meals came from frozen or prepackaged foods.

On average, millennials only cook for themselves 4.3 nights a week, meaning that they are dining out at least three times per week.

Half of millennials shared that they wouldn’t be able to completely roast a chicken or cook a ribeye steak, and only 47 percent of them reported being able to properly braise meat. Eggs posed some of the biggest challenges, as multiple young people found cooking an over-easy egg, an omelet or poached eggs much more difficult than older Americans.

As far as utensils go, 56 percent of millennials could identify a garlic press. But only 64 percent could identify a butter knife. Come on, guys. On the flip side, boomers passed this one with flying colors. The only utensil they (40 percent) were unsure of was the salad spinner.

The study ultimately found that each passing generation eats fewer at-home meals as children and cooks even fewer meals for themselves as adults. However, there are plenty of advantages to teaching children how to cook, and it will actually help to prepare them for their future.

Hear Me Out: ‘Pirates of the Caribbean’ Is an Allegory for American Democracy