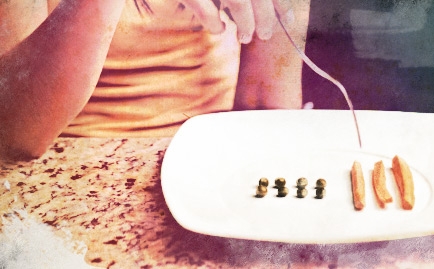 74 Die in Uganda from Terrorism

When Laurie threw up, she listened to music through earphones to drown out the sound of purging her food. And the sound of her crying.

Laurie’s (not her real name) struggle that led to bulimia nervosa started when she was 13. “I would have never felt negatively about my body if not for others,” she says. “I started to compare myself to girls who made mean comments about my body, and the real dagger was when my mom started making comments about my weight and putting me on diets.”

Laurie says she believed she needed to change—that she wasn’t worthy of love because of the way she looked.

“Negative feelings built up, and I didn’t know how to seek help, pray or ask God what His thoughts about me were,” she says. “I turned to food. When I look back, my addiction was the very thing my mom demonized. Food was sinful, bad and evil, and I was addicted to it.”

In high school, Laurie went from binging on food to purging it afterward by vomiting. “After binging and throwing up, I cried. I hated it,” she says. "By God’s grace, after about a year of throwing up every day, I stopped my bulimia cold turkey, when I heard on the radio that girls with bulimia could be infertile.”

Although she stopped purging, Laurie continued to binge and harbor anger, something that would continue through her years at college.

Laurie’s battle with food addiction included anger and legalism, and although she says God has given her complete freedom from her addiction now, the church didn’t help her find it. Quite the opposite, actually.

How the Church has failed

The struggle with food and body image is widespread. One out of every three American adults is obese, and two out of every three are overweight, according to the U.S. Centers for Disease Control and Prevention. In addition, the National Institute of Mental Health reports one in five women struggle with an eating disorder. These numbers can’t be ignored. But the lack of a response from the Church is glaring.

Laurie says her struggle began when grace was replaced by legalism, something taught to her at church.

“Church is not always a grace-filled place, especially where I grew up," she says. "It focused on actions—telling us we could make ourselves pure by doing the right things, which is a big lie. I was obsessed with being perfect, but I had a lot of anger because I wasn’t perfect. I turned to food to placate myself and feel happy.”

Lesley Goth, a clinical psychologist who specializes in eating disorders, provides Christian counseling in Broomfield, Colo. She counseled Laurie. Goth agrees Christian pastors and church leaders focus on actions and don’t know how to get to the root of our issues, where God can really heal us.

“Most churches look at the outward behavior. If someone is sad, depressed or anxious, she doesn’t ‘look’ Christian,” Goth says. “People don’t know how to deal with that and be real. Instead they say, ‘Don’t do that behavior’ or, ‘Don’t talk about that.’”

According to Goth, trauma and anger are the main forces underlying eating disorders. “When people don’t acknowledge and deal with anger or feelings associated with trauma, they find other coping mechanisms, like starving, binging or over-exercising.”

Even though eating disorders are prevalent today and gluttony is mentioned in the Bible, Billy Edwards, a pastor in Hewitt, Texas, says the Church hasn’t focused on them in a transforming way. “I’m not too sure many churches address gluttony, at least not often and with much helpful application,” he says. “It’s true nothing ever changes until the root issue is found. There are certainly several reasons why people overeat, and until those reasons are discovered and dealt with, the behavior will remain.”

Edwards, who admits to struggling with his own weight and body image, says food is something he convinces himself he deserves. “I use food as an elixir, which is a nice way of saying ‘drug,’” he says. “There are pockets of my life—eating one of them—where I am not very disciplined.”

According to Edwards, the Church has various reasons for neglecting these very issues. “Churches of all stripes tend to focus on many other things—personal redemption, social issues, community ministries, etc.,” he says. “I doubt weight and body image are on the radar of most church leaders, at least in a significant way.”

Even when body image issues are “off the radar,” they don’t lose their power. For Laurie, college at Baylor University was a good distraction—at first. She found her identity in other things besides her physical appearance—like what she was studying and her friends. Her binging was hidden. But senior year, when things didn’t happen as planned with her degree, things took a turn for the worse.

“My anger came out in full-blown depression,” she says. “I didn’t know where God was. If He were there, I thought, He would have rewarded me for all of my hard work in school.”

Food was no longer an effective comfort, and Laurie slid further into depression. She started wearing dark clothes and heavy makeup, and according to her, being mean to everyone.

Laurie says: “No one at church knew how to respond to me. People were freaked out by my depression but didn’t know how to deal with it. I felt so alone.”

Laurie’s anger, depression and addiction came to a head. “There were times when I was so angry, I didn’t know how to handle it,” she says. “I would try to hurt myself just to feel. I was so numb.”

One day, she attempted suicide by trying to strangle herself. She says the pain snapped her back to reality and reminded her she could still feel. She was still alive and she didn’t want to die. After that day, she sought counseling for the first time.

“Everything that happened was under the umbrella of God’s grace; I see that now,” Laurie says. “When I started understanding how He sees me and how He loves me, it was a big, freeing step for me.”

Edwards adds that although he himself struggles, finding a “way out” from body image issues will come when people grasp that it all stems from spiritual issues. He quotes the sixth chapter of First Corinthians, saying the body is a temple of the Holy Spirit. Even though the context for this is sexual immorality, he says there’s a universal principle that our bodies belong to the Lord.

Goth agrees our bodies are God’s temple, adding that we should worship Him through them and because of them. But first, recovery from eating disorders must be experienced on two levels: freedom from the behavior (i.e. starving, binging, over-consumption) and freedom from lies. “The Enemy (Satan) is not very original. He tells us all the same lies,” she says. “When you can discern the Enemy’s lies, you can find freedom from them by really understanding how Jesus sees you.”

For Laurie, those lies included believing she was unlovable, that she could find comfort in food and that she could earn favor with God by doing the “right” things.

“These lies started dying in the light of truth when I focused on what God said about me (in the Bible),” she says. “Addiction is a blind struggle with our flesh. Instead of seeing our sin through God’s eyes—and thanking Him for saving us, because we will always fail—it becomes a fight to prove we can be perfect. In the end, we make addiction about us and nothing to do with God.”

Goth has seen many patients fight this addiction and come out victorious, as well as experienced it herself. “Doing recovery God’s way is so rewarding, and there is so much hope to really find freedom,” she says. “It’s awesome when God can get a hold, and we can submit to His truths.”

Laurie says freedom for her means she doesn’t obsess about what she eats or how she looks. It doesn’t mean she’s perfect—she still overeats at times—but it’s no longer connected to filling a void or dealing with her emotions in an unhealthy way. “It means turning to God," she says. "Believing truth about my value as His child, how He loves me and cherishes me for me as I am, not the lies of my ideal self or who I think God wants me to be. As a result, no guilt or obsession follows, only freedom.”

“The reason why [my] church wasn’t effective is because it focuses on symptoms and not the disease," she says. "Even I was focusing on what I was doing, not why. But Jesus just wanted to come into those dark places and to love me in those areas. The life He has for me is not one where I have to settle for living with my pain and addiction. His abundant life means complete freedom and healing.”

9 Things to Know Before You Turn 30