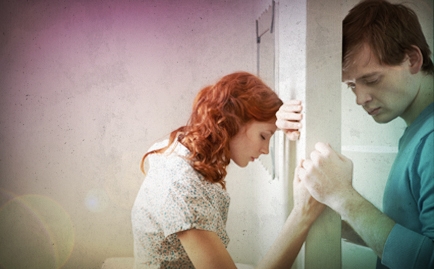 [Editor’s note: This is the first of a two-part series detailing the damage that pornography and sexual addiction can do to a relationship. Check back tomorrow to read about the other side of that addiction, written by John’s wife, Rachel.]

Hi, my name is John, and I was a sex addict.

I am also a believer in the death and resurrection of Jesus Christ and am married to an amazing and beautiful woman of God.

To be honest, I thought my addiction would go away with marriage, thought I had been prepared for the strong pull of lust and pornography by a four-month fast from my personal computer, thought I was strong enough to stay pure, thought that the safeguards I had built against myself were enough, thought I wouldn’t look at pornography ever again.

How wrong I was.

Be alert and of sober mind. Your enemy the devil prowls around like a roaring lion looking for someone to devour. 1 Peter 5:8

The truth is, the temptation of sexual addiction doesn’t lessen with marriage at all. On the contrary, it actually becomes stronger. In spite of what we see today in movies and television, marriage is hard, and true sexual intimacy within marriage is even harder. Unfortunately, while behaving selfishly is easy and natural to our flesh, serving takes a great deal of hard work and sacrifice. And although some find it easy to love, serve and sacrifice, it certainly isn’t a first instinct of mine.

Therefore, in spite of the fact that my wife is everything I could want or ask for in a woman, my flesh nonetheless turns to the "thrill" of feeding an addiction to sex that began when I was 12 years old. An addiction that continued to grow in strength into my teen years and throughout college, eventually leading to daily porn use and several sexual flings that ended in dramatic heartache. As commonly happens with sex addicts, my use of pornography wrought havoc on my ability to have healthy relationships with "real girls,” and it wasn’t until a year after I graduated from college that I found even a vague semblance of healing from what had become a serious addiction to sex.

In early 2010, I asked my girlfriend to marry me. She said yes, and a few long months later we were married. It was a happy and and joyful day, to be sure, but I felt more relief than anything else. "Finally," I thought, "my struggle against pornography is over." Although I was confident that I would be “OK,” I nonetheless felt it necessary to try to explain my addiction to my wife. Like a fool, I tried to do it gently and without going into too many specifics or actually explaining the ugliness of the sin in which I had lived for so long. "Things will be fine," I told myself. "After all, we can have sex whenever we want now."

And without further ado, we started our new life together.

The first couple of months went great, and because I didn’t have much temptation, I began to let down my guard. And suddenly the streets seemed to fill with alluring girls in all-too-tight clothing. The world around me was one humongous temptation, and it seemed that everywhere I laid my eyes was yet another source of temptation. Even worse, every website I visited seemed to have some woman or another inviting me to indulge in a bit of lust, to relive the days of pornography and masturbation. Convicted, I tried to communicate these things to my wife, but I was ashamed by my sin and the fact that I was struggling, and avoided being clear on the true nature of my struggle.

And so the barrage continued.

Finally, four months after my wife and I were married, my defenses—weakened by my fear of the consequences and a concurrent lack of support—completely crumbled; I again used pornography. Not far away were my old tormentors—guilt and shame—and that night I could barely sleep from the sense of condemnation that washed over me. I hated myself for what I had done; this sin didn’t just affect me now, it also affected my wife. I had betrayed her trust. I felt worthless, faithless and disgusting. A Judas. A traitor.

The next day I could barely look my wife in the eye. I knew I had to truly tell her what I had done. I didn’t want to live a life of deceit, constantly lying to the very person closest to me. I wanted the intimacy of a marriage without deception or secrecy, no matter how terrified I was to confess my sin. Slowly, painfully, I told her what I had done.

She was devastated. All the love and trust and intimacy we had worked so hard to build for the last four months was called into question and our marriage was shaken to its very core. I feared it wouldn’t stand, and I wouldn’t have blamed her in the least for walking out altogether. She had every right to do so.

Before I was married, I believed I could overcome the temptation of lust and pornography by mere force of will; while after my wedding day, I assumed all sexual temptation would simply disappear. The truth is that I, in and of myself, am completely incapable of conquering an addiction to sex, and being married just raises the stakes. Neither is permissible to gloss over the sin itself in order to save face or avoid shame.

Sexual addiction is not a thing to be taken lightly. It is a destroyer of relationships and a corrupter of the body of Christ. Satan uses it against us to crush us and divide us one from another as we cover our shame with lies or half-truths. We simply cannot master it without the power of Christ in our lives, and we must not be reluctant to make any sacrifice in order to break the hold of such sins. To make any excuse for sin is to allow it an ever-widening foothold in our lives, and we must be utterly ruthless and aggressive in rooting it out.

John Buckingham is a wordsmith, English teacher, former
homeschooler and international bumbler. He maintains several blogs
and has recently returned from China, where he learned that he’s
neither as humble nor as patient as he originally believed.

Rebelling with the Next Generation