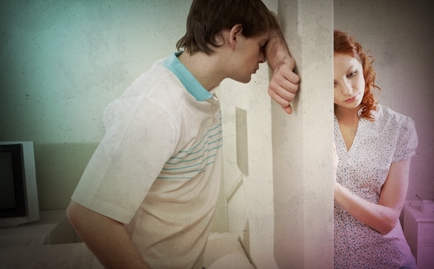 [Editor’s note: This is part two of a two-part series. Click here to read the first part, written by Rachel’s husband, John.]

It had happened innocently enough (if that’s even possible)—he was surfing and ran across some inappropriate pictures. Stumbling across inappropriate pictures turned into looking for them and then actively seeking out pornography to watch while I was falling asleep in the next room, wondering why my husband hadn’t come to bed with me on our four-month anniversary.

Not only was I shocked when he told me, I was also hurt, confused, scared, betrayed and angry. I felt like my world had just been turned upside down; my safety and security were crumbling away. His confession was overwhelming.

Within minutes, the foundation of our marriage was shaken. The trust we had built was destroyed. I no longer felt safe or loved. I was suddenly bombarded with lies—he doesn’t find me attractive; it’s my fault he strayed; I’m not beautiful; I’m not sexy; I am a horrible wife; I’m a failure; he is stuck with me; he doesn’t love me … these seemed to instantly go from ridiculous to quite possibly true.

Through God’s strength (and only through His strength—my first instinct was to withdraw and never trust my husband with my vulnerability again), I met my husband’s gaze and told him I forgave him and still loved him. And then we proceeded to talk about the crippling consequences of his actions to our marriage.

The conversation was eye-opening not only about the reality of lust, but also about its devastating effects. While I had known for quite some time that he struggled with lust, I had refused to really admit it to myself and deal with it, assuming it would dissipate with marriage. I didn’t understand the reality of lust, and no one had ever openly explained it or been willing to talk about it. Even in the church, it was always glossed over: “Men struggle.” End of story. How far from the truth that is! That day, I listened to my husband tell me that he not only struggled with lust, but was also addicted to sex.

For those like me who don’t know what sexual addiction is or how severe it can be, here is a definition. According to allaboutlifechallenges.org, "sexual addiction is, in its simplest form, a normal sex drive that has become obsessive to the point that behavior is out of control. … Sexual addiction can take on many forms, from the use of pornography and masturbation to repeated sexual affairs, patronizing prostitutes, and voyeurism. … The many forms of sexual addiction have one thing in common, the behavior is done in secret, and the sex addict becomes skilled in hiding this secret life from those closest to him."

This isn’t just looking at girls in low-cut tops, and it doesn’t go away when men can have sex with their wives, as I had assumed. In fact, according to my husband, it has nothing to do with wives and love. Also, what I hadn’t understood is that it is an addiction—like alcoholism—and should be taken seriously.

Though I still don’t fully understand sexual addiction and lust, my husband and I talk about it, how he struggles and how it affects me and our relationship. We have both come to realize the importance of open and honest communication with each other, even when it isn’t easy to talk about this struggle. When I go to bed early, I ask him to be careful—a practice he says helps him fight against the temptation. In the morning, I ask him if anything happened the night before. This open communication keeps us accountable to each other; accountability is key in fighting this battle since it brings light to what was hidden. My husband is not only accountable to me, I know that he discusses his struggles with men in his life, which is incredibly valuable, in my opinion, since they can understand the temptation and struggle in a way I simply cannot. The struggle with lust and sexual addiction is not a battle that can be fought alone since sin thrives in darkness; shedding light on the struggle lessens its power.

Not only does open and honest communication help my husband fight this battle, it is also necessary for a healthy marriage. When my husband felt ashamed because of his struggle, he withdrew. Sensing his withdrawal, I would close off as well rather than trying to be open and run up against the wall I felt my husband building. Our lack of openness led to us not sharing life with each other, including not discussing the difficulties and trials we were facing. To be honest, the less we connected and communicated, the less intimate I wanted to be with him. So I wouldn’t initiate sex as much and was more likely to reject his advances, which caused him to not initiate sex as much either. It was a vicious cycle, because the longer we went without having sex, the harder his struggle with lust and sexual addiction became.

The struggle against lust and sexual addiction is serious and certainly not something to blow off or take lightly. It isn’t simple, and it doesn’t go away with marriage and the accompanying sex. It has far-reaching consequences that affect every aspect of life—from the physical to the mental and emotional to the spiritual—and not just for the partner struggling with lust and sexual addiction, but also for the other partner as well. It is a battle to be grappled with that cannot be fought alone. Vulnerability and communication, along with accountability, are crucial since they unite husbands with wives and/or with brothers in Christ that can fight alongside them. But most importantly, we have a fearsome warrior in God, who loves us, provides us with armor to withstand the schemes of the devil, and fights for us. This struggle against lust and sexual addiction is not an easy one, but it can be fought.

Rachel Buckingham just returned to the States from living in China, where she gained an appreciation for tea while maintaining her love of coffee. She is married, writes freelance, blogs avidly, teaches English, loves connecting with people, and most importantly seeks after God to surrender her life to Him for His glory. Feel free to contact her at [email protected] or at www.rachelbuckingham.wordpress.com.