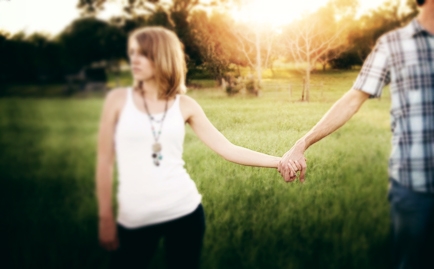 One Night in the Homeless Hotel

Christians spend a massive amount of time trying to discern God’s will in their lives. Since it can be difficult to understand and hear God anyway, why do we wrestle with questions He’s already answered? In the Bible, God makes it clear that Christians and non-Christians shouldn’t marry and He gives us a myriad of stories and lessons as to why this isn’t good for either the Christian or the non-Christian.

Over and over again, the Jews in the Bible were told not to intermarry with other nations who didn’t share their faith in the one true God. King Solomon ignores this and marries a whole slew of women and eventually watches himself and his kingdom drift far from God. Samson found himself in messes because he continuously went after women who didn’t share his faith. In 2 Corinthians 6:14, Paul bluntly says Christians shouldn’t be, “yoked together with unbelievers,” a passage generally understood to refer to marriage among other things.

When deciding to date someone of another faith, someone with no faith or someone who does not have any definitive beliefs, the first question to answer is: “What is the purpose of dating?” In our opinion, the purpose of dating is to find a spouse. Dating is a process where two people begin to mesh their lives together by sharing experiences and conversations, then move through stages of commitment that can ultimately culminate in marriage. The main problem with dating someone of another faith or no faith, is that differing beliefs can cause discord in the relationship. There can be respect for your diverging opinions, but faith is something that affects too many aspects of life (or at least it should) for it to just be a casual "agree to disagree" issue.

Think about some of the issues that a dating relationship between people of different faiths would create:

– Should we have sex or not?

– Should we live together?

– Should we go to church, or temple or to the mosque together? Do we go separately?

– Where should we get married and whom should marry us?

What about two people who are casually dating? Does faith need to be an issue then? The focus in casual dating wouldn’t be on anything long term or deeply committed, but more about dating numerous people at a shallow level. If this is where you are with dating, we would suggest that you be cautious about whom you date. Casual dating does provide opportunities to learn about relationships and interactions as well as providing a context for witnessing and sharing Christ. But, at the same time, the natural progression of dating often leads to deeper feelings. If you don’t want to find yourself in a relationship with a person of another faith, then it would be wiser to date people who have the same religious views even at the casual level.

This leads to the topic of “missionary dating.” According to Wikipedia, missionary dating is “when a person of one religion dates a person with differing beliefs for the purpose of changing that person’s beliefs or religion.” No one would argue that as Christian we shouldn’t be spreading God’s Word, but is missionary dating really what God had in mind?

What I Wish I Knew About My Body in My Twenties

Why would someone consider missionary dating to begin with? Usually it’s because he or she can’t seem to find another Christian who wants to marry them and so they get a bit desperate. On his blog, The Urban Pastor, Richard Perkins explains it this way: “[A Christian will] take on an unbelieving boyfriend [or girlfriend] in the hope that [he or she] respond to the Gospel and become an eligible option for marriage. Most people know at least one person who did this for whom it all worked out brilliantly. Some even married and the [person] was converted. Praise the Lord … But no one really talks about the marriages that began to resemble car crashes.”

Many people (but not all) who enter into a missionary dating type of relationship have made marriage an idol. Marriage becomes something so important and necessary in their lives that they ignore God’s warning about being yoked with someone of an opposite faith. If you find yourself considering missionary dating, you should be asking yourself some serious questions.

Why do you have to date the person in order to share your faith with them? What’s wrong with being friends and sharing your faith? Is marriage more important to you than God? Do you feel you need marriage to validate who you are? Do you truly place your trust in God or are you trying to take things into your own hands because you’re 35 and the clock is starting to tick?

These are hard questions to deal with. We all face things in our lives that don’t work according to plan. Missionary dating, dating someone of another faith, marrying someone of another faith … these things all come about because trusting God is extremely difficult when life becomes less than we expected, when frustration sets in because things aren’t happening the way we think they are supposed to.

God makes it pretty clear Christians aren’t to yoke themselves with non-Christians in marriage, but disappointment, loneliness and heartbreak can make even the strongest Christian question if God’s rules are really hard and fast. We all need to remind ourselves that God has our best interests at heart. He wants us to have good lives. Even though Melissa and I are leery of saying there are any sort of definitive rules about how to date, we agree that when God does give a clear direction, it’s best to follow His guidelines. Prayer, wisdom and following biblical principles should be factors in discerning whether to start any kind of dating relationship and be a consistent part of your relationship as it progresses. Even though following and trusting God can be difficult, it results in the most rewarding relationships and lives that are constantly redeemed and renewed.

Jake and Melissa Kircher write about marriage and relationships at:  www.holymessofmarriage.com.

Is it Okay for Christians to Do Yoga?