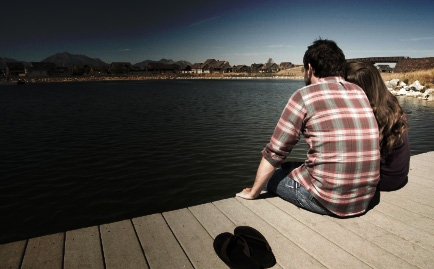 I remember holding her hand for the first time. It was small and soft. She had the most feminine hands of any girl I’d ever met. We were at the movies, and while I can’t tell you what movie we saw (it was 13 years ago), I can tell you that I knew that my life would never be the same. I was a sophomore and she was a freshman in college. Somehow, in a few short weeks of dating, this milky-skinned redhead captured my heart.

I had dated a number of girls in high school and college, and none of them were anything I considered future "soul mate" material. Only Nicole Neves fit this description. Every time I stared into her deep brown eyes she captivated me with her innocence and tenderness. Not only was she strikingly beautiful, she was extremely intelligent. She was in the honors program, and although we both started out as journalism majors, her true passion was humanity: understanding and helping the hurting, poor and needy. I remember talking for hours upon hours about sociology, psychology, humanity, politics, poetry and anything else that crossed our minds. She was a deep person—someone I could talk to on multiple levels. I found myself consumed with thoughts of her at all hours of the day and night. I was in love. Not the small, crush-like puppy love, but a heavy, consuming breathtaking kind. This was passion in its truest form.

Shortly before our first date, I fell in love with another person that became a passion of mine. Although I grew up a Christian, I had lived for myself for the previous decade, and finally re-dedicated my life to Jesus Christ at the tender age of 19. Some amazing things happened in my life through Christ that I knew I had to live for Him.

When I first started dating Nicole, she was not a Christian. This became dilemma number one. I was so in love with her; however, I wanted to please my God. I gave the Lord an ultimatum: Jesus, I really feel that Nicole is the girl for me. I would consider marrying her, but I only want to be with a Christian who knows you. I’m giving it two weeks—if she’s the girl for me, let her give her life to you in that time. Otherwise I’m breaking up. Although that prayer seemed gutsy, I was begging God for her salvation because I didn’t want to lose Nicole. Not only was she my girlfriend, she was my best friend. I truly believe that when you pray with faith, that God will prove Himself faithful. Just shy of two weeks, without my prompting and without me ever telling Nicole of my sincere-possibly-heartbreaking prayer, Nicole called me to tell me that she gave her heart to Jesus.

God’s faithfulness in this showed me that He was presiding over this relationship. I decided at that point that Nicole was my future wife. One afternoon we went to a jewelry store and were just "looking" at rings. The next day I put money down on the biggest one she looked at, got a third job, and worked hard for the next four months to pay it off and finally propose.

Our proposal was something out of a fairy tale book. We were on a horse and carriage ride in downtown Orlando when I pulled out the ring and popped the question. We must’ve been glowing because everyone stared and smiled at us for the rest of the night. That night started what I knew would be the most incredible love story any writer could ever write about.

We set the wedding date for 14 months later since we would be paying for the majority of the wedding costs ourselves. This was the main cause for dilemma number two. Being new in the Lord, we weren’t as "wise" as we should have been about certain aspects of our relationship. We knew that God didn’t want us to have premarital sex, but what else? What did the rulebook say? What boundaries should we have?

Nicole still lived with her mom who was a very “free spirited” person. She didn’t mind me spending the night. Human reason began to set in: Well, we’re engaged to be married, we truly love each other, and we know we’ll be together forever, so, what’s the big deal? Before we knew it, we found ourselves in dangerous places and falling into the temptation of premarital sex. For those of you who haven’t been there, it’s all very subtle. At first you find yourselves alone in a romantic mood. Your intentions are pure as you begin kissing and hugging. After a good while, your thoughts and passions are deeper than kisses and hugs. Before you know it, you are lying to yourselves and end up compromising your promises for the moment’s passion.

Suddenly we found our innocent, romantic relationship tainted by sexual temptation, which clouded our vision of the Holy Spirit and His work in our lives. Thank God that after a while we felt the Lord’s conviction and knew that we needed to do something about it. Guilt and shame sank in as we often prayed about it, but the temptation was too great. Prayer alone wasn’t working. We decided to tell a few close friends at church who agreed to pray for us and to keep us accountable. Also, we decided to set up a few boundaries for ourselves.

The best way to avoid sexual temptation is to not put yourself in those tempting situations. For one, Nicole and I began to hang around more people, so we had fewer opportunities to be alone. I also decided to move back home before the wedding. I no longer had an easy empty room available for the “weak” times. We also decided that I would go home by 11:00 p.m. If we were at her house, as it was almost like clockwork: 11:01 p.m. and we found ourselves so tired that our boundaries had lowered and falling to temptation was at an all-time high.

Things were getting better, but the fact is, we had still screwed up. Then, one day I heard a sermon that changed our relationship and our lives. This pastor talked about second-time virginity. He said that if you lost your virginity, you could pray to the Lord to restore it, stay pure and that God would honor that prayer. I didn’t know if he meant that God would restore it physically, or if he was just talking symbolically, but either way, I wanted that. We wanted that.

We prayed together and asked the Lord to forgive us and then to restore us. It was amazing. We could feel God’s presence on us as we prayed. We felt the heaviness of guilt and shame crumble off of us. It was a new day filled with new promises. We had a number of months to go before the big day, but knew that the Holy Spirit was with us. We kept to our promises.

The wedding was also something out of a fairy tale book. Nicole wore a Victorian white dress adorned with beautiful white beads. She was a princess and her prince found himself crying at the altar as she approached. God was present. This was a marriage ordained and blessed by Him.

When a person loses their virginity, things happen to his/her body that never happens again. That night we found out that yes, God can restore a person’s virginity. Have faith, pray and believe. If you’ve given yourself away to anything but God’s best (marriage), then I want to encourage you: It’s not too late. God is in the restoration and healing business. He loves giving people a fresh start. It’s time for yours.

Oh, and, one more suggestion: Don’t wait 14 months to get married. Make your wedding day happen as soon as you can.

Honest Worship with The Glorious Unseen