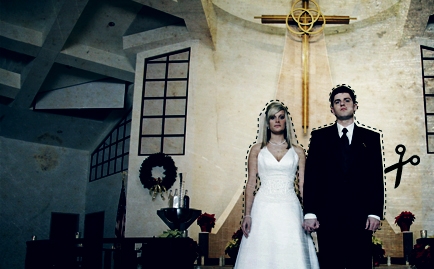 It is wedding season, and by the time this summer is out I will have attended six weddings. They are all of couples that have recently graduated from college and simply cannot wait to settle down with their significant other. Discussions of floral arrangements and caterers fill the air and love reigns supreme in this happy scenario where marriage is the promised land of milk and honey.

Statistically, two of those six couples will end up divorced. Most of us are familiar with the data that was first published in 2001 and then reconfirmed in 2008: 33 percent of born again Christians have gone through a divorce, a number identical to the national average for all adults. It is one thing to hear statistics, however, and another to sit through a wedding ceremony and wonder if this is the couple that will not make it. Having been married barely a year myself, this question is all the more pressing. How can we as young Christian couples guard ourselves against this deeply pervasive problem?

The Catholic and Anglican Church traditions give us an answer that may not be palatable to all, but is marvelous in its profundity. It takes matrimony out of the realm of romantic love and places it squarely in the realm of the sacred. According to these traditions, marriage, like baptism and communion, is a sacrament.

It is surprisingly radical amongst evangelical Christians to believe in marriage as a sacrament, but in a world where the process of divorce is almost as common as the institution it denies, such a view can be our saving grace. Marriage cannot merely be a legal binding of two entities. It is not a secular celebration of love and expensive parties in which you get to show off your good taste. Marriage is no mere human union, but a sacrament that God uses for the sanctification and multiplication of his people.

But what exactly does it mean to say that you and your spouse are embodying a sacrament? The Book of Common Prayer defines a sacrament as an “outward and visible sign of inward and spiritual grace.” So if you understand your marriage as sacramental, it means you and your spouse are both ministers of a sacred bond. Rather than looking at each other simply as companions or lovers, spouses can see that each has been given a special grace from God to love and complete the other in a way no one else can. The ultimate goal of marriage, then, is not happiness but holiness, as husband and wife spur one another along in mutual joy toward Christ-likeness.

In the very beginning of the Bible we are told an almost mystical story of Eve being created specifically for Adam, and God blessing their union. Such an institution is by no means ordinary, and Jesus confirmed this at the wedding at Cana in John 2:1-11 (the miracle where He turns water into wine).

Pope John Paul II, in a talk he gave on marriage, put this miracle in a beautiful light. He called the new wine a “symbol of new love,” and pointed out that in giving the couple this symbol, he was showing them that Christ will always provide for a marriage when love is in danger of running out. This first miracle that revealed Christ’s power “is a sign of the importance marriage has in God’s saving plan and the formation of the Church.” From the very beginning God created marriage to be a sacramental foundation to society that must be valued and protected. Indeed, its very power to heal and be a positive force in the world is what makes its breaking deeply tragic, and this gives us a greater burden to protect it as a sacrament.

Dr. Dharius Daniels on Dating and Breaking Up Well

More than a natural union

This means that marriage is both natural and supernatural. It is natural in that it is a uniting of two people that is meant to be lifelong and exclusive. This is the way most of society understands matrimony, and in the first flush of love and excitement can feel like enough to support a marriage. However, as Christians we are told that marriage is also supernatural—that when two believers say their vows to one another in front of God and His people, they are creating an entity that exists beyond the bride and groom individually. This supernatural aspect is what makes Christian marriage truly powerful. When we are responsible not only to each other and our children but also to the Living God, the words “I do” take on a whole new significance.

Ultimately, the uniting of man and wife is a living image of Christ’s love for His bride, the Church. Just as Christ’s love is full of forgiveness and redemption for his errant Bride, so should Christians understand their relationships to their sinful spouses. Once entered into, matrimony is a vocation, not an arbitrary choice that can be casually walked away from. Failure and disappointment are inevitably going to be part of two humans interacting on a regular basis, but because the bond of marriage is covered in the gift of grace, these very hurdles can become the means for a couple to grow closer together.

I will be praying for all of the couples I see get married this summer, even as my husband and I pray for God’s protection over our relationship. Lord willing, none of us will become part of a divorce statistic. Instead, I pray that we will all grow in closeness to our spouses and to the Lord as we live out our sacramental bonds. Once the wedding day is past and the initial blush of love is gone, we can rest assured that we are part of something greater than ourselves that will ultimately mold us into the image of our loving groom, Jesus Christ.

From Strangers to Community

TOMS and charity: water Team Up