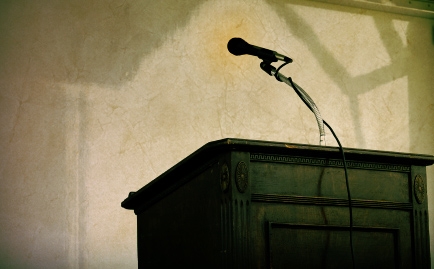 Most people have never heard of Mary Schmich. Schmich is an accomplished columnist for the Chicago Tribune and is best known for a single column she wrote in June 1997. It centered around one critical piece of advice: wear sunscreen.

Sound familiar? It should. In 1998 Australian film director Baz Luhrmann set Schmich’s column to music and released a music single, “Everybody’s Free (to Wear Sunscreen)” that went on to top the charts. The song’s success depends on Schmich’s conversational style. Rather than delivering a complex logical treatise on the nature of “the good life,” Schmich dispatches a few actionable rules of thumb. They are not systematic, exhaustive, or properly categorized, but they are helpful nonetheless.

Similarly, there are a number of “rules of rhetoric” used by Jesus that defy categorization that illuminate more fully the character of Christ’s communication and can have an enormous impact on the ways in which you communicate with others—particularly when you’re trying to do things like share your faith.

Remember: each rule of thumb does not apply in every situation. These are, after all, more general rules and not universal truths. But this list contains a decent sampling of actionable aphorisms drawn from the New Testament that can be useful to your everyday communications.

1. Start with Examples Your Audience Will Understand

Occasionally we all have to communicate complex subject matter to people with little interest in or understanding of the concept at hand. Calculus teachers must reach high school students. Financial analysts must reach boards with short attention spans. Christians must reach non-Christians.

No matter what your subject, always start with an example or concept your audience knows, understands, or finds interesting, and connect it to your core message.

Consider Jesus’ predicament: He was attempting to communicate a compelling message about the nature of the human predicament to fishermen, tax collectors, and prostitutes. That is why He used so many parables connecting familiar, concrete subjects to unfamiliar, abstract ones. In Matthew 7 alone He uses three simple, everyday examples (narrow and wide gates, a tree and its fruits, and foolish builders) to illuminate for people like you and me lessons about sin and salvation. The New Testament is crammed with similar examples, and you have seen good speakers do this outside the Bible as well. It’s why they almost always introduce complex topics with humorous or heartwarming examples.

Know your audience, and start with the things they know.

Imagine for a moment what would happen if a concert pianist with no interest in sports was forced to host Monday Night Football by himself at the last minute. The man has no knowledge of football terminology or the rules of the game. It would be a disaster.

When you speak to an audience, to the extent possible, you must speak their language. Jesus mastered this. When facing the Pharisees, He could quote Scripture. When facing the common people, He could speak to their needs and the situations with which they were familiar. Prostitutes and tax collectors liked Jesus because He knew how to talk to them, He knew what they needed and He seemed to care about them.

Any prosecuting attorney can tell you of the importance of eyewitness testimony in criminal proceedings. Similarly, witnesses can be essential to effective communication in a campaign to change hearts and minds.

The New Testament notes the importance of John the Baptist as a precursor to Jesus—witnessing about the coming Savior’s divinity, purity and power—and the crucial part the disciples played in disseminating eyewitness testimony of Jesus’ miracles and resurrection (and not just his philosophy of life). Jesus considers the use of witnesses essential to the construction of an effective message based on narrative and ethos. Wherever possible, elicit testimonies.

In reading the Gospels, two counterintuitive elements of Jesus’ communication leap out of the text. First, for the all-knowing God of the universe, Jesus asked a lot of questions. Second, Jesus used intentional silence at critical moments.

When Christ talked, He was clear and concise. He listened to his audience and chose His topics carefully. One imagines that Jesus could have formulated an intelligent opinion on anything; but He refrained from speaking more than was necessary. For instance, when confronted with a question about the competing claims of God and Caesar on a person’s resources, Jesus simply responded, “Render to Caesar the things that are Caesar’s, and to God the things that are God’s” (Matthew 22:21).

Follow Jesus’ example by knowing when to speak. Don’t overreach. There are a lot of important topics in the world, and it is not necessary that you have something to say about all of them—particularly if speaking on the topic would hurt your credibility or detract from your primary goal. Be clear and concise, and don’t speak just to hear your own voice. Speak to educate, relate, persuade, or entertain. In short: listen to people.

Silence is one of the most powerful forms of communication. Jesus knew both when to speak and when to be silent. He was often silent at critical moments, which increased the impact or urgency of the situation. Throughout the Gospels, we see dramatic moments when Jesus could have spoken eloquently but remained quiet instead. Consider that fateful moment when he was brought before Pilate. Jesus communicated profoundly with His silence. In Pilate’s eyes, Christ was a Jew and a criminal who should be pleading with him for mercy. But Jesus was silent in the face of death, and His sense of authority and control frightened Pilate. It is doubtful that Pilate believed Jesus was the Son of God. But His refusal to respond likely frightened the ruler more than any affirmation or denial could have.

You can use silence to similar effect. It shows that you are in control and gives the person or people a moment to think for themselves and consider how they will respond to your message. Silence can also be used to reinforce the importance of a message. In the heat of a particularly livid debate, with both sides shouting back and forth, a moment of silence can change the direction of the conversation.

These five tips should help you in any conversation you have—even if it’s an uncomfortable talk that threatens to veer into argument at any time. The next time you’re faced with defending your faith, telling someone about God or just discussing something volatile, remember these rules of thumb. You may never record a hit single like "Sunscreen," but you should at least be able to conduct a conversation that doesn’t cause raise voices and blood pressure.

Joe Carter is the online editor of First Things magazine and an adjunct professor of journalism at Patrick Henry College. John Coleman is a former national public speaking champion pursuing a concurrent MBA/MPA at Harvard University. This article is adapted from their book How to Argue Like Jesus (Crossway, 2009).