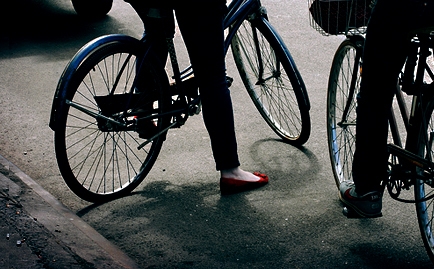 More Clothes Thrown Away in NYC

An old African proverb (famously co-opted by Hillary Clinton) states, “It takes a village to raise a child.”

Some people have decried the idea that a village—a community—would have so much impact in raising a child, as much or more than a family. But in my own life, I’ve seen how both families and “villages” are key to the development of Christians—and not just kids.

When my wife filed for divorce and I was in the midst of deep suffering, my parents were steadfast in their support; they called, visited, encouraged and listened. But I needed more than that. I needed the people who attended my church, my wedding. I needed a village.

Where were these friends and neighbors who witnessed my wedding vows? In a world where people change jobs and cities routinely, these people were scattered around the country. Meanwhile, I sat in my half-empty apartment, staring at white walls, mourning the death of my marriage—a death with no tombstone, a death that would never see a stream of mourners carrying cards or casseroles.

Community is tough to find in our mobile, throwaway society—a world where shopping at Wal-Mart and using Twitter often become substitutes for long-term, more authentic community. Once upon a time, community was more than an emotional or spiritual need; it was a matter of survival. Many hands were needed to plant the crops and harvest them, as well as feed the animals and prepare the food. In an era when calls to 911 or trips to the grocery store were unimaginable, neighbors were the first and last line of defense against life’s inevitable problems. Community was almost unavoidable.

In our high-tech, free-market society we may have gained convenience, but have we lost something in the process? And what does community look like in a world where everything is only a mouse click away? I wanted to find out. These aren’t easy questions. Plus:

1) I don’t like the word "community"—it’s overused, and I’m not even sure what it means anymore.

2) I can’t think of another word for community.

3) There are smarter people than me who have thought about this.

One of those people is Ben Irwin, a 29-year-old editor and seminary graduate who attends Mars Hill Bible Church in Grand Rapids, Mich.—one of America’s most progressive evangelical churches. Ben resembles his church—full of interesting thoughts on theology and life—and as an editorial director for a publishing company, his circle of contacts includes many provocative writers and pastors.

“What is community?” I asked Ben. The question was ironic; when my wife left more than a year and a half ago, Ben became a close confidant, a crucial part of my support system.

“My mind first goes to what it’s not,” Ben said. “I think we’ve thought that community is getting a bunch of strangers together in a small group to share their deepest, darkest secrets rather than a group of people who are on some level experiencing life together.”

“People who are collectively experiencing life together.” I liked his definition and thought that it provided a solid definition for the article.

“It’s funny. I’m pretty outgoing and yet I fear community,” I said. “For example, the people at my church are wonderful, but I still have trouble entering into their lives and letting them into mine.”

“I think it’s hard because it’s so foreign to everything we know,” Ben said. “Our whole worldview is oriented around awareness to self … but there was a time when self wasn’t the starting point. It wasn’t the reality.

“There once wasn’t a sense of an individual apart from the community,” Ben continued. “Look at Paul’s description of the Church as a body—not each person as a body, but each person as a part of the body. When one part rejoices, the whole body rejoices; when one part suffers, the whole body suffers. We don’t know what that’s like. It’s not second nature for us, and it takes more than signing up for a small group to make it second nature.”

I have joined small groups in the past, usually to see them fizzle out or to see my interest—along with my attendance—wane. I’ve started attending a mainline, liturgical church. There, I’ve joined a “Supper Club.” The gatherings involve a dozen people eating dinner in someone’s home. There is no book to work through, no Scripture reading required, nothing. People just talk and eat. It’s as low pressure as you can get, yet I’ve still missed the dinners several times. I’m still hesitant to commit, hesitant to get to know people and include them in my life.

I am the rugged American individualist.

My problem is that I want all the advantages of community and none of the obligations. Community is hard work. To enter into it, I must give up my time and resources. Jesus talked about this, about losing ourselves in order to find ourselves. Some of that happens when we enter into community and begin “doing life” with those around us—whether it’s friends from church, people from other faiths, co-workers or next-door neighbors.

When we do this, we are often forced to check our independence at the door, yet the paradox is that we somehow find it as soon as we rid ourselves of it.

Community is also difficult because we have a tendency to compartmentalize our lives—to think of our “spiritual life” as different from our “regular life,” to think of our “church community” as different from our “neighborhood community.” And when we begin compartmentalizing, we miss the point entirely. We begin thinking that community has an on and off switch, something we choose rather than something to which we are inextricably connected.

“Community is not a ‘value-additive’ to faith,” says Doug Pagitt, pastor of Solomon’s Porch in Minneapolis and the author of Reimagining Spiritual Formation (Zondervan). “We are always in community; the question is what kind.” He notes that asking him about the theology of community (which I did) is like asking him about his theology of air. “It is just what we breathe and what we need to live.”

Pagitt emphasizes the value in long-term engagement built on vulnerable relationships. That’s foreign to those of us used to getting things instantly. Is there a book you want to read? Hop online and have it delivered tomorrow. Want to watch a movie? Try “On Demand” video and watch it this minute. But community is a slow marinade of experiences and personalities that refuses to be cooked on high for two minutes. Relationships take time. My best friend is not someone I met yesterday.

So maybe it does take a village. I’m realizing that community is worth another try. Maybe I’ll try to make it to the next Supper Club. It isn’t the answer, but it might just be a step in the right direction.

Cameron Conant is the author of With or Without You: A Spiritual Journey Through Love and Divorce (RELEVANT Books, 2005). This article originally appeared in RELEVANT.