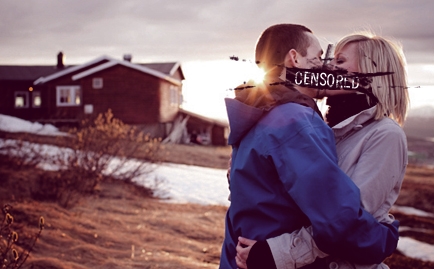 A Stomach Punch from God

The other day, pop princess Katy Perry said something interesting:

“I think when you put sex and spirituality in the same bottle and shake it up, bad things happen.”

Although that specific quote was about Lady Gaga, I think it’s indicative of something much bigger and much worse. Put simply, our culture has divorced God from sex.

I’ve long said that popular culture often acts as if God might have invented humanity and thus sex, but He was completely caught off guard that sex was an enjoyable activity. He was convinced it was a very clinical activity designed for baby-making. But then Prince showed up and told us all that sex was, in fact, awesome. Upon hearing this, God was as shocked as I was the first time I used the Shazam app on my iPhone to  tell me the name of a song I was listening to simply by me holding my phone near the speaker. (I swear, that thing is voodoo.)

That’s what we’ve been told. That God and sex don’t go together. And if you say something enough times, people start to believe it’s true. Even pastor’s kids like Katy Perry will reinforce the barrier between God and sex. You can’t have both in the same bottle. They’re oil and water. Cats and dogs. Spencer and Heidi. They just don’t go together.

So what has our response been to this dynamic, to the idea that God and sex shouldn’t be in the same sentence?

I’d love to say Christianity has knocked it out of the park and ransomed the beauty of this gift from the world, but I’m not sure we have. In fact, I think we’ve caused our own damage in four ways:

1. Sometimes, we teach guilt, not abstinence.

Lots of our churches and youth groups teach kids for years that “sex before marriage is bad.” And I agree with that message. I’ve seen the damages of premarital sex hundreds of times. However, the challenge is that’s only half of the message. I wish when we taught abstinence we would say, “Sex before marriage is bad, but sex when you’re married is awesome.” Because what happens is that during your formative teenage years, you hear over and over again about how bad sex before marriage is. And your head and heart shorthand that idea and just tell you, “Sex is bad.”

Then you get married, and on your wedding night, you’re supposed to magically, instantly shed all your guilt and fear about sex. We’re taught guilt for years and then left on the doorsteps of our marriages to figure it all out by ourselves.

2. We have very few ways to discuss it.

People often send me links to Christian stuff they think is funny. Every now and then, I’ll get links to “Christian sex sites.” The sites are typically forums where Christians talk in an honest and holy way about their sex lives. Now for the majority of us, that last sentence was weird. Let’s be real, our sex lives are not something we collectively talk about a lot in Christian circles. Our finances, our parenting, our jobs, our in-laws, deep regrets from the past—we’ll touch on anything in a small group. But broach some sexual topic at your next small group and people will look at you like you’re crazy. That’s off-limits. It’s supposed to be beautiful and holy and loving. And yes, the world is attacking it every day in thousands of ways, but you’re only supposed to discuss that on your own as a couple. Maybe you’ve had a different experience in small group, but we were in one that didn’t touch on that subject for the first three years or so.

3. We write 10 books about lust for every one book about the gift of sex.

God bless the stuff folks like xxxchurch.com are doing. Buy Breaking Free or the Samson Pirate book. I love both of those. I’m happy for all the work being done to free people from the bondage of sexual addiction. But I wish that for every time I heard about the poison of lust, I heard about the perfection of love. I wish every time someone preached on the problem of sex, someone preached about the untamed awesomeness of sex. The conversation has become very one-sided when it comes to Christians and sex.

Have you ever prayed before sex? Have you ever applied every ounce of God-given creativity you have to it? Have you ever made a Christian songs sex tape? OK, that last one is impossible, Michael W. Smith just doesn’t make music like Sisqo. But seriously, I think to some degree we’ve bought the lie that the world gets to have wild, crazy sex and Christians, holy folks like us, have to have black-and-white, two-dimensional sex. But what if that’s wrong? What if the God who overflows us with love and hope and mercy, wants that part of our lives to be as big and as colorful as two married people could possibly imagine?

Those are the problems, or rather some of them, but what’s the solution? What’s the answer? What’s the fix? Those are fair questions, but there’s no way I could possibly solve the sex situation in a blog post. Here, though, is what I hope.

I hope that every time we say, "Sex before marriage is harmful," we’ll say, “Sex after marriage is neon awesome.” I hope that some well-designed, honest, Christian sex site will launch. (Feel free to use the variation, “Sexy Stuff Christians Like.”) I hope that Thomas Nelson and Zondervan and Baker and some other folks will release some wild books about the goodness of Christian sex.

What are your thoughts on this subject? Are we Christians getting it right or wrong when it comes to sex?

Jonathan Acuff is the author of Stuff Christians Like (the book) and StuffChristiansLike.net (the blog). This article originally appeared on his blog and is used by permission.