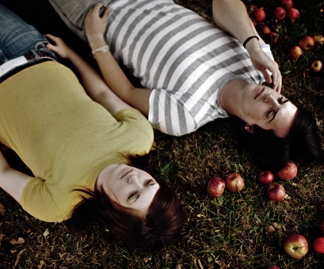 He’s not just a friend. He’s not an old friend you no longer keep in touch with. He’s definitely not the token friend you keep filed away for the times you need to be hip and mention you actually have a gay friend.

No, this friendship is genuine. It’s honest. It’s forever—you made a pact in junior high and 15 years later you’re still keeping it. He’s your best friend, the only friend you lavish with phrases like You mean the world to me and I count my lucky stars to know you. You even told him you would lay down your life for him and actually meant it. And as you both grew older and his list of friends with HIV got longer, you promised in your heart that you would drop everything and take care of him if he ever fell ill.

What is your call, then, as a Christian, as a follower of Christ, as someone who has the grace of the Lord in their life, when your friend is gay? What do you say? What do you do? What does it mean to love them like Jesus would? Can you actually love the sinner and hate the sin? You wonder, gazing into the back of your eyelids at night, if this is even possible within the limits of our human capacity to love.

Jesus, you tell yourself, had no problem. He loved the woman at the well. He was not only seen with her, but He handed her living water, the most precious treasure ever given. And Jesus gave that same water to an indecent woman with a scarlet past.

He hung with sinners and so should you, you say. But spending time, spending honest and vulnerable time with someone, means meeting them where they are, knowing about their life and usually withholding judgment unless that friend asks your opinion.

You remember back to the night you and your best friend were floating around in his sister’s pool. It was a warm night, you were both looking up at the stars and soaking in the beauty around you—the warm air, the sparkling sky and the sanctity of your friendship. Finally your best friend pulls up out of the water and says: "I don’t get you. I shouldn’t question it, but I don’t even understand how we are still friends. I know you have an unwavering faith in God, a faith that’s traditionally in opposition with who I am. I don’t understand it, but I count my lucky stars to still have you. You have no idea how much you mean to me. No idea."

You roll over, stuff your fist in your pillow, and replay the responses you’ve gotten from others. Some twist their eyebrows when they hear you use phrases like "his boyfriend." Some interject, "As long as you’re clear with him that his life is displeasing to God, that’s great you’re able to be friends with him." Displeasing to God, you repeat. Isn’t your life also displeasing to God? Others tell stories of Christian lesbians who got straight and are now married to used-to-be-gay men.

But you’re not so sure your best friend would be better off straight. That’s what keeps you up at night. That’s what you don’t want to admit when your pastor reminds you to keep praying for him. You know your faith is too small. You know your eyes are blinded. You know you’ve settled for just wanting temporary happiness for him now, but have side-swiped a vision of eternity and acceptance for him.

Is this really love?

You’ve told him, throughout the years, that you wish he could stop searching. You wish he knew the peace that you find in Christ. You wish he had this power in his life to be healed, to be made whole. He tells you he does believe, he believes everything you believe, but that he’s not sure what that God really looks like. And he continues searching.

At what point, you ask yourself, has your love gone too far? You are happy for him when he meets someone who brings him joy, who is stable, who makes him shine and smile like you’ve never seen before. You remember how bitter he used to be, the pain of junior high and high school, all the hiding. You thank God he didn’t succeed when he tried to kill himself in college. You thank God the Holy Spirit changed your perspective enough so you had the instant response to wrap your arms around him when he finally did come out, the day he brought a going away present because he thought coming out would mean saying goodbye. You hugged, you cried, you washed his fears of abandonment. You assured him you would always love him.

And now you’re wondering what that love should look like.

Thoughts from the Poets, Prophets and Preachers Conference

A Different Kind of Society: An Interview With Dr. Myles Munroe