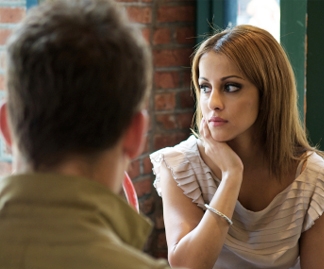 Back in the late ’90s, I
decided God had called me not to date and jumped feet-first into a
church craze that was blazing across the country: I kissed dating
goodbye.

Books, seminars and youth pastors told us that our
generation had fallen away from God, that “casual dating” had become
too commonplace in the Church. Given the option of actually speaking to
a girl, or refusing to date based on my loyalty to spiritualized
groupthink, I went with the latter. The problem? I was the kid who
needed to get pushed, prodded and thrown into the deep end of dating—or at least learn how to talk to women other than my mom!

Looking
back on my decision not to date until I was “ready for marriage,” it is
evident that this course has led me to become a bit of a cripple when
it comes to approaching women. I have invested hundreds, if not
thousands, of dollars in coffee shops around Seattle, thinking that I
might strike up a conversation with a cute girl one day, perhaps land a
date and discover that we have both chosen the same names for our
children. Right …

I just wish I had more to show for the
past 10 years of my failed romantic life than a few quick flings, an
extensive knowledge of the Star Trek universe and the deep brokenness
that weighs heavily upon my heart. While putting the brakes on dating
was good wisdom for some of my more sexed-up peers, I could really have
used a good kick in the pants to throw me into gear.

Often,
I felt split between my spiritual life at church and my social life at
school. I was popular in high school, but I felt like one of the weird
kids because all I heard in youth group was how I failed to match “the
standard” of righteous living. My level of sacrifice was simply not
enough.

So, I did what any other self-righteous kid my age
would have done. I vowed never to drink alcohol—at 15 years old,
mind you—started fasting and praying one day a week, and posted a
sign on top of my family’s television that read: “Would Jesus Be
Watching This?” I threw my life onto an altar of human holiness and hid
my insecurity behind a mask of devotion. Much to my chagrin, I got
nothing in return for this sacrifice except the gift of being a
dating-retarded twentysomething!

Not dating was the perfect
excuse to escape the pressure of asking a girl to a school dance. (I
did, however, enjoy skipping senior prom to see The Matrix with my
cousin Jason!) Simply waiting for “the one” to come along set up a
pattern of lazy pursuit and fortified a natural insecurity that screams
to be worked out during those awkward teenage years. Over the past
several weeks, I have spoken with a number of individuals who embraced
the non-dating lifestyle, and each describes a long struggle with
confidence and self-esteem issues around the opposite sex.

Gloria
Riedesel, a real estate professional in a sleepy Seattle bedroom
community, looks back at her decision not to date. She candidly asserts
the philosophy “was not a holistic solution and did not allow [her] to
embrace the fullness of [her] identity, including sexuality.”

Jennifer
Walker, a Seattle schoolteacher, explained how her decision led her to
dump a high school boyfriend for Lent and commit her first year of
college to dating-abstinence. While her heart was in the right place,
she is now regretful because “that year turned into two years, then
three years, and now 10.”

For me, I did not even allow
myself to think of dating until college. However, I was so used to
blocking thoughts of attraction that I was unable to recognize what my
warm body was screaming. I fell for a cute blond girl; I just didn’t
know it. We talked for several hours each day, jogged together at
night and, with my masterful wooing, she eventually bore my roommate’s
child, married him over the summer and did not return to school in the fall.

About three years ago, I finally went on my first date
with a girl who worked at a coffee shop I frequented. After that
awkwardly sweet evening at the Tacoma Art Museum, I heard from one of
her friends that she was more into “bad boy” types. I guess not calling
to tell her I had a good time was not enough to qualify. Not too long
after that I joined a dating website under the guise of supporting my
lonely cousin. All I managed to do there was offend a good half-dozen
female friends of mine with whom I had zero intention of being matched.

Although I feel like it sometimes, I know that my singular
status does not mean I am damaged goods. I look great on paper—and in
photographs, mind you. I speak French fluently, spent the last five
years working with AIDS orphans and was pursued by the producers of ABC’s The Bachelorette! The problem I have with women is in the interview process.

I
used to think this whole awkwardness I have with dating—the way my
mind goes blank around an attractive girl or how unsure I am at making
the first move—was the result of some stupid, self-righteous decision
I made in high school. But if that were true, I would have to deny the
very core of my masculine existence. When it comes down to it, I am
what my formerly lonely cousin complained about to no end: just another
slow-moving evangelical dude. The thing that makes me feel different is
what makes me a normal man—everybody feels uncomfortable making the
move.

While being another “dumb-dater” is not the most
exciting prospect to face at this point in my life, I take solace in
the fact that this normal, dopey guy will get it right … someday.