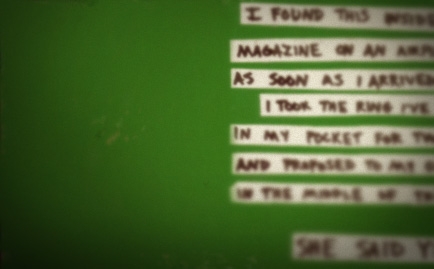 Loving Without an Agenda

Why is PostSecret such a phenomenon? We talk to the founder to find out.

It began as a nice idea for a creative and emotional outlet. But PostSecret has now become a cultural phenomenon, including a booming website, a book series and speaking engagements at colleges and museums. Frank Warren is the man behind PostSecret— which, simply put, is a community art project where people mail their deepest secrets and intimate confessions to Warren. The website has generated over a quarter billion hits and won five
Bloggie awards, while the books have sold over one million copies. The latest collection of postcards, Confessions on Life, Death and God, hit bookshelves on October 6 [browse the book here].

Before becoming the king of the blogosphere, Warren owned a small business for 20 years, a job he describes as “dull and monotonous.” Yet, it was this time that motivated him to find more creative and meaningful work. “Never underestimate the value of a boring job,” Warren jokes, speaking with the same concise intentionality of the postcards he now makes a living from.

So what inspired him to start this snail-mail art experiment? “I’ve always felt like I’ve had this rich interior life that I didn’t always get a chance to share with the real world. I just thought that other people might have funny little jokes they tell themselves, or experiences, feelings, fears, poignant fears, that other people could relate to. I thought if I could create a safe non-judgmental place where they could share these hidden parts of themselves, it could be very special.”

Special indeed. Each week, about 1,000 colorful postmarked confessions make their way to Warren’s mailbox. “I had no idea it would resonate with so many millions of other people,” Warren admits. “I think it’s something that we all share but we sometimes forget about in our everyday lives. I feel like when we can be reminded of those connections it can almost be a spiritual experience.”

Spirituality is a common thread throughout the personalized pages of Confessions on Live, Death and God. Warren explains that it still contains the admissions we’ve come to expect: funny, sexual, shocking, heartbreaking. “But more so than the others, it has these rich, soulful secrets about our relationship with a higher power, about our fears and hopes about the after life, the things we can’t really say at church,” Warren adds.

PostSecret fans know that while some cards can contain such sickeningly sweet messages as love professions and pleas for forgiveness, many declarations can be downright brutal, even violent and pornographic in nature. When applied to religion, this attitude could make readings, well, a bit uncomfortable, and perhaps less than orthodox.

So does Warren see evidence of a negative or hopeful attitude regarding spirituality? “I see both. I feel like this book can be very enlightening about both the selfishness but also the selflessness of our spiritual selves.” Warren says that collecting these secrets has also opened his eyes to the richness of our spiritual interiors. “I just think that we have so many more hopes and fears and thoughts about our spiritual selves that we’re unable to express, and we don’t feel comfortable talking about them. But I think that complexity can be beautiful, even if at times it’s a little self-contradictory.”

What does it say about us—about our communities and churches—if we can’t always open up to another living, breathing person, and yet we can pour our hearts out on 4×6 paper? Herein lies the intrigue of the PostSecret project. As much as we may like to gather around the computer and laugh at some of the Sunday Secrets, satisfying that childish side of us that used to press a curious ear under the door when relatives went in the other room … another part of us recognizes that there is something beautifully, tragically human happening here. Via collective confession, people are expressing their pains and hopes and frustrations in a sort of indirect group therapy, releasing their closeted skeletons to dance, gaining a sense of hope and community, even if in anonymity.

Warren recognizes this human need revealed by PostSecret. “I think there’s an element of voyeurism to it. But I also think there’s something deeper. When you see a secret expressed on a postcard mailed from a stranger who you’ll never meet that perhaps articulates a secret in your own life that you’ve been keeping from yourself- that can almost be a religious experience, when you see that and feel that connection.”

Warren posts secrets of his own in each of his books. This time around, he left two on page 103 of Confessions on Life, Death and God. But don’t get too excited. Warren cleverly places his own confessions in a list of 7 or 8 juicy ones, leaving curious followers to guesswork. And why shouldn’t the man glory in his creation? “I find that process cathartic,” says Warren. “In some ways, maybe that’s one of the reasons I truly started the project, was because I needed to share my own secrets.”

Some have called Warren “the most trusted stranger in America,” and he doesn’t take that title lightly. “I feel very thankful and grateful that so many strangers have trusted me with parts of themselves they’ve never told anyone before. It is a great responsibility, and everyday I try and make decisions that respect that trust and [to] not screw it up because I think it is really precious.” Warren reads and keeps every single postcard, even if not selected for publication. So where do all the secrets go? “That’s my secret,” he laughs. “They’re all in a safe, secure location.”

As one would expect, when you encourage the general population to “get something off their chest”, it can get a little heavy. Warren admits that some secrets stick with him longer than others. One such confession, which he included in Confessions on Life, Death and God, was written by a younger person and says, “Sometimes I wonder if God is real, and if he is then why did he let my dad die? And why does he talk to some people but he never talks to me, even when I talk first.” Even now, Warren says that reading it makes him want to cry.

Future plans for PostSecret include more touring, as well as extending the stories behind the postcards into narratives, possibly even for film. For Warren, it’s all about finding more creative ways to allow people to express themselves, and to remind them that they are not alone. “Sometimes art and healing can be the same,” he says.

The Humility of a Wedding

To Give or To Lend