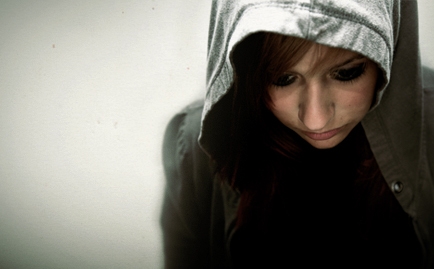 I am no expert on depression. In fact, I often feel uninsightful in conversations surrounding it. Especially since these conversations arise regularly, given that many of my closest friends either suffer from depression to some degree or have within the last five years.

But the topic took on a much different and more personal bent when I started dating my now husband. He’s not on the extreme end of depression—and he’s on medication, which has made his once prominent “down cycles” much more subtle—but for someone who hasn’t experienced depression firsthand, my husband’s condition, and particularly his choice to be on medication, has been a stumbling block for me and a challenge in our love. So often, what the world calls depression, I’ve interpreted as either selfish introspection or an unwillingness or inability to face what’s happening beneath the surface.

Every night my husband takes one and a half little white pills to quicken and regulate the chemicals in his brain. I’ve wondered if it’s really solving anything, or if it’s just quick-fixing or covering up "the real problem." I would guess I’m not alone in having that concern—if you’ve ever loved someone who’s struggled with depression, you may have had the same thoughts.

Since he’s started on meds, I’ve seen my husband’s energy and intentionality return, and he’s been freed to think with clarity, to not be swept out to sea. He describes what medication does as making him “emotionally capable.” He tells me the shadow that used to come over him, that was unrelated to particular circumstances, has abated. He is now open to feel the emotions that appropriately coincide with what’s happening in his life and he’s able to carry them. He’s not plagued with crippling anxiety.

All of this is real. Yet even seeing such vast improvement in him, I have periodically brought up the possibility of my husband going off his medication. I’d start the conversation casually—just a whim in which I’d seem to have no real investment. But as soon as he’d hint at resistance to the idea, I’d push it further, not masking some of the accusation I had: that somewhere in me, I didn’t believe in his depression. I didn’t believe he needed the meds and the doctors. I’d been convinced of the spiritual and psychological nature of his struggle, not the medical.

This was our conflict: my husband would describe to me the torment of his depression and the subsequent clarity he experiences with medication. He longed for me to believe him and to seek further understanding of his condition. I’d listen to him and want to understand, but I’d not be able to shake the threads of doubt that something else—something deeper—needed to be unearthed. He could describe his experience all day long, but sometimes it seemed like nothing could bridge the two places from which we were each coming. He felt alone, and I felt alone.

A quick aside: If you’re in a relationship with someone who suffers depression, I’m sure you’ve at least known some of the conflict, isolation and inner dissonance it can bring. I think the concerns about medication are valid. And those concerns are certainly worth discussing as you purpose to make peace with depression’s place in your relationship.

There is no exact formula for treating depression. Not everyone chooses to help it with medication, and prescriptions vary for those who do. For people whose depression does appear to stem from particular circumstances, medication can still be helpful for clarity in dealing with these issues but is most beneficial in conjunction with therapy.

But making peace—accepting what depression is and seeking greater understanding of it—is crucial for growth and solidarity in your relationship. In my case, finding peace and understanding of my husband required me looking more closely at my own reactions to him.

I began to ask myself Why? Despite the evidence of stability in my husband from his medication, why didn’t I willingly celebrate with him the blessed new normalcy in our lives? Why did I insist on there being some hidden root—something beyond a medically treatable condition? Opening myself prayerfully to these questions revealed much I had not seen before.

I saw that I wanted a deeper explanation for his depression, because if there was a root within my husband that could be dug out and exposed—a root of sin or fear or woundedness—we could untangle it and dissolve it. If there was a root to be unearthed, we could know what was then unknown. With a history of hiddenness in my family growing up, the dread of learning a secret about which I had been clueless felt sickeningly near and always possible. If I steeled myself for excavation, anticipating what I’d find, at least I wouldn’t be ignorant. At least I would feel I was in control. Somehow that seemed less hurtful.

Realizing my own fears at play in my marriage has brought so much healing to me and my husband. Because, of course, there isn’t always an identifiable "root." At least beyond realizing that each of us is broken. None of us brings the same fears into relationships; but whenever there is conflict and distance between two people, it’s always worth opening yourself up to what might be revealed about you that can bring freedom to the one you love.

I can say now that I’m grateful for the anti-depressants my husband takes. I’m no longer afraid that they’re merely a mask. Because I can simply see and accept their benefit to my husband and to our marriage, I can receive them as a gift from God and be thankful for them. Understanding that in this fallen world our minds can be susceptible to sickness, just as our bodies can, actually encourages me to extend more patience and care towards my husband.

If someone you love is struggling through depression, I hope you’ll remember that each of us is broken—just in different ways. And rejoice that God has given us tools to help, whether that be medication, counseling or something else.

As I sat in our Ash Wednesday service last week, I saw on every forehead the imminent withering that marks our earthly existence. The sickness of depression is another mark of that frailty. I also heard of the God who cares for our dust and deigns to save us. In him the frail will be blessed. In him the dark will be light.

Sarah Scherf lives with her husband and puppy in Illinois. She also makes onesies that predominantly feature vegetables and birds.

A Cup of Grace

The Tension of Responsibility