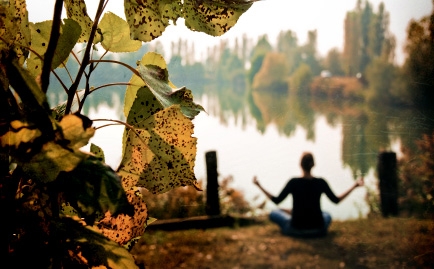 A few months ago, Pastor Mark Driscoll of Mars Hill Church in Seattle was giving a sermon called “Jesus and Demons.” As a part of this sermon, he invited his congregation to text him with specific questions, which he would answer on the spot. One question in particular has since gotten a lot of attention: “Should Christians stay away from yoga because of its demonic roots?”

Driscoll’s response was clear: “Totally.” He went on to point out several common Christian criticisms of yoga and its Hindu background.

His concerns are shared by many careful believers. Yoga’s growing popularity in Western culture has stirred a lot of debate over whether or not Christians should practice it, as well as many misconceptions surrounding the practice. As someone who has been passionately following Christ and doing yoga at the same time, for years, I have become best friends with looks of confusion.

So can Christians safely do yoga? Or is it, like Driscoll argues, simply too dangerous and not worth the risk? Let’s take a closer look at some of the most common criticisms Christians level at yoga.

The term “yoga” (from the Sanskrit word yuj, which means “yoke” or “to unite,” as in uniting the body, mind and spirit) was first used in Hindu texts in the fifth century BC. Yoga originated in Hinduism, and remains a large part of some Hindu practices today.

However, things have changed in the last few thousand years, and most yoga currently practiced in America only slightly resembles the original practice. In fact, most of what we call yoga in the West is not truly yoga at all—it is only asana, the physical postures, and pranayama, the breathing exercises. There are myriad schools of thought in modern yoga and to sum all of them up in a few paragraphs would do them no justice. Hinduism involves yoga; all yoga is not Hinduism.

Lots of things that were once pagan have been co-opted by Christians and used for worship; the most obvious examples being Christmas and Easter.

Christmas traditions of gift-giving, evergreen trees and even mistletoe and holly originated in ancient Babylon during the feast of the Son of Isis, which was held on (drumroll, please!) Dec. 25. Even though most biblical historians believe Jesus was born in September, Pope Julius I declared in A.D. 350 that his birth would be celebrated on Dec. 25—most likely to make it easier for the predominately pagan Romans to convert to Christianity.

To say that Christians can’t take a practice that was intended for something else and use it to worship God is to ignore not only history, but the transformational power of Christ.

Meditation is a dangerous practice.

Is meditation, as Driscoll argued, “opening to demonism”? Or is there a way we can participate that is pleasing to God?

Jesus tells us that when we pray, we should pray in solitude and with few words (Matthew 6:5-8). During His ministry, Christ often withdrew from His disciples for hours to be alone with God (Luke 5:16). He was gone for hours, but praying with few words—He was meditating.

Meditation is referenced throughout Scripture—Jesus did it, David did it and the Lord exhorted Joshua to do it (Joshua 1:8). Meditation is as integral to Christianity as it is to Hinduism, but because of cultural influences Christians have been convinced that the only way to meditate is by sitting still and coaxing yourself into a trance. It’s not! You can meditate on the Word, creation or even gratitude. For a practical guide to Christian meditation, I highly recommend chapter two of Richard Foster’s Celebration of Discipline.

Yoga is about looking inward, when Christians should be looking outward to Jesus.

One of my teachers refers to yoga as “the process of noticing.” At its most basic, yoga is a physical discipline involving stretching, strength training and breathing exercises. By practicing the physical aspects of the discipline, we develop an acute awareness of the natural state of our bodies, increased focus and heightened self-control (Galatians 5:22). If we are more aware of the natural state of our bodies, how much more can we be aware of when the Holy Spirit is moving within us?

Why do we pray? Why do we read Scripture? To be more fully connected to God, of course. If the Holy Spirit is dwelling within us, an inward practice is not selfish or demonic—it’s necessary. For someone with the spiritual gift of discernment, this practice can be extremely valuable in cultivating your ability to recognize truth.

Is it really necessary to be that aware of my body?

Paul says that offering our bodies as a living sacrifice is a spiritual act of worship, and is holy and pleasing to God (Romans 12:1-2). Yoga is a fantastic way to do that! Research has proven that yoga lowers blood pressure, increases musculoskeletal health and circulation, and decreases stress (prison yoga programs have reduced recidivism by as much as 80 percent in their participants). It can be used for insomnia, depression, arthritis, asthma, hypertension and more. It helped eliminate my frequent anxiety attacks, and my roommate is using it to heal a spinal injury.

If we are freed of those distractions and limitations, we are better poised to hear that still, small voice and much more equipped to serve others.

How do I know if a class I sign up for is safe?

We know that discernment is profoundly important in the life of a Christian. In a yoga class, we should be continually evaluating our own intentions and actions—just like we should be doing with everything, every day.

Driscoll claimed that “if you just sign up for a little yoga class, you’re signing up for a little demon class.” But we know Satan has no power over us that we do not give him! If the class is chanting, you can take that time to pray for those around you (though in five years of weekly classes, I’ve encountered chanting in only one of them). Invite Christ into your yoga class just like you invite Him into your home, your relationships and your heart.

If you’re interested in exploring worship through yoga, there are a few things you can do to make sure your practice honors God:

– Look for a class labeled “Hatha,” “Basic” or “Power” yoga. These classes are often focused solely on the physical practice. Most gyms offer this type.

– Bring a friend. Two discerning minds are better than one!

– Buy a DVD, subscribe to a podcast or watch free videos online. If you don’t like it, you can just turn it off.

– Pray about it! You knew that was coming, right?

Driscoll’s concerns are well-founded, and echo many questions I have encountered in my own journey. However, if you practice yoga with discernment and prayer, you can do exactly as Christ commanded the paralytic in the Gospel of Matthew: be healed, take up your mat and go home.