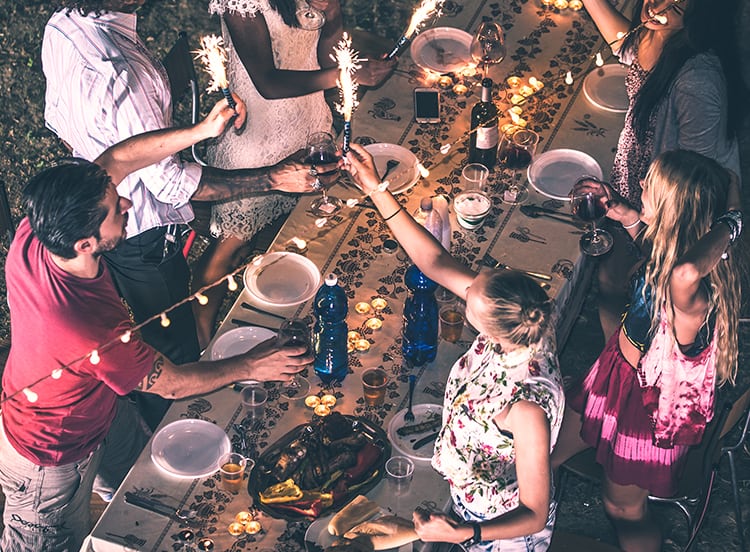 One of the oddest passages in the New Testament is Hebrews 13:2, which charges Christians not to “neglect hospitality since through it, some have shown hospitality to angels without realizing it.” There are undoubtedly many good reasons to be hospitable: to please God, to reflect Jesus’ command to love our neighbors, to make the world better, to increase our own happiness, to inspire reciprocal actions in others, to learn from people different from ourselves and probably others less obvious. But to show hospitality because you might sit across the table from angels? That’s a pretty strange reason.

Before dismissing this text as simply overblown rhetoric, however, perhaps we should understand it a little better. It has something important to say to us today.

To begin, this line obviously refers to a story in the Old Testament, Genesis 18, in which Abraham and Sarah serve dinner to three strangers who have stumbled across their camp while on the road to investigate charges against Sodom and Gomorrah.

The text emphasizes the lengths to which the couple went to make their guests comfortable: “Let a little water be taken, and wash your feet, and relax beneath the tree” (verse 4); “And Abraham hurried toward Sarah’s tent and said, ‘Hurry up three clumps of semolina flour and make some bread.’ Then, Abraham took a plump, good-looking calf and assigned it to a servant who hurried up to prepare it” (verses 6-7).

The elderly couple did not serve their callers tea and cookies, but a multi-course meal that required hours of work. They gave of their time. Any ancient reader would have understood their actions as the appropriate ones for a gracious, hospitality-oriented society.

Since first-century Bible readers thought of the ancient couple as models for faithfulness, it’s no wonder Hebrews could refer to the story without further explanation. Curiously, however, the story in Genesis emphasizes less the generosity of the patriarch and matriarch than the sharp contrast between them and the locals, who offer not hospitality but threatened violence.

The angels, it turns out, can save their host family from a hostile mob only by blinding the entire male population of the city. In contrast to Sodom’s brutality toward visiting foreigners, the hospitality of the old couple creates a social relationship of mutual help, which the angels reciprocate by protecting Abraham’s poor, clueless nephew Lot.

That part of the older story remains in the deep background in Hebrews, but the connection between hospitality and divine protection lies close to the surface. Hebrews 13:2 is part of a larger set of exhortations that conclude the book. Thus in Hebrews 13:1, 3-6 the ancient Christian preacher urged readers to

Let love of siblings continue … Remember those imprisoned as fellow prisoners, those abused as being in the body. Marriage is honorable in every way and sex is undefiled, but God will judge sexually immoral and adulterous people. Don’t have the habit of being a money-lover, but be satisfied with what you have. As Scripture says, “I will never leave you nor abandon you” (Genesis 28:15; Deuteronomy 31:6-8). So we are emboldened to say, “The Lord is my helper. I will not fear. What can a human being do to me?” (Psalm 117:6)

These exhortations swim in the mainstream of Christian moral teaching, also drawing on the Old Testament. The moral life has many parts because it involves many commitments–to other people, especially the vulnerable, to a spouse, to God. All the parts work together like a finely crafted clock, marking the movement of life with clarity.

And all of those commitments, according the preacher of Hebrews, involve the choice between fear and hope. Love of social approval and safety, love of undisciplined sex and love of money all reflect an underlying fearfulness stalking the human heart, preventing us from following our true calling before God.

It’s the same with the neglect of hospitality. In a world of imagined scarcity, love of the stranger seems risky. This predisposition toward negativity is precisely why Hebrews invites its readers to find a model in the immigrants from Ur of the Chaldees, who attended to the needs of other migrants who had traveled further than Abraham or Sarah at first realized.

How precisely does Hebrews make this point? In part, by the choice of words. The Greek word for “hospitality,” philoxenia, means “love of the stranger.” It appears in the New Testament only one other time, in Romans 12:13, where Paul charges his readers to “respond together to the saints’ needs, pursuing philoxenia.”

That is, Christians should aid both those inside their immediate circles and those outside it (whether visiting out-of-town fellow believers or others). The one giving aid should not merely wait for someone to ask for help, but should aggressively seek opportunities to serve.

Also, the noun philoxenos, “one who shows hospitality,” occurs three times in the New Testament. First Timothy 3:2 and Titus 1:8 list a commitment to hospitality as a desired characteristic of church leaders, while 1 Peter 4:9 encourages all Christians to show hospitality to each other. These texts assume that the Church exists at both a local and a worldwide (or at least Roman Empire-wide) level.

Christians who traveled voluntarily or by force (like Paul or Aquila and Priscilla) from one city to another could expect to find a welcoming community wherever they went. The normal barriers of language, food customs or any of the other markers of culture that both unite and divide people would come down before the overriding desire to help.

This early Christian approach to life profoundly shaped how the Church impacted its world. A community that visited prisoners, cared for the sick, housed travelers and otherwise operated out of an assumption of surplus could model what it prayed for, a world of sufficiency, forgiveness and goodness. Without pretending that the early Christians mastered the art of hospitality, we should recognize in their ideals a fitting model for ourselves as well.

What does Hebrew have to say to us today in the 21st century, then? To answer that, we must acknowledge some of the differences between their world and ours. On the one hand, Christians are no longer a tiny, persecuted minority in many countries. In some places, we constitute the majority. Our capacity for hospitality is much greater than theirs, and so our responsibilities are much greater.

The vast economic expansion we have enjoyed may have made hotels and restaurants available to many people, but not to all. Nor do such amenities satisfy the more basic human need for friendship, belonging and empathy.

On the other hand, ours is a world too often driven by xenophobia, fear of the stranger, rather than philoxenia, love of the stranger. Demagogues in many countries exploit that fear by first exaggerating the dangers we face from opponents that are numerous or powerful enough to be plausible but weak enough to be defeated. And then they offer themselves as the only saviors.

Unfortunately, some Christians feast on the poisoned fruit of nativism and extreme nationalism, thus destroying the credibility of the church as a moral signpost for others.

The writer of Hebrews would surely warn us off such pursuits. Ancient Christians would remind us that we are all strangers in a strange land, all travelers needing help, all helpers for others. They would undoubtedly challenge our indifference or even hostility toward refugees, our willingness to turn a blind eye to deportations of undocumented parents of children who are fellow citizens (and who therefore cannot be deported), our acceptance of state cruelty as the price of feeling safe.

They might well charge us, the richest, healthiest, longest-living Christians who have ever walked the earth, with seeing the deficits and shortages of the world rather than the generosity of God. And they would often be right.

The assumption that we have more than enough comes straight out of Hebrews’ core theology. When Hebrews speaks, almost in passing of love for the stranger, it does so immediately after its grand picture of the life of the believer:

You have come to Mount Zion, the city of the living God, the Heavenly Jerusalem, to myriads of angels gathered for worship, yes, to the assembly of the firstborn ones written about in heaven, to the very judgment seat of the God of all, and to the spirits of the perfected righteous ones, and of a new covenant whose mediator is Jesus, to purifying blood of better reputation than that of Abel (Hebrews 12:22-24).

This over-the-top portrayal of the Christian life reminds the frightened, drifting readers of the book that their faith does not rest on their own resources. It does not respond to something ordinary, but to something miraculous. Their faith points them to the real world infusing and transforming the temporary world of material things. In short, Hebrews calls them to think bigger, and when they do they will be unafraid of the stranger, willing to share their lives with them whenever possible.

So, yes, this little line about disguised angels has something to say to us today. In the miraculous world of God, we, too, might meet the disguised angel carrying the wrong passport or speaking the wrong language, whom we will be tempted to ignore because of the political agendas screamed all around us.

Or perhaps we will resist the enticements of racial or religious superiority, the temptations to turn even the noble word “Christian” into a sort of gang label at war with others.

Perhaps we will open our hearts and hands to new possibilities of service. Let us hope.

has taught Old Testament at Abilene Christian University since 2000, where he is the Robert and Kay Onstead Professor of Old Testament. He has written or edited nine books, including recently, Meditations for the Lone Traveler: The Life of Faith in Changing Times (Wipf & Stock). When not writing, teaching, or preaching, Mark is a fan of old baseball stats and new games of the Boston Red Sox.

An Iceberg the Size of Delaware Just Broke Away In Antartica