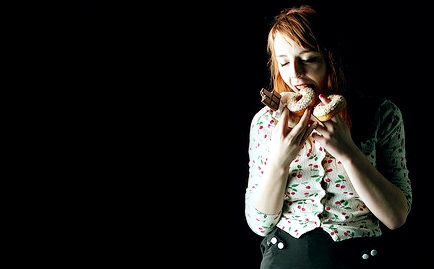 People around the world devote their entire lives to a spiritual doctrine, and major faiths generally suggest their adherents avoid immoderation. Yet based on current consumption trends in developed nations, it appears most people don’t believe eating too much is a crime against anyone or anything.

We have a paradox. Nearly all religions have sanctions against gluttony, still, data indicate that those who claim to observe organized religion are more likely to be overweight than other Americans. If we are truly living a godly life, wouldn’t we be treating our body as a temple and avoiding the burden of body fat?

The modern way of offsetting gluttony is with calorie counting, diet soda, sugarless gum, Olestra, sugar alcohol infused candy, Alli and gyms. These are Band-Aid solutions to the deeper problem of immoderation.

Gluttony is the excessive consumption that deprives another being of a life-giving necessity. Gluttons devour more, leaving others with less. This goes beyond food quantity and includes the consumption of costly foods for the purpose of conspicuous consumption.

Christian philosopher Thomas Aquinas equated gluttons to children, since they are governed by pleasure from appetite and their behavior is ruled by it. Gluttony transcends eating and relates to material goods and other physical pleasures. “-Aholic” is the suffix attached to the glutton’s “meal” of choice.

It’s been said that gluttony is overcome only when someone has a “full soul” and derives pleasure from passions that come from simple pursuits in life. Someone engulfed in the pleasures of gluttony might turn away from spiritual pursuits and weaken their moral defenses (think: alcohol).

Those with excess body fat often carry the burden of gluttony, but weight doesn’t necessarily indicate gluttonous patterns. Just as someone can be angry about the right thing but express it in the wrong way, someone can eat healthy food in a way that is gluttonous.

Gluttony is about excess, and in the U.S., we know excess.

Many wealthier nations not only fail to solve these problems, they fail to even look for them. Does gluttony feed into this ignorance? As an example, let’s analyze our meat consumption.

Americans consume nearly 21,000 animals during their lifetime. It sounds like a lot because it is. Meat is actually an unnecessary component of the human diet and excessive meat consumption can lead to chronic illnesses like cardiovascular disease and cancer. Annual costs for nutrition related diseases in the U.S. exceed $33 billion.

For animals to grow, they need to eat a lot of food. In the U.S., 157 million tons of cereals, legumes and vegetable protein are fed to livestock to produce just 28 million tons of animal protein in the form of meat. The U.S. model of meat production widens the hunger gap between the wealthiest and poorest residents by redirecting land and resources from crops for people to crops for livestock.

What about the impact of excessive meat consumption on planet earth? Farmed animals in the U.S. produce about 87,000 pounds of waste per second. Eating a half-pound hamburger patty for lunch releases as much greenhouse gas into the atmosphere as driving a 3,000-pound car roughly 10 miles. And swapping out the same half-pound burger for a lentil burger each week will save about 2,000 gallons of water.

Gluttony as a sin

Originally, a sin was only deadly if it opposed one’s love of God. For example, if someone merely ate more than necessary, they committed an “excusable” sin. It’s only “deadly” when they’re so taken by the pleasure of eating that it turns them away from spiritual instructions.

As our culture evolved, gluttony went from a sin to a badge of honor. Over-consuming meant we were better off (at least monetarily). We’ve become a society that rejoices in over-consumption, yet denounces those who put on weight, get a DUI or gamble away their life savings.

Gluttony (related to food) is rarely mentioned in the Bible. And you’ll see more about enjoying food rather than warning against excess (after observing the donut spread at a church last Sunday, this doesn’t surprise me).

Still, the New Testament encourages one to be sensible with intake and observe the body as a temple. The concept of willpower actually came from Christian teachings about temptation. Deuteronomy 21:20 ordains that “a glutton and a drunkard” is to be stoned to death by the elders in his city. Yikes.

It’s possible to rely on the gratification of food to compensate for a deficiency of rest, relaxation and happiness in a hassled life.

If you suspect that food/drink is ruling your life in some realm, fasting from the suspected item for a designated amount of time—whether it’s dessert, meat, alcohol, dairy, etc.—can be an excellent self-examination activity.

Ask yourself the following questions:

It’s important to note that self-examination of food habits is different from dieting. Dieting often puts the focus on appearance, which can be self-centered, or on adhering to an externally imposed regime that has nothing to do with psychological wellness. Just like overindulging on food, dieting can also become selfish and weaken spiritual endeavors.

No matter how amazing a food/drink, satisfaction is only temporary, and we’ll be hungry again. Food cannot fill up emotional, intellectual or spiritual emptiness.

At its core, gluttony is about separating ourselves from others (family, friends, God, etc.). And in a modern context, we might say that when something like gluttony governs our life, it can become a destructive habit that undermines our goodness of character, getting worn in over time.

Appetites are linked, and those who might be full of food can still be spiritually empty. Those who are successful at overcoming gluttony make their natural appetite serve them in relationships with others and bettering the world.

It may seem strange to use this antiquated concept in a modern world. Yet the notion of gluttony, and what it implies, is still very relevant in a food-saturated world where people are searching for health and a higher purpose.

Ryan Andrews is a dietitian, strength/conditioning specialist and works with various nonprofit organizations. He currently serves as director of education for Precision Nutrition: www.precisionnutrition.com

Opportunity in the Rubble

The Dangers of Christian Fatalism