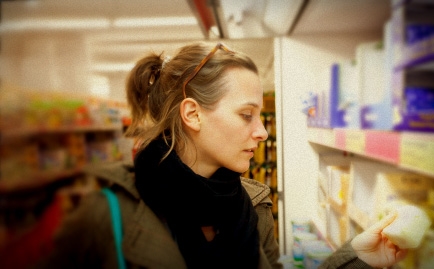 The holidays are a time to drown your problems in gravy, and I say amen to that, but once this magical time has come and passed, you’re left with man boobs or a front butt. You’ve probably already started to pack on the tailgate pounds this fall, and Thanksgiving looms large with all the turkey and stuffing you can manage to contain. And then there’s Christmas. And New Years. And all the days in between when your grandma says “Oh, I baked these just for you.”

But fear not: you too can start now and learn to eat healthy—and better yet, cheaply. You just needed someone as smart as me to tell you how to do it.

Diets are a bad time

Diets are all bad for you—remember that. You always end up missing out on something important like a vitamin or a nutrient … or flavor. It’s not that diets don’t have their plusses, but what they lack is significant.

Even though the whole Atkins fad has passed, it is wise to watch your carb intake if you’re not an active person. There’s a reason that athletes “carb-load,” and there’s a reason most of us aren’t athletes. Carbs can bog you down and keep you from your nutritional goals, and more than anything, carbs are cheap, cheap, cheap. Cereal, chips, potatoes, pasta, bread, etc., are the cheapest foods in the grocery store, they come in the biggest packages, and they’re largely the reason why Americans are so fat.

Before we poisoned the world with McDonald’s, where did the thinnest people in the world live? Asia. Their massive rice (a carb) consumption wasn’t making their rears bigger; it was keeping them lean and strong. Why? Because they embraced balance—combining rice with large amounts of protein and vegetables. Take sushi for example. But while it may just be the world’s perfect food, it’s also some of the most expensive (unless you’ve got mad skills in the kitchen).

There’s also something to be learned from our veggie friends. Adding soy to your diet is a great, inexpensive way to increase your protein intake and avoid high-cholesterol or fatty proteins. Most humans have some level of lactose intolerance, simply because we weren’t built to digest it into our adulthood. Many dairy products are high in fat (and those low in fat are lacking the nutrients you want out of dairy), so finding a way to avoid a diet heavy on Yoo-hoo! is in your best interest.

So now that you’ve heard some food tips, it’s time to start the real work. Look in a mirror, tell yourself how much you love you, and we’ll begin. If there is one thing to get out of this entire article, it is the following: Make a menu!

This is the easiest way to stay on a budget and see what you’re eating. You don’t have to get legalistic with it, but figuring out what you’ll have each night of the week is the first step toward avoiding those desperate dinners where you find yourself dipping Tostitos in peanut butter.

Take each day and figure out what you’ll eat for breakfast, lunch and dinner. You can move menu items around depending on how the day stacks up nutritionally. If you’re going to be working late, make sure you’ve got lots of fruits, veggies and proteins. If you’re going to the gym, start your day with some carbs. Also, you’ll be able to see how balanced your meals are. Make sure you get all the food groups covered, and you’re good to go.

A more advanced technique is making a little extra food for dinner and saving it for lunch (or even breakfast if you can mix it up with eggs). That way you’re not stuck eating a sandwich or going out to eat. Also, it helps on those mornings you rush out the door. Another thing to try is taking your leftovers and reinventing them into a myriad of other dishes. If you bought a whole chicken and roasted it in the oven with potatoes and served broccoli on the side, you could save the extra meat for sandwiches, add the veggies to scrambled eggs, and then take the carcass and turn it into chicken soup that you then store in the freezer. It’s all about being resourceful.

Don’t forget to portion your meals. If you live alone, cooking a pound of pasta only makes sense if you’re going to eat it every night for a week. Learn to make smaller portions, and if you get hungry later, have something healthy like frozen fruit.

Going to the grocery store every day is a good way to waste money. When you shop, make sure you shop for the week (or longer). The receipt may seem expensive, but you’re not spending nearly as much during the in-between times. Buying meat, rice, oil, etc., in bulk is a great way to save money over time. You can freeze individual portions of meat in re-sealable bags. Rice never goes bad, and olive oil is way cheaper by the gallon than by the pint. With your perishable foods (veggies, cheese, etc.), only buy what you can consume in a week. Otherwise, you’ll be tempted to overindulge, or worse yet, you’ll end up with spoiled food.

If you’re really on a budget, use the envelope method. Figure out how much money you can spend on food each week and put it in an envelope. When you run out, you’re done for the month, so plan wisely. The principle it teaches you is how to make the money last and how much is vital to your health and well-being.

No amount of budgeting or nutritional advice is going to save you from becoming a blob. You’ve got to exercise. There are a number of simple ways to increase your activity and not make you hate yourself (or smell). Park further away from the door than you normally do, add push-ups and sit-ups to your pre-shower routine, take a walk after dinner, etc. There are tons of ways to get fit, but just doing more than you typically do is a huge step in getting your body on the right track.

In any case, a simple article is not going to be the definitive guide for eating well on a budget, but hopefully you’ve picked up a few pointers. As my mom says, plan your work and work your plan. It’s trite, but it also makes a lot of sense. If you make a plan, you’re more likely to stick to it, and if you don’t stick to the plan, you’ll be able to tell where you went wrong so you can start over again. But what do I know? I still plan on spending the holidays in elastic-waist pants eating everything my mom cooks up, which includes carbs.

This article originally appeared in the Nov/Dec 2004 issue of RELEVANT.

Is Charity Really a Spiritual Discipline?

Jesus Is Not Political