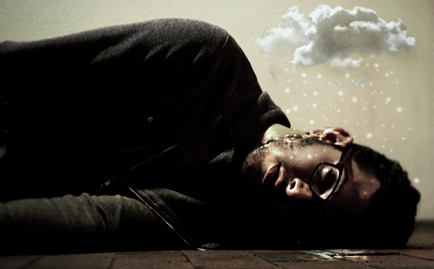 When we were upperclassmen
at college in Chicago, my friends and I would gleefully—and a little
cruelly—observe the freshman class during the winter season. Initially
they were beside themselves, flinging snowballs and sipping hot chocolate
in their cute down vests and fingerless gloves. We would overhear students
from California, Texas and Florida in the dining hall: “Winter here
isn’t as bad as I thought it would be!”

Oh, but they soon learned the
brutal ways of winter, and we were there to watch the transformation
that many of us had experienced. In February we witnessed these same
students trekking across campus in their parkas, braced against the
cold, dark days, and blowing snow. This winter was not the same
friend they had encountered several months before.

Winter can be rough. Sure,
when it first arrives we feel like giddy little children. There’s
a romantic nostalgia associated with winter: snow, the holidays, getting
cozy by the fire. But what of February—when the days are short and dark, the Christmas
cheer has passed and the bitter winter still
drags on?

Some of us feel the effects
of winter more than others, even to the point of sorrow. Take the poet
Robert Burns, for example:

The tempest’s howl, it soothes
my soul,

My griefs it seems
to join;

The leafless trees my fancy
please,

Their fate resembles
mine!

The name for this “winter
melancholy”—or “winter blues”—is Seasonal Affective Disorder
(SAD for short, appropriately enough). However, Burns wouldn’t
have been diagnosed with SAD because like most mood disorders, it’s
been recently accepted and understood by the mental health community.

But is SAD a legitimate disorder,
or is it just an excuse to be a hermit in the winter? It’s an easy
target for ridicule, kind of like Restless Leg Syndrome (which is actually
real, by the way). Doesn’t everyone feel the affects of winter? Depression
just because it’s dark or cold might seem weak to some people. Even
30 Rock has jumped on the bandwagon, referencing SAD in the “Winter
Madness” episode in January.

SAD is for real, though, according
to reputable sources like the Mayo Clinic. It’s defined as a type
of depression that affects a person during the same season each year
(usually winter because of a lack of light in many places around the
world), and like any depression, there are varying degrees of intensity.

So how do you know if you have
Seasonal Affective Disorder? I’m always wary of self-diagnosing because
in the past, I’ve convinced myself I suffer from a slew of diseases
and disorders only by reading symptom lists on WebMD. A sick hobby,
if you will. However, sometimes awareness can trigger truth within us,
open up a reality about ourselves, and put us on the path to a healthier
self.

Most of the symptoms of SAD
are the same as symptoms of other types of depression, but the difference
is when they occur. These symptoms include weight gain, decreased
interest in normal activities, oversleeping and feeling drowsy during
the day, and eating more (especially carbohydrates). Overall, women
are more affected by SAD than men, and it seems to occur mostly in young
adults.

If these symptoms describe
you during the winter months, it doesn’t have to be your norm. As
Christians, it’s hard to admit that we despair, or are undisciplined,
or don’t want to be with people, or just don’t want to do anything.
It’s that whole rejoice-in-the-Lord-always mentality. Trust me, I
get it. Remember the key demographic of young women? That’s me. I’ve
never been diagnosed for SAD, but as a Chicagoan in February, the most
depressing month ever, I’m definitely not immune to the sadness
winter brings … or the excessive carb eating.

While there’s not a cure
for SAD, there are some things that help. Most doctors prescribe light
therapy—sitting in front of a special “light box” for a specific
amount of time each morning. You can even buy these online. Therapy
is often recommended, too, but unless there are other underlying issues,
it is usually not extensive.

If you think you have SAD,
tell someone: a friend, a spouse, a pastor. Seriously. It doesn’t
make you weak. It’s not lame. The whole Jekyll and Hyde nature of
winter is confusing, and our whole selves can be affected by this fickle—and
seemingly never-ending—season.

Sometimes living in a season
of literal darkness and cold is necessary, but if our hearts feel this
chill, we don’t have to despair alone. There is hope in therapy, in community,
and primarily in believing that the light of Christ is able break through
even our deepest sorrow and gloom.

Bonnie McMaken is a musician, foodie, writer, wife and mother. She lives with her husband and baby daughter in Chicago, Ill.