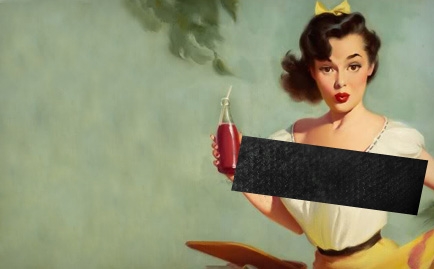 When prominent magazines resort to plastering sexed-up 10-year-olds on their pages to lure readers, we know fashion culture has fallen from high-class to no-class. Yet, that’s what happened when French Vogue featured Thylane Lena-Rose Blondeau striking sultry poses in provocative clothes. Readers winced, and even the historically progressive French turned up their noses.

Now French fashion brand Jours Après Lunes has launched a new line of “loungerie,” a hybrid of lounge clothing and lingerie that a 4-year-old can wear. Jours Après Lunes’s new line not only marks a new standard for fashion but raises the bar in the sexualization of women. Backers of the new sexed-up adolescent line praise it for its cute factor. Critics say the fashion company has stepped over the line.

What does it say about our society when we’re willing to place unwitting children in sexy clothing to sell a pair of underwear?

A new study in this month’s issue of Sexuality and Culture gives us an answer. University of Buffalo researchers compiled more than 1,000 images from 40 years of Rolling Stone magazine, comparing male and female poses, wardrobe and language used in the articles. The study showed that women have been vastly more sexualized than men. The 2000s showed a marked increase in hyper-sexualization of women in the magazine, which is regarded as a pop culture barometer.

“Hyper-sexualization” refers to images that communicate to the reader that the person in the image desires sex. Sociologist Erin Haden said: “We don’t necessarily think it’s problematic for women to be portrayed as ‘sexy.’ But we do think it is problematic when nearly all images of women depict them not simply as ‘sexy women’ but as passive objects for someone else’s sexual pleasure.”

According to Haden the hyper-sexualization of women increases violence against women and girls, sexual harassment and anti-women attitudes among men and boys, not to mention the proliferation of eating disorders and general body dissatisfaction. And one can’t help but shudder at the implications of a society that shuns human trafficking but applauds provocative young “professionals” for profit.

Philosopher Hannah Arendt once wrote that if left unchecked our modern advanced society would annihilate itself if given the chance. In a world bent on consuming information, images, artifacts and, yes, even people, we daily partake in the feeding frenzy of our unchecked society making Arendt’s world of self-annihilation seem normative.

But the hyper-sexualization of women and children crosses the line and should incite the Christian community to reflect on how they contribute to and exist within such a culture.

Theologian J.I. Packer reminds us that sexual laxity does not make a person more human. Rather, it brutalizes an individual. Packer says humankind was designed to run and be satisfied with soulish things. "As rational persons," Packer writes, "we were made to bear God’s moral image—our souls were made to ‘run’ on the practice of worship, law-keeping, truthfulness, honesty, discipline, self-control and service to God and our fellows." When the human person lives contrary to their designed purpose, they dry up—losing the capacity for shame, truthfulness as a person diminishes. The result is not only dehumanization but spiritual death as well.

If we dig beneath the surface we find the incessant drive for sexual fulfillment and even sexual violence stems from despair; that place where death eludes yet hope for life does not exist, where sin makes man his own lawmaker, where meaning dissipates. From this perspective of despair, Nietzsche’s quip "Man is an end" sounds apropos. There is no point and no God, therefore let us do as we see fit.

The Christian community, however, knows that Nietzsche’s terminus ideas of humanity are off. Humankind was created from Love in order to love—moving from glory to glory, touched with eternity. To be a human person means to be in relationship, in constant movement toward communion with one another and God.

We see in the Jours Après Lunes’s "loungerie" subtle lines of despair—a hungering dark. The Christian community stands witness to these casual salvos on God’s image done in the name of fashion and human progress. But what is our response?

Our reticence to live as an alternative society can no longer be tolerated.

As a father of two girls under the age of 5, I am thankful for the work of Erin Haden and her cohort at the University of Buffalo. I do not, however, share her view that portraying women as sexy is not problematic. When we focus on the non-soulish aspects of women and children, we take the first step toward dehumanization. My daughters gain confidence when I show I am trustworthy and proud of them, forgiving, able to laugh and cry, ready to hold them when they’re hurt, willing to tell them stories until sleep comes. They thrive in the ebb and flow of our relationship. They learn personal worth through interaction focused on their souls.

Like you, I’m impassioned when I read another account of someone capitalizing on hyper-sexualization. We’re quick to point a finger at these clothing companies and rightly so. But product lines, to some degree, are based on consumer demands. As advertisers will tell you, sex sells. But for the Christian, it shouldn’t. Perhaps it’s time to stop the blame game and look in the mirror. The only reason sex is selling is because we’re buying.

It’s time to bring a human element back into our over-sexed society and treat females and children with the dignity and respect they deserve. Contrary to popular fashionista thought, 4-year-olds belong on the playground, not in lingerie ads. It’s time to celebrate the image of God, not tear it down—and the Church should be leading this effort.