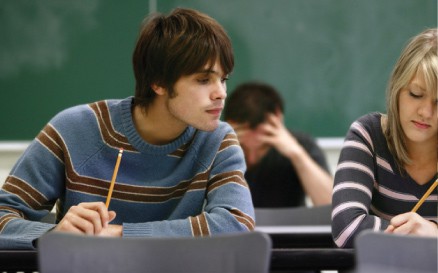 Some people won’t cheat because God says not to—but other people will because they know He’ll forgive them.

A new study called “Mean Gods Make Good People: Different Views of God Predict Cheating Behavior” says there aren’t too many notable ethical differences between believers and non-believers. However, among those who profess faith in the Big Guy, behaviors and attitudes are greatly influenced by how the individual views the object of their belief. For example, if one sees God as an angry judge, they’re less likely to cheat. But if one sees Him as gracious and loving, they’re more likely to bend the rules and bank on forgiveness.

“The take-home message is not whether you believe in God, but what God you believe in,” said Azim Shariff, a University of Oregon psychologist who worked on the study. Research involved experimenting with 100 undergraduates taking a math test. The students were told about a “computer glitch” that would soon show them the correct answers—unless they opted out by pressing the space bar immediately. In addition, students were also given a survey about the details of their personal faith perspectives. In the end, those who associate a deity with compassion were more likely to peek at the correct answers.

While one experiment can hardly define the morality or behavior of all believers, scientific research is becoming an increasingly important component of ethical debate. “It provides a powerful tool to study what is a powerful force in the world,” Shariff said. “It is only now that it has become a really sexy topic.”