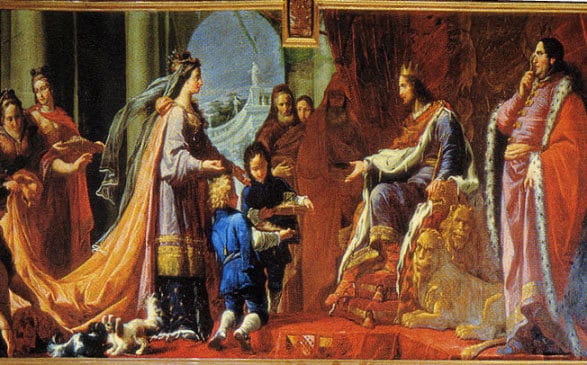 Financially speaking, the Bible covers a lot of ground. From the very poor (Ruth) to the very rich (Queen Esther) to people in between (Simon Peter) to people who shifted their financial status throughout their lives.

But who is the Bible’s richest person? “Doesn’t matter,” you say. “The Bible isn’t a contest of who is richest.” And that’s true, but we’re not trying to win any contests here. This is speculation of a purely academic nature and, if we’re fortunate, we might just pick up some financial wisdom along the way. Let’s look at some contenders.

Wealth was measured in a few ways in biblical times: cattle, land and actual currency like gold and silver. Abraham had all of that in huge numbers, and once even had to split some of his land with his nephew Lot because, as Genesis 13 puts it, “their possessions were so great that they were not able to stay together” (and as Biggie put it, “more money, more problems).

Isaac inherited his father’s wealth and it continued to expand, to the point where the Philistines once politely asked him to move because he’d gotten “too powerful” (Genesis 26:16). Isaac moved, but he couldn’t seem to stop accumulating wealth. As God told him in Genesis 26:24, “I am the God of your father Abraham. Do not be afraid, for I am with you; I will bless you and will increase the number of your descendants for the sake of my servant Abraham.”

This one’s a little complicated because Job is most famous for the relatively brief period of his life in which he had nothing except misery. But that instructive season was bookended by a time during which the Bible calls him “the greatest of all the men of the east.” He held an early record for richest man in the hemisphere—a record he apparently later broke, when God gave Job back double the amount that he’d lost.

Wisdom. Wealth. Solomon truly had it all, including a number of wives that might be charitably described as, uh, “plenty.” 2 Chronicles 9:20 describes Solomon as being so rich that silver literally lost all value. In 1 Kings 10:10, the Queen of Sheba—not exactly impoverished herself—went on a sightseeing tour of Solomon’s lands just to see if the rumors were true. His name is still associated with money today, and at least a few Crusades set out with the express purpose of finding and reclaiming his vast wealth.

One of the Bible’s most famous rags to riches stories, Joseph was a rich kid who was sold by his brothers into slavery. Then he ended up in jail and then, well, he became the second most powerful person in the ancient world’s most powerful country, Egypt. Joseph had a head for economics and used his savvy to prepare Egypt for a drought God had warned Pharaoh about in a dream.

Many of these people lived centuries apart, making it a little difficult to adjust for what we’d today call “inflation.” There are also a few mentions of some people we just don’t have enough details on to make a judgment call (including the otherwise nameless “rich young ruler” in Mark 10). But we can make some educated guesses.

Scholars believe that Job was actually the oldest book in the Bible—written even before Genesis, the “first” chronological book)—so it’s safe to assume that Job was very wealthy relative to the comparatively few people alive at the time.

Second, while people like Abraham and Isaac were very wealthy, they were also very nomadic—meaning there were some necessary limits on just how much wealth they could accumulate, since they were on the constantly on the move.

We know Joseph was very smart with money, but we also know he was second fiddle in Egypt. Second most powerful to an actual king is a pretty big deal, but it’s not quite as big as being the king, and there’s only one of those on our list. “Rich as Solomon” didn’t become a saying for no reason at all, meaning he wins this round.

Unfortunately, he loses most other rounds. Despite being the richest man in the Bible, 1 Kings 11 describes how a bad relationship with his many, many wives led Solomon to stop worshipping God and he was punished by having his country torn apart after his death. It’s a reminder that all the money in the world doesn’t do you much good if you don’t have a solid relationship to help you manage it.

Budgeting is still hard for couples, especially those who approach it from different backgrounds and beliefs. Is it a challenge? Sure, but it can be overcome. Brightpeak Financial has put together a few ideas for how.

How Did the Apostle Paul Make a Living?