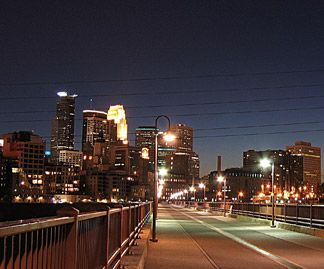 Minneapolis and St. Paul may be divided by the Mississippi River,
but their public parks, artsy culture and urban eats conjoin these Twin
Cities. With major sports teams, a booming college population and a
horde of “world’s largest” facilities, these Twins have plenty to offer
both visitors and locals.

The world’s largest indoor mall, the Mall of America, is located near
the international airport. Convenience is king here—you can catch a $2
shuttle from the airport to the mall while you wait for your layover.
No ordinary shopping complex, the mega-mall holds 520 stores and 50
restaurants, though you’re bound to see a few repeats (several Caribou
Coffees, two American Eagle, three Mall of America gift shops). Within
the complex, Underwater Adventures is the world’s largest underground
aquarium with more than 100 sharks and 4,500 assorted sea creatures. You
won’t be able to miss the mall’s amusement park—a Nickelodeon-themed
roller coaster and log flume ride cut through the shopping hub.

Right across from the Mall of America is IKEA,
specializing in modern, affordable home furnishings. You can spend a
whole winding your way through this store, nearly 6 football fields of
home design and warehouse space. For a history lesson, visit Southdale
Center, the country’s oldest indoor mall. Stock up on your favorite
shoes and clothing; because retail is central to the city’s economy,
there’s no sales tax in the Twin Cities. For a little less of corporate
America, browse the handcrafted jewelry, clothing and more at 10,000
Villages in St. Paul, a shop that sells work from South American,
African and Asian artisans, supporting fair-wages.

When you’re
in the land of 10,000 lakes, a visit to the city’s public parks is a
must. Lake Calhoun and Minehaha Falls and Park provide stunning views,
especially during the state’s picturesque summers. When the weather’s
not so cooperative, city planners have prepared for those bitter-cold
winter winds. University of Minnesota students can get around without
having to trudge through snow, thanks to tunnels and skyways connecting
campus buildings. Worth checking out at the U of M is the Weisman
Museum of Art, a quirky edifice designed by Frank Gehry. What looks
like a typical brick building from one angle is a geometric funhouse of
steel from the other. Not surprisingly, the museum houses modern art,
which you can browse for free.

Icy winters make indoor
attractions a wise move in Minneapolis. Indoor go-carting at Thunder
Alley, ice skating at The Depot and rock-climbing at Vertical Endeavors
are all smart options when it’s too cold outside to do much else.
Otherwise, the city’s affluent sports scene may pique your interest.
The Timberwolves (NBA), Twins (MLB), Wild (NHL) and Vikings (NFL) are
on the roster at particular times of the year. If you’re in for a
different kind of competition, check out ComedySportz, an improv club
with comedians battling a la Whose Line is it Anyway? Located in
Uptown, a trendy, arts district with lots to offer, ComedySportz holds
shows Thursday, Friday and Saturday nights, even offering seasonal
improv classes for aspiring funny guys (and gals).

th alumni from Bob Dylan and Soul Asylum to Sara Groves and someone
else, the Minneapolis music scene still prospers today. Prince got his
start here, and popularized local club First Avenue & 7th Street
Entry with his 1984 film Purple Rain. Today at First Avenue, national
acts like R.E.M. and The Yeah Yeah Yeahs join local musicians onstage.
Minneapolis’s stately Orpheum Theatre hosts acts like The Swell Season,
Flight of the Conchords and Death Cab for Cutie, while the likes of
Alicia Keys, Kanye West and Tom Petty grace the stage at Target Center.
He is Legend, The Afters, John Reuben and Leeland frequent Club 3
Degrees, a sleek and immaculately hip venue for Christian artists. For
a more relaxed feel, Artists’ Quarter is St. Paul’s unassuming stop for
nightly jazz fusion and poetry readings.

Near the U of M campus, Loring Pasta Bar serves elegant entrees over a
romantic ambience, with dancing almost every night under its 3-story
cathedral ceiling. Though upscale, this Italian eatery is
college-friendly and offers guests 30 percent off with a student ID. On
a completely smaller scale, Al’s Breakfast in Dinkytown (yes, that’s a
legit region of the city) is a straight-up greasy spoon that’s popular
for eggs and pancakes. If you can’t find a seat at one of the (very)
few tables, pull up to the griddle-side bar and yak with a local.

A DJ
spins every night at St. Paul’s Wild Onion, a Chicago-style eatery
known for steaks, burgers and other pub fare. A worthy appetizer, the
Sears Tower Onion Rings aren’t to be missed. Just down Grand Avenue is Caffé Latte, a progressive coffee shop serving wood-fired pizzas,
fresh-baked breads, deli sandwiches and sinfully sweet desserts.
Business professionals and the college crowd both appreciate the sleek,
bi-level café with plenty of tables to sip fresh-roasted brews; the
café doubles as an art gallery and wine bar. For international cuisine, Sawatdee is famous around town for its spicy Pad Thai, curries and
other Thai specialties. With multiple locations around the Twin Cities,
Sawatdee is known for its 5-pepper hotness scale (from mild to
volcanic) and distinctly Asian décor.

in Minneapolis is popular among the city’s
college students and families. Pastor and author John Piper serves as
the lead teacher, and the church has three campuses and many services
in order to spread the news of the “supremacy of God in all things.” 3 Degrees Church holds Sunday and Wednesday services at the same venue
Christian bands play every weekend. The community was centered around a
music club from its onset almost 20 years ago. A major ministry of the
church, Club 3 Degrees is meant to be a safe, drug- and alcohol-free
venue for all ages. Formerly called The New Union, the group moved to
their current Warehouse District location in 2003. The Basilica of
Saint Mary is the oldest basilica in North America, marked by an
impressive 200-foot-high dome. Important to the city’s Catholic
history, the church gets involved in the community by hosting Basilica
Block Party, an annual event to help preserve the historic building.
Attended by 30,000 each year, past acts include The Plain White T’s,
Brandi Carlile, Amos Lee and The Fray.

How do you define Church?