There’s nothing wrong with pool parties and barbecues, but why not use this summer to branch out and do something new? Something memorable. Something people will still be talking about three summers from now. Something totally epic.

To help inspire your ambition, we’ve compiled a list of ideas to make this summer the best ever.

Instead of spending your entire summer watching MythBusters marathons, American Ninja Warrior and singing competitions, why not go out and actually live your favorite reality TV show?

It’d be meta. Living in the wilderness with no supplies and eating slugs for nourishment like Bear Grylls is probably a little extreme, but going on an off-the-radar camping trip can make for a memorable weekend. And remember, you don’t need three sarcastic judges for a karaoke night. Go ballroom dancing or try your hand at an open-mic comedy night. This summer is a good time to stop watching “reality” and start living it.

Just imagine, the next time you go to a party, you could be the guy who is amazing at a David Blaine-style close-up magic trick or the girl who can perfectly balance anything and everything on her nose. You may even get caught on camera and become briefly YouTube famous. Live the dream.

Who needs a half-marathon when you can run a race that includes wading through mud bogs, avoiding electrified wires and leaping fire hazards? Adventure races like the Tough Mudder, Reebok’s Spartan Run and the Warrior Dash let racers live every 8-year-old’s dream by running through mud-drenched courses littered with American Gladiator-inspired outdoor obstacles.

If swimming through sludge and avoiding getting shocked isn’t your thing, the 5K Color Run craze (where runners are doused with colorful powder as they blaze their course) is a more-tame, art-inspired outing, but you still get all the perks of showing the Instagram world the race you ran.

If it weren’t for free time and a good idea, do-good companies like TOMS shoes and Warby Parker eyewear, environmentally sustainable businesses like Mast Brothers Chocolate, and a slew of socially conscious fair-trade coffee dealers wouldn’t be around. So this summer, if you’ve got a business idea and enough passion to tap into your inner entrepreneur, you could join some good company.

No longer watch Shark Tank and wonder to yourself, “Why didn’t I think of that?” (You know you’ve done it.) Use the summer to actually pursue that business idea you’ve always wanted to try.

You don’t need to be a full-time missionary to find a cause and start making a difference. Make it your goal this summer to find a way to help others, serve your community or further a cause you believe in. Find a local church to volunteer some time at, give a few hours a week to a soup kitchen or homeless shelter, get involved in local politics or even start your own movement.

Want the ultimate one-up story for your “what I did over my summer vacation” roundtable? Then look no further than the Water Jet Pack. This Rocketeer-like pack straps onto your back and uses a hyper-powered stream of water to fly you 30-feet over your local waterway. Read that sentence again. And with jetpack rentals starting at about $100 and available on both coasts—as if you needed another excuse to road-trip to Florida or Southern California—you’re virtually out of reasons to not fly with a jetpack sometime this summer.

Everyone knows that one dude who brings his acoustic guitar to all the parties in an attempt make ladies swoon. That’s not something we recommend. So instead of being the attention-craving solo act playing unsolicited Dashboard Confessional covers at casual get-togethers, gather some friends this summer and actually start a band. And if you don’t actually play any instruments, and you’d rather make it a one-man show…

Get Creative with Some Song Covers

Because there’s nothing more melodious than “Sweet Caroline” played entirely on Vuvuzelas. Here’s some inspiration:

Instead of just binge-watching shows alone every other weekend of the summer, do something different and host a themed marathon. Invite friends to don their best fancy ’60s suits for a Mad Men marathon. Cook waffles while watching Parks and Rec. Host a Bluth family reunion and watch Arrested Development.

One of the primary components of any epic undertaking is some element of adventure. And there’s nothing more adventurous than eating a raw cobra heart. This summer, follow the lead of TV star and writer Anthony Bourdain and venture out into some new cities, experience some local culture and eat their exotic cuisine.

And we’re not talking about eating roaches in jungles or anything like that. (Although, if you have the opportunity, we won’t try to dissuade you). You can just get in your car and explore the hidden gems, dives and diners on the other side of town—or down the highway a couple hours. The important thing is to eat adventurously—ordering items that you normally wouldn’t and eating meals that you won’t soon forget. 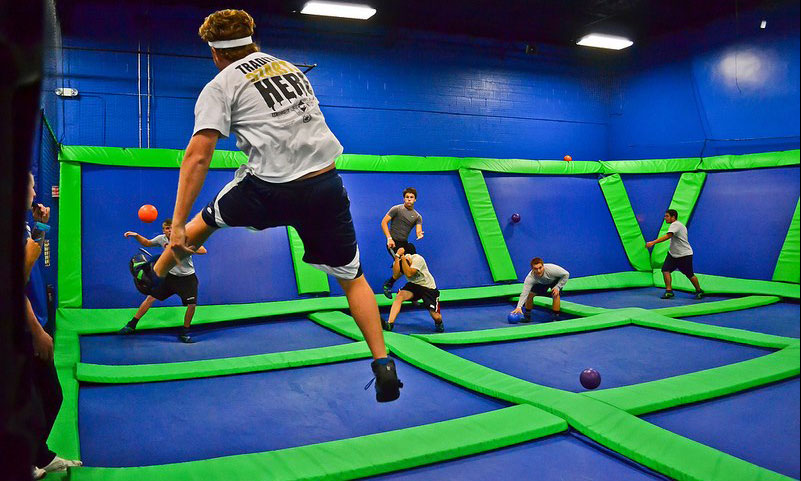 Here are some reasons you should play trampoline dodgeball this summer: First, because there is such a thing as trampoline dodgeball. You literally jump around in cages made entirely of trampolines and throw balls at people. Second, there are now dozens of “Sky Zone” parks across the U.S., making a location easily road trip-able. Third, you can play on six-person teams—the perfect number of people to cram into a van for a memorable road trip. Fourth, what could possibly be a better excuse for a road trip than dodgeball on trampolines?

There is literally nothing more epic than an epic trilogy. So this summer, instead of the typical beach-read fare or young adult adventures, go to the classics. Before he became famous for the Chronicles of Narnia, C.S. Lewis penned the darker and much weirder Space Trilogy. Filled with superhuman aliens, angelic and demonic forces, space travel and nefarious pseudo-government “institutes,” the novels are fast-paced sci-fi adventures with deeper messages about good and evil.

And speaking of Lewis, if you’re looking for something theologically deeper, check out the book Lewis called the “the best popular apologetic I know” that was responsible for “baptizing” his intellect: The Everlasting Man by G.K. Chesterton is the third apologetics book in an unofficial trilogy that also includes Heretics and Orthodoxy. For books about apologetics, they’re surprisingly witty, entertaining and, despite being 100 years old, timely.

If you’re looking for something more modern, check out Cormac McCarthy’s grim Border trilogy (All the Pretty Horses, The Crossing and Cities of the Plain).

Install an Above Ground Pool

What could possible go wrong?

How else are you going to have time to do all the other things on this list?

Regina George’s House from ‘Mean Girls’ On Sale for $14.8 Million