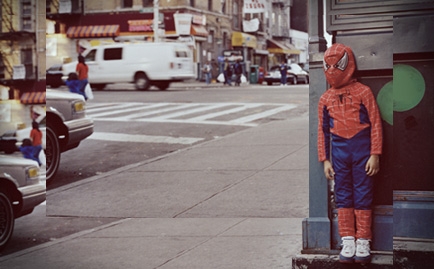 Just because you’re short on time or cash doesn’t mean you can’t have an awesome Halloween costume. Skip the horror movie masks and the barely there “forest animal” outfits at your seasonal superstore, and go for these less obvious and far more hysterical pop culture references. Whether you’re going to a costume party, attending your church’s “Harvest Party” or trying to pass for an appropriately aged trick-or-treater, here are a few cheap costume ideas you might not have thought of:

Netflix
Netflix had a bit of an identity crisis this year, issuing laughable name changes and “false alarm!” press releases faster than they stream movies. It did some serious damage to their subscriber list before they could right their wrongs, but you might as well get one last stab before you reopen your account. Wear a red poster board around your neck with the Neftlix logo. Cross it out and write “Qwikster.” Cross that out shortly after and write “Never mind …”

Ryan Gosling, Street-Fight Version
Everyone else is scrambling to glue scorpion cut-outs onto their silky white jackets to impersonate Ryan Gosling’s soft-spoken, skull-bashing and unnamed character from Drive. But you can be more original than that. Why not impersonate America’s “it boy” at his heroic best—”the guy from the movies” who broke up that street fight in NYC? You’re bound to have a striped tank top, grey sweats, blue ballcap and running shoes somewhere. Ta-da! You’re one “Hey, Girl” away from wooing everyone at your party.

The Guy Who Threw a Hot Dog at Tiger Woods
Drive was also the inspiration for Brandon Kelly, who decided to throw a hotdog at Tiger Woods during the Frys.com Open because the film compelled him to do “something courageous and epic.” His valor deserves an honorable mention this Halloween. Iron-on or write “Tiger Woods = Justice Needed” on a white shirt and carry a hotdog around. Bonus points if you can convince a friend to go as Tiger. Maybe bring a few extra Oscar Mayers, just in case …

Beyonce’s Baby Bump
Beyonce and Jay-Z’s future child has already made headlines, from its VMA announcement to its mysterious disappearing act in interviews. Its next scene is your Halloween get-together. Wear all black from head to toe and shove a beach ball up your shirt. Your grand entrance will likely be met with cheers, tears and excessive tweeting, but just rub your beach ball tummy happily. Then take it out. Then put it back in. Then let out some of the air. Then jiggle around to “Love on Top.” Don’t be upset if everyone doesn’t recognize you, because this time next year you’ll be signing autographs.

Tumblr
Wear a solid color, put a “t” on your chest and get ready to roll all over the place. Somersault, flip and cartwheel to your heart’s content. People won’t really get the point at first, but eventually everyone will be doing it. Reblog!

The 1 Percent
You might be the 99 percent, but for Halloween, put down your protest sign and become the greedy and elusive 1 percent. Wear your finest formal wear, bring as many expensive gadgets and jewelry as you can carry on your person and tote a sack of “money.” Slap on a “Hi, I am the 1 Percent” name badge if you want, though most will know who you are when you don’t share your trick-or-treat loot.

Sad Harry Potter Fan
Even when the last of the Harry Potter books was released in 2007, fans still had the hope of watching (and closely critiquing) the films that would bring it to life. But now that the credits have rolled and the Hogwarts Express has made its last journey, a profound emptiness may pervade your costume hunt. Don your rattiest bathrobe and slippers, carry a box of tissues and clutch your beloved and well-worn copy of Harry Potter and the Deathly Hallows like it’s the last thing in your world that has meaning.

The “Super Bass” Girl
It was a big year for Nicki Minaj. And if you’ve been on the Internet or watched The Ellen DeGeneres Show, you know it was a pretty big year for one of her most passionate fans—8-year-old Sophie Grace. If you don’t have “Super Bass” memorized yet, get on that; you’ll beperforming it multiple times for Halloween. Wear a pink frilly dress,buy some cheap princess accessories and do your best British accent.Adorable shrieking when friends arrive is encouraged.

McRib
Whether you think the McRib is disgusting or delicious, it just keeps coming back. To make the resilient fast food meal your costume, wear a red shirt and just cover it in BBQ sauce. Kidding … maybe. You could also cut out the famous “golden arches” and put them on your shirt, then outline your ribcage with marker or construction paper.

Mark Block
If Herman Cain’s bizarre ad, starring Chief of Staff Mark Block, doesn’t do much for his campaign, it’s about to do wonders for your Halloween party. Put on a suit and ‘stache, take a long drag off a candy cigarette and you’re all ready to take America back (or be America yourself, as the case may be).

What are you dressing up as this Halloween? Share your unique costume ideas below.

The Discipline of Slowing Down