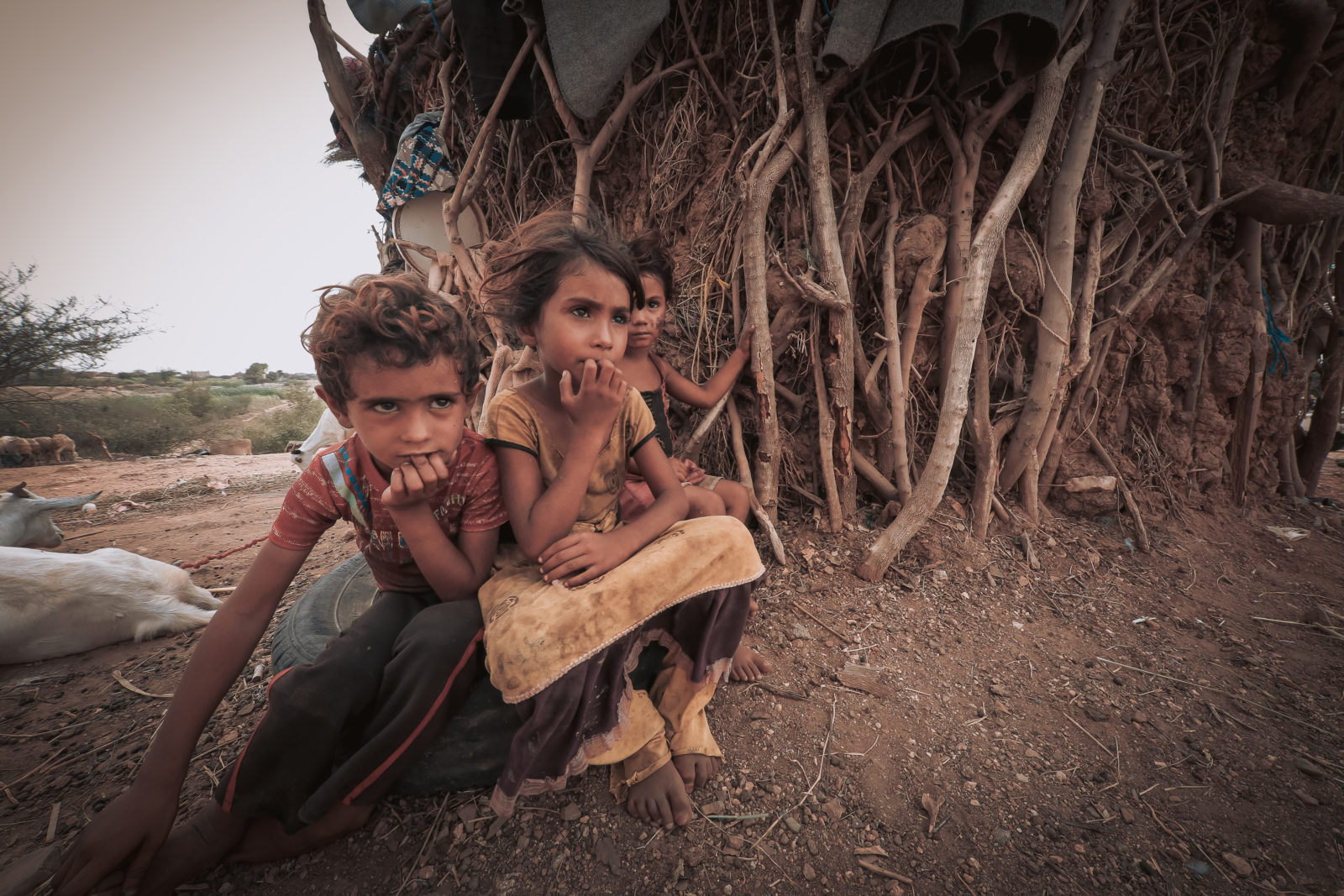 Right now, more than 15 million people in Yemen are on the brink of starvation. More than one million have cholera. At least three million have been forced to flee their homes, and almost 400,000 children are suffering from severe malnutrition.

The U.N. numbers of the situation in Yemen are almost unimaginable. And things there are getting worse—much worse.

“The situation in Yemen is the largest humanitarian crisis of our generation, with 24 million people in need of aid,” Mark C. Smith, World Vision’s senior director for humanitarian emergencies, says. “To put that in perspective, that’s 80% of their population. Imagine over 260 million Americans needing humanitarian aid, that’s what’s going on in Yemen.”

However, even though the U.N. has called the crisis in Yemen the “worst in the world” with a nearly unprecedented need, many Americans remain unaware of the situation, the dire need for aid and what can be done to prevent millions from starving to death, being victims of violence or succumbing to one of the worst cholera outbreaks in recorded history.

This summer, UNICEF Executive Director Henrietta H. Fore tweeted a jarring stat about just how far-reaching the devastating crisis has grown: “Every two hours, one mother and six newborns die in Yemen because of complications during pregnancy or birth,” she wrote. “More than four years of brutal conflict have left essential public services on the brink of total collapse.”

And even though the conflict is threatening tens of millions, the situation has largely gone underreported, as Yemen remains one of the most dangerous places on Earth for journalists.

“I think a lot of people are surprised when you tell them that Yemen is the largest humanitarian crisis in the world,” says Shannon Scribner, Humanitarian Policy Manager at Oxfam America, one of the few organizations that have found ways to operate in the country. “People often think it’s Syria or other countries, but it actually is Yemen. More than two-thirds of the country needs humanitarian assistance right now.”

But before you can fully understand the extent of the crisis, you have to understand how it began.

In the wake of the Arab Spring in 2011, the government of Yemen, like many countries across the Middle East, experienced a social upheaval. Revolutionary movements spread across the region and in 2012, the “Yemeni Uprising” forced the ouster of Ali Abdullah Saleh, a controversial leader who served as the country’s president since 1990.

His vice president, Abdrabbuh Mansur Hadi, took over the office, but in 2015 he fled the country as the Houthis—an Islamic military group—sought a forceful takeover of the capital and government, as Yemenis once again took to the streets to protest how the government was being run.

Since then, forces loyal to the Hadi administration and the Houthis have been waging a civil war against each other, with other factions and tribal groups jockeying for regional power in the vacuum created by mass instability.

Because of Yemen’s location in the heart of the Middle East and the political implications of a Houthi-led country, many of its neighbors—and their neighbors’ allies—have gotten involved in the conflict. Specifically, a coalition of nations including the United States and Canada have assisted Saudi-led bombing campaigns in an effort to stop a government takeover by the Houthis, who are supported by Iran.

But, in addition to airstrikes, the Saudis have come up with another strategy to hurt Houthi forces: a blockade of the country’s primary port of Hodeidah.

Their efforts have prevented some weapons from entering the country and further arming the Houthis, but it’s effectively ceased the flow of food and medicine into the country as well. Now, the area has become ground zero for the civil war.

“Ninety percent of the food that Yemenis eat to survive is imported,” Scribner explains. “And 70% comes through the port of Hodeidah, which continues to be under attack by all parties of the conflict.”

The blockade has led to a severe food shortage in a country where millions have already been displaced by the violence. But because Yemen is surrounded by countries fighting a proxy war within its borders, no one is able to leave.

15+ million people in Yemen are on the brink of starvation. —The U.N.

The little food that is available is often impossible to get as warring factions within the country restrict who can access grain silos and food storage areas. It’s estimated that 85,000 children have starved to death since the conflict began.

“When millions of people arrived in Europe, we suddenly started hearing more about the Syrian crisis,” Scribner says, referencing that civil war. “But in Yemen, people are landlocked. They’re not able to leave.”

The violence, mass displacement and food shortages have plagued the population for years, but recently, the situation has gotten even worse: Yemen is now experiencing the worst cholera outbreak in recorded history.

“This is because the water and sanitation systems have been disrupted by on-the-ground conflicts but also the airstrikes,” Scribner explains. “So you have a lack of sanitation, a lack of clean water, which has really contributed to this cholera epidemic.”

Now, a population of millions is under the constant threat of violence, cholera and famine.

“I think that both sides realize they are not going to win this militarily, so they’re in something of a stalemate right now, but of course the people suffering are the civilians in Yemen,” says Matt Duss, foreign policy advisor for Sen. Bernie Sanders and an expert in the conflict.

But even though the conflict has grown more dire as the outbreak spreads and food continues to run out, there might be reason to have hope for the future of the country.

HOW WE CAN HELP

When Sen. Sanders testified before lawmakers in December 2018 about the need for the United States to help end the violence in Yemen, Duss was seated next to him. Sanders’ plea was simple: He wants the U.S. to end its support of Saudi-led bombing campaigns that are often frighteningly indiscriminate. As Sanders explained to Congress, “In too many cases, our weapons are being used to kill civilians.”

Just months before, the Saudis dropped a bomb on a school bus carrying 40 boys under the age of 15, on a school field trip. The war plane used in the bombing was reportedly sold to the Saudis by the U.S., and the bomb that killed the children was reportedly made by Lockheed Martin—a U.S.- based company.

Duss has been able to do something relatively extraordinary in modern Washington: He’s helped get bipartisan support for a resolution—cosponsored by Sanders, a Democrat, Mike Lee, a Republican, and Chris Murphy, a Democrat—that would prevent the U.S. from further arming the Saudis. Even though three measures to block the arm sales passed their initial votes, President Donald Trump has vetoed each of them.

However, Duss is optimistic that both Democrats and Republicans can work together to end the violence in the country. “I would encourage anyone who wants to help Yemen to contact their member of Congress, their senator, the White House and make clear that they want the United States to stop supporting this war,” he says.

Duss notes that organizations like Oxfam are working to help the people in the country that need financial support, but political pressure to stop the bombing is also essential. “The Saudis are continuing to do this,” he says.

He believes in addition to blocking arms sales, the U.S. can take a more proactive role in supporting a U.N. ceasefire. He says it’s important to make clear to allies that “the United States’ patience is wearing thin” with the violence. It’s essential that finding a peaceful solution be made a priority.

“[The U.S.] can offer its own diplomatic support to what the U.N. is trying to do, to make clear that this is not just a challenge of the United States, not just for the people of the region, but for the international community and that the United Nations has a real role to play here in trying to bring it to an end.”

But in order for that to happen, lawmakers must know this is an issue that voters care about—especially as elections approach. If Americans want peace in Yemen, voters will need to contact their representatives and tell them that ending the worst humanitarian crisis on Earth must be a priority.

“We need a ceasefire across the country,” Scribner says. “And we will need a political solution that includes not just the warring parties, but the people in Yemen—which includes women and youth—people who have not been involved in these discussions to date.”

The tide may already be starting to turn in Yemen, as rumors of a possible U.N.-led truce being struck this fall have been circulating in diplomatic circles. But in the meantime, Yemenis need aid and the support of the people in the United States. The end to one of the worst humanitarian crises in our generation could be on the horizon, and it’s American voters and aid organization-supporters who could help hold the key to peace.

Dear White People (And Everyone Else)