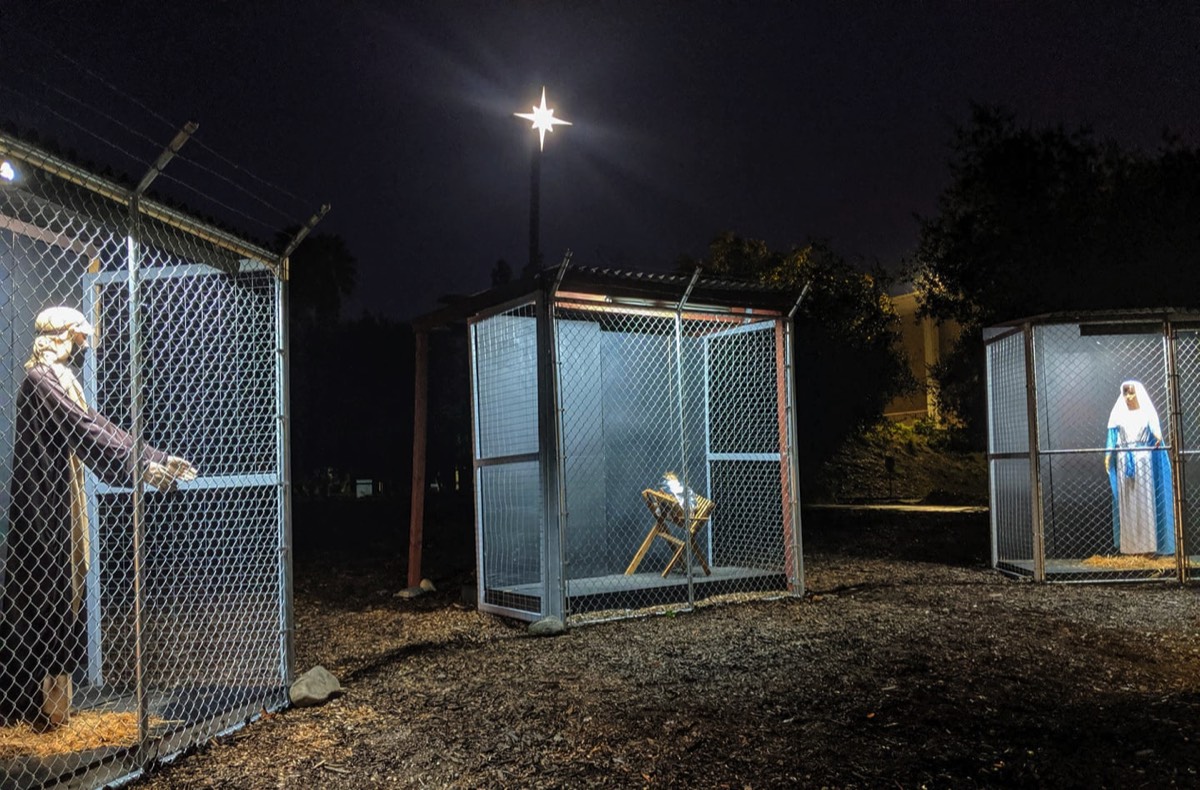 It’s that time of year, when socially conscious Christians remind everyone that Jesus was a refugee. Like last year, when a church in California stirred the pot with their living nativity (above). Or a couple of years ago, when the topic resulted in a Twitter debate between Charlie Kirk and Rep. Alexandria Ocasio-Cortez.

Ocasio-Cortez is a Christian, and she tweeted this on Christmas:

Joy to the World!

Merry Christmas everyone – here’s to a holiday filled with happiness, family, and love for all people. 🌎(Including refugee babies in mangers + their parents.)

The tweet raised flags with people who took issue with Jesus’ alleged refugee status. Among the most high-profile detractors was conservative pundit de jour Charlie Kirk, who noted that Mary and Joseph were “LEGAL citizens.”

I’m really trying to stay away from politics today, but I will not let you misrepresent the Gospel on this holy day

Joseph and Mary were LEGAL citizens under King Herod governed under the Roman Empire – they traveled to Bethlehem as part of a census, a legal counting of people https://t.co/7ug4LQo8T8

So, who’s right and who’s wrong? The answer is not quite that simple.

There is simply no direct comparison between modern immigration laws and the laws of Jesus’ day. Rome had only recently transformed itself from a republic into an empire, and its famed Pax Romana was still settling in. Judea was under the reign of Herod the Great, who was what’s known as a “client king” of Caesar Augustus. Herod had power, but it was not absolute. He could be overruled by Rome, and his jurisdiction had geographical boundaries within the Roman Empire.

The reason Joseph and Mary traveled to Bethlehem was that Caesar was trying to get an empire-wide headcount for tax purposes. So on this point, Kirk is correct that Mary and Joseph were legal citizens of Rome. They were required to be in Bethlehem the night of Jesus’ birth, although they got a famously rotten welcome. (The exact nature of Mary, Joseph and Jesus’ citizenship is a matter of some debate, but it’s unlikely that they were considered “full citizens,” as full legal citizenship was rarely given to people in the provinces and they could not be legally crucified, as Jesus eventually was.)

But the holy family’s alleged claim to refugee status comes not from Bethlehem, but the subsequent flight to Egypt. According to the Bible, the magi (“wisemen,” as they’re popularly known) went to Herod asking about a new king. This tipped Herod off to a challenger to the throne, and he ordered every baby boy in Bethlehem murdered. But Joseph was warned by an angel to get out of dodge, and he fled with Mary and Jesus to lay low in Egypt until Herod’s death a few years later. Egypt was a good hiding spot for the family, connected to Judea via an ancient and well-traveled (i.e., relatively safe) trade route known as “Via Maris” or “the way of the sea.”

The argument for Mary, Joseph and Jesus as “refugees” here is pretty strong. The family was fleeing the violent government of their day and seeking refuge in a new country. The United Nations High Commissioner for Refugees says that a refugee is “someone who has been forced to flee his or her country because of persecution, war, or violence. A refugee has a well-founded fear of persecution for reasons of race, religion, nationality, political opinion or membership in a particular social group.” Jesus would seem to fit that definition.

In fact, according to Father James Martin, “refugee” is in the biblical text itself. In Matthew 2:13, the angel tells Joseph to “Arise, and take the child and his mother, and flee into Egypt….” In the original Greek, that word flee is pheuge. Yep, it’s where we get our modern word “refugee.”

The counter-argument here is that Egypt had been folded into the Roman Empire just a couple decades prior, following the death of Cleopatra VII. So Egypt may have been outside of Herod’s jurisdiction, but it was still co-Roman provinces with Judea. So, as the argument goes, Joseph’s flight was less like fleeing Mexico to the U.S. than it was like fleeing Missouri to Utah.

This is getting a bit pedantic, but it is the major point of contention between those in Ocasio-Cortez’s camp and those in Kirk’s. The relationship between Judea and Egypt was not as complex as the one between the modern U.S. and Mexico, but it was a good deal more complicated than the one between U.S. states. In any case, if authorities have shoot-on-sight orders for you in one U.S. state (as Herod’s soldiers did for the baby Jesus), you don’t get off scot-free by moving to another U.S. state.

So it’s difficult to draw a direct analogy from Mary, Joseph and Jesus’ case to more modern immigration issues. That said, fleeing government persecution for the refuge of a different government is a fairly unambiguous case. There are hairs to split, but you’d have to be pretty stuck on pedantry to argue that Mary, Joseph and Jesus weren’t at least a type of refugee.

Even more straightforward are the Bible’s teachings on how refugees and immigrants are to be treated. As an adult, Jesus told the disciples in Matthew 25:

“The King will reply, ‘Truly I tell you, whatever you did for one of the least of these brothers and sisters of mine, you did for me.’

This was in keeping with Levitical law, which states that “When a foreigner resides among you in your land, do not mistreat them. The foreigner residing among you must be treated as your native-born. Love them as yourself, for you were foreigners in Egypt” (Leviticus 19:33-34).

People can argue the fine points about whether or not Jesus would have been considered a refugee during his ancient flight, but Jesus Himself made it clear that He is manifested in every refugee we see on the news today.

Lysa TerKeurst: Pretending to Be Fine

It’s OK to Live With Questions