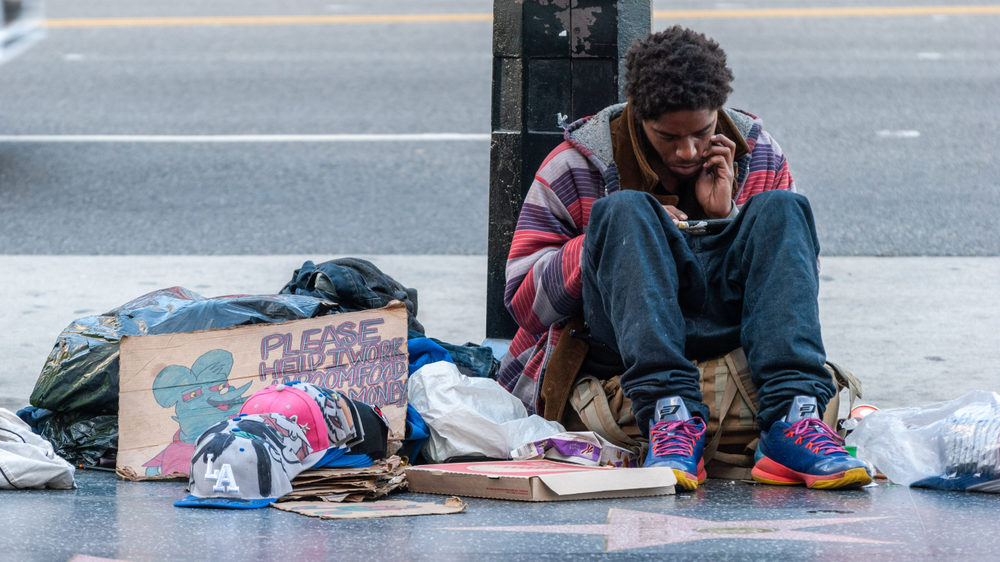 A few months back I was walking through downtown Chicago with my wife. As in every city, people experiencing homelessness were sitting on the sidewalks, asking for change. One man asked me if I could buy him some food. Anytime someone asks me that specific question, I stop. If we’re near a restaurant, I’ll go into the place and buy the person a meal. I asked him his name; surprised, he said Julius.

We had just passed a fried-chicken restaurant, so I said, “Come on, let’s go in here.” I opened the door for him so he could walk in first. As soon as he and I entered, every head in the place turned and looked at us, more specifically, at him. The stares of the people behind the counter were obvious. They looked at one another and then back at him with furrowed brows—looks that made us both uncomfortable.

We approached the counter to order, and I told the woman behind the register, “I’ve got whatever he wants.” Then I turned to him and asked, “So, what do you want?”

Julius picked out some chicken, and I asked him, “You sure that’s all you want?” And he ordered a couple other pieces. The disapproving looks and whispers continued. The woman behind the counter continued to talk to me even though I wasn’t ordering. They were sending a clear message to Julius: you don’t belong here. There’s no space for you here. You’re not valued here. We don’t want you here. In this case, the “here” where Julius didn’t belong was in a fast-food restaurant.

It’s hard for me to not get angry in situations like these. I want to buy all the chicken in the restaurant and invite in every person on the streets. Maybe one day I’ll do that. I’m confused and hurt that we think we have the power to strip someone of the value and right to be in a space. We’re trying to take their dignity.

How can we change our default setting to see equal dignity in each person we pass, whether it’s the homeless man sitting outside in the rain or the woman ordering coffee in line in front of you?

First, we must check our thoughts and become aware of them.

Why should we check our thoughts about the people near us?

Because some of our thoughts have been fashioned from being around people who have displayed actions that we thought were unacceptable. There’s a difference between living out of habit and living out of intent. There’s a difference between living out of what we know is the right thing to do and the sin that keeps us from missing the mark of God. It’s the thoughts we have in the moments we’re around others different from us that we need to challenge. We must identify our learned prejudice and sin, then dare to take steps away from it, especially if this is deep in our hearts.

Second, we must ask why seven times.

Asking why seven times is one of the greatest ways I have found to get at the root of a thought or idea. (It also dismantles the stereotypes we believe, if we are able to answer with an open heart and with no prejudices.) For example:

I think that the homeless man is lazy and doesn’t want to work.

Why do you think that?

Well, because he doesn’t have a job.

Why doesn’t he have a job?

Most likely he has no ID to get a job.

Why doesn’t he have an ID?

His ID was stolen with his bag.

Why was it stolen?

He was in a shelter where everyone was in survival mode, so they stole his stuff.

Why is everyone in survival mode?

They’re in survival mode because they haven’t eaten or slept in days.

Why haven’t the eaten or slept?

They have no one to call for help.

They do not have the same support system or opportunities I have been given.

transforming it into a more understanding and positivethought.

Third, we must replace the negative thought with the full picture and deconstructed view of what might really be going on.

What if we took the same list and replaced our initial responses with some that would put us in a place of service instead of a place of judgment and condemnation?

A basketball coach in his early thirties brought his entire team to our center to serve the local community. People formed a line as they waited to get different types of resources. One man who was waiting in line wasn’t wearing a shirt. Waiting in line to receive food and clothes is not for the proud; for many it can feel like a difficult or shameful place.

The coach saw the man without a shirt and told one of his players to run to the van and grab an extra shirt. The kid ran to the car and the coach took off his shirt and placed it on the homeless man.

We were sitting with that homeless man a while later and he said, “Man, I really appreciate this.” He started to tear up and continued, “Last night I got jumped, and they took my clothes and ripped my shirt off.”

The students with the coach didn’t walk away with an exact formula or the ABCs of showing someone dignity, but they walked away with the idea that affirming someone’s dignity can happen anywhere at any time. You only need to make yourself available.

Sometimes there’s not a set of rules for showing others dignity. It’s an instinctive desire to make the world a better place even if that looks like taking off your shirt and giving it to someone who doesn’t have one. It’s knowing that despite the internal poverty that we may have, God still deems us worthy enough to give us the ultimate gift of Jesus.

Dignity is powerful. That many people have lost their lives without knowing they were worthy and valuable scares me. There are so many people who have yet to hear the words, “I love you,” and “You matter.”

As people who desire to emulate Jesus, we can’t go another day without telling the unseen, unheard and not-valued people that they are loved, seen and valued.

Terence Lester is a minister, speaker, community activist, author, and founder of Love Beyond Walls, a not-for-profit organization focused on poverty awareness and community mobilization. His books include I See You, Getting Past Stuck, Simple Prayers for Hurting People, and Identity Theft and the forthcoming title When We Stand, releasing in May of 2021.