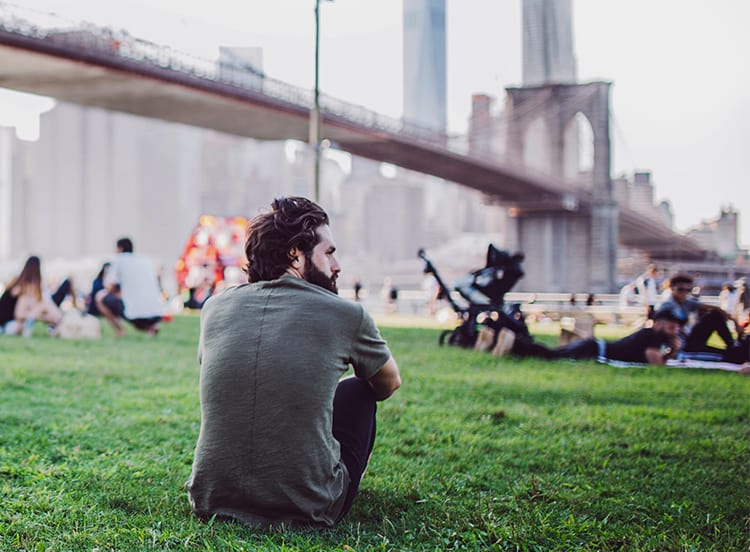 Doubt. It should be a four-letter word because, uttered aloud in some church circles, it often elicits the same response as the F-bomb, sending the masses scurrying for cover. And if it’s not met with downright horror, it can certainly cause people to shy away in extreme discomfort. That’s where I was for years—comfortably uncomfortable with doubt because the path through it seemed a fearsome one, one better left untrodden than to run the risk of never making it back.

Some of us grew up in environments where doubt and hard questions about faith were looked at as the first step in a spiral straight to hell instead of the breeding ground for a deeper relationship with God that it can be. And I think that’s why doubt can be such a confusing experience—it’s unknown, uncharted waters that can stir up fear because there are few guarantees when you set out upon its seas.

But one thing I’ve learned in my own decadelong struggle with doubt—when it’s addressed inside of a relationship with Jesus, there no path too dark, no question too deep and no subject too taboo to delve into. God is not afraid of your questions, and asking them doesn’t disqualify you from having a relationship with Him. In fact, sometimes choosing to embrace sincere questions can actually lead you to a stronger, more grounded faith.

Trying to ignore your doubts won’t make them go away.

As a girl growing up in church and then as a young youth pastor’s wife, I led a fairly sheltered existence where most of my questions about God were small and easily dismissed. Then my family and I moved to India as missionaries, and suddenly my questions and doubts became too loud to ignore. Faced daily with suffering to an extreme I never imagined existed I found myself wondering, Is God really good? Is he even trustworthy? And to top it all off I felt like I was praying into a steel vault and my prayers either never reached God’s ears or His answers never reached mine.

In that environment I quickly reached a point where my doubts couldn’t be brushed aside any longer. Questions I was once able to ignore—that seemed inconsequential or insignificant, now demanded answers with an urgency that frightened me. No longer theoretical or philosophical dilemmas, my doubts morphed into physical realities that needed to be addressed in order to maintain my sanity.

Confronting doubt is like going to Oz to see the wizard. It’s a terrifying proposition until you pull back the curtain and finally see what you’re really dealing with. But once you bring your doubts out into the open, and into God’s presence, you’ll find they’re not nearly as terrifying as they once seemed because at the bottom of every dark hole of doubt that I dove into for answers I found a richer, more complex, more satisfying Savior than I knew before.

In Matthew 28, the Bible records the story of Jesus appearing to the disciples after His resurrection. These were the men who walked with Jesus everyday, saw His miracles with their own eyes and witnessed His resurrection. Verse 17 slips in three little words that whisper hope into all of us who’ve wondered if our doubts discredit us from serving God. It simply says, “but some doubted.” If these men who experienced Jesus’ physical presence on a daily basis still had doubts and reservations, I’d say those of us who doubt today are in good company.

In his very next breath, Matthew says Jesus commissioned them (doubts and all) to go out into the world and tell people what they saw and heard. That was Jesus’ response to doubt. He looked at them and essentially said, “I’ve got a job for you, and I’m going to be with you wherever you go.” He wasn’t intimated or angered by their doubts, and He knew exactly what to offer them in the face of it—purpose and His presence. Two essentials that would help them better navigate the twists and turns of doubt.

Sharing honestly about your faith (including your doubts) helps others.

When I was in my darkest, most hopeless days, drowning in doubt and isolation, a friend told me a story that changed everything.

Jennie Allen: Being Liked is Overrated

She was a veteran missionary with years of experience under her belt, and as the newbie on the block, I looked up to her and assumed she had her faith all figured out and that I was the lone weirdo struggling with my faith. Convinced that she never struggled with God, I assumed she couldn’t possibly relate to my feelings of anger and abandonment. So imagine my surprise when she opened her mouth and proceeded to share her own struggle with doubt and despair as she watched her mother suffer and die from cancer.

I was thunderstruck hearing that someone I admired so much not only understood the emotions I was feeling, but had asked some of the very same questions. Her courage, vulnerability and openness allowed me to move beyond the cage of isolation and loneliness that doubt had locked me in.

Not everyone doubts, but I think it’s far more common than many of us realize and just admitting it out loud helps break down the stereotype that doubt and faith can’t co-exist. Recently, I wrote a book called Holy Doubt, and I loved pairing those two words because they seem like they don’t belong together, but the paradox of the Kingdom of God is often found in two ideas that seem incompatible: die to live, doubt in order to believe. Francis Bacon had this to say about it in 33De Augmentis, “If we begin with certainties, we will end in doubt. But if we begin with doubts and bear them patiently, we may end in certainty.”

Each person’s path is different, and not everyone’s runs through doubt, but if yours does there is nothing to fear. God is strong enough to bear your questions. A God that is diminished or intimidated by questions is not one I’d want to serve anyway. It’s time we stop brushing our questions aside and allow the pursuit of truth to change us—because doubt can be highly transformative.

In yet another paradox, I’ve found that the deeper I question my faith the stronger it becomes and my love, devotion and passion for God grow more. Not less. Because when I finally released the fear of what I might find if I fully explored my doubts, I discovered God was faithful in every question to meet me. I’m not saying He gave me the answer to every question, but He allowed me to wrestle it through with him to an acceptable conclusion. And my faith is stronger today for it.

is a writer based in Northeast Iowa. She is the author of Holy Doubt: Finding Hope When Faith is a Struggle and blogs about living life and faith honestly and authentically at www.droppingtheact.com. You can follow her on twitter @EricaBarthalow.

4 Bible Verses That Are Constantly Used Out of Context