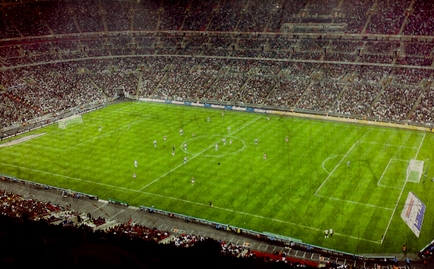 As the World Cup heats up in South Africa, new sporting controversies and legends are sure to grab our attention, as they have in years past. Devotees are sure to remember, for example, the exploits of Argentinean attacker Diego Maradona in the 1986 games. In addition to scoring what is remembered as “the goal of the century” in the quarter-finals match, Maradona had snapped what appeared to be a miraculous header past the outstretched goalkeeper. Dubbed the “Hand of God” goal after the match, Maradona later revealed that it had been a flick of his own hand—concealed by a quick head fake to evade detection—that illegally propelled the goal into the net.

But as we turn to this year’s Cup (starting tomorrow), there is a far more serious form of illegal movement than a footballer’s (or soccer player’s) cunning play that demands our attention: human trafficking, a global phenomenon powered by coercion and deception, which may increase around major sporting events and other times of increased transnational movement.

Whether for forced labour or coerced sex, the global business of human trafficking is booming. In 2005, the International Labour Organization (ILO) estimated that human trafficking had annual profits of $31.6 billion, making it the third-largest grossing sector of organized crime, after drugs and weapons. A crime against humanity, the UN Office on Drugs and Crime defines the act of human trafficking as one of "… recruiting, transporting, transferring, harbouring or receiving a person through a use of force, coercion or other means, for the purpose of exploiting them.”

South Africa, home of the 2010 World Cup, has been documented as a source, transit and destination country for trafficking in men, women and children, according to the U.S. State Department’s 2009 Trafficking in Persons Report. That means people are trafficked from, through and into South Africa, some for labor, while others are forced  into South Africa’s many brothels. While South Africa has taken steps to pass a comprehensive anti-trafficking law, that legislation is caught up in a Parliamentary committee, where many believe it will languish for months—long after the World Cup leaves town.

For a victim of human trafficking, that delay leaves a gaping wound, a jagged legal loophole through which they can be exploited with impunity. Without robust legal tools to fight the lucrative business of human trafficking, prosecutors and police are hampered in their efforts, while traffickers continue to profit and innocent victims suffer.

Shockingly, according to the U.S. State Department, there were only 5,808 prosecutions and 3,160 convictions for human trafficking throughout the world in 2006. Putting that figure in context with global estimates of the crime suggests that for every 800 people trafficked, only one perpetrator is convicted. Without credible deterrence, traffickers see only opportunity for obscene profits, not punishment that would make them think twice about their crimes. International Justice Mission has seen, time and time again, that human trafficking grows stronger where laws against it and enforcement are weakest—but that excellent laws and enforcement can make a significant difference in combating this crime.

With the huge flow of international visitors pouring in through South Africa’s borders for the World Cup, it is possible—some say probable—that a new stream of human trafficking victims could slip past the notice of officials. Of course, when an activity is hidden and illicit, reliable statistics are very hard to come by. Still, reports are emerging of new foreign nationals—including Mozambican, Zambian, Zimbabwean, Chinese and Southeast Asian nationals—working in brothels in residential Cape Town neighborhoods. City Councillor J.P. Smith, an official responsible for safety and security during the World Cup, recently claimed in an ESPN “Outside the Lines” investigative report that “they were not here a year ago. These girls didn’t come here by themselves. … They’re being brought here through syndicates, who have the means to manipulate immigration processes, to bribe border patrol, border guards, to bribe immigration officials.”

Though it may be difficult to say definitively if human trafficking increases during large sporting events like the World Cup, we do know human trafficking already exists at an unconscionable level, and the toll that human trafficking takes on its victims—whatever their number—is staggering.  These global events turn our eyes toward an illegal phenomenon that often escapes our notice. Rather than being preoccupied with whether human trafficking might rise in association with a given major sporting event, we’d be better off to ask the question of whether we can use the occasion to help end its existence. How many victims of human trafficking does it take for it to become “too many”? We should be asking: How might we decrease the supply and drive down demand? How can we protect the vulnerable? Deter the predators? Stop those who traffick in human beings?

Stronger law enforcement has been proven to help. International Justice Mission views it as indispensable. In Cebu, Philippines, after two years of collaborative casework led by IJM, we saw a 70 percent reduction in the victimization of children in the commercial sex trade. This required vigilance by competent local authorities. In IJM’s experience, such partners can be identified and equipped all around the world.

There is a second reason football fans remember the Argentinean team’s performance in the 1986 World Cup: the team employed a risky strategy to position defenders, so that Maradona had greater freedom to go on the offense without fear—to range within striking distance of the goal. I’ll defer to the experts on soccer strategy here, but it stands to reason that if we can position our governments, our communities, our churches and ourselves to defend against human trafficking through world-class awareness, educational, legislative and enforcement efforts, we just might have a shot at winning a game where lives hang in the balance.