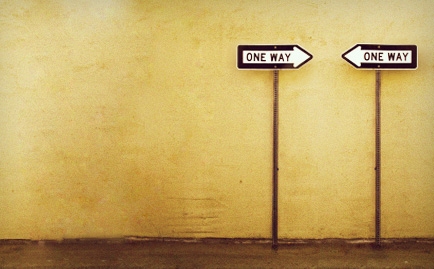 Baby Proves iApocalypse Is At Hand

“The church has been called to counter and bless the culture.” – Recovering Biblical Manhood and Womanhood

"[The church should be] unapologetically countercultural in our teaching of the Scriptures.” – Mark Chanski

We are gridlocked in a stubborn culture war. But I want to address the issue of being "called" to be countercultural. Opposing “the culture of the day” is often something I have heard we should do as Christians. But what does that mean?

Both of the above quotes seem to indicate a lack of understanding regarding the fact that we live among dozens of cultures as Americans. Shall we simultaneously be countercultural to each separate culture? That’s quite difficult since they are often opposed to one another.

It is implied that Christians should be countercultural regardless of what values are upheld by the culture. But acting in that way only encourages pride, stunts the growth of the Church and ignores the Spirit of God at work among all peoples. In fact, the Church can learn a lot from non-Christians—and if non-Christians agree en masse about something, that’s called culture. And sometimes non-Christian culture is right.

Many cultures without the influence of the Church, for instance, are right about the importance of respect for their elders. Other cultures are right about personal liberty in the face of oppression. So to be blindly countercultural ignores the image of God emblazoned on each and every culture. Somewhere in each culture, He’s there. We must learn to recognize those aspects, learn from them and use them as inroads for the Gospel.

Perhaps more embedded in the countercultural stance of the Church is the message that “you non-Christians” and not “us Christians” are full of worldly culture. A false dichotomy is established: “You” need redeeming while “we” are agents of redemption. The implication is that either a) the Church is cultureless or b) the Church has its own holy culture and that, because of a) and b), the Church is susceptible to the disease of contemporary culture and must always fight it.

And that is a major problem.

It is not true that the Church is cultureless. Culture is everywhere, even in God’s established Church. When tutoring some middle school students years ago, they asked me to define the word culture. The best thing I could come up with on the spot was the explanation that culture is those things in your life that seem normal to your family or friends but abnormal to other people. That isn’t the most sophisticated definition of culture, but I think it is helpful. The Church is full of behaviors and values that are abnormal to people outside (and often inside) our community. To say that any group of human beings can be cultureless is to be ignorant of what culture is.

In addition, it is impossible for the Church to be culturally holy. My argument for this is not theological as much as it is practical. The global Church is multicultural, and many of the cultures among our own brothers and sisters are contradictory to one another. Cultures within the American church alone oppose one another. On a global scale, the differences among cultures of the Church are overwhelming. So which one is right? American middle-class Southern Baptist culture? New England upper-class Presbyterian (PCA) culture? Kenyan poverty-escaping Pentecostal culture? Chinese house-church culture? They certainly don’t all agree.

The Story of God

I wholeheartedly agree that the Church is susceptible to the influence of worldly culture. But I disagree just as wholeheartedly that worldly culture is “out there” and is advancing into the Church unless we fight it. Because the Church is culturally imperfect just as the world is. So the problem with our view of the disease of culture is not that it exists, but where it exists. The Church should be made up of people who point to themselves and say: "Me. It’s me. I am the problem with the world."

When Christians, as His representatives on Earth, fail to recognize the sin in our own hearts, even the cultural sin, we mar His image and bring ill repute to His name. Yes, there is sin in the world that we should fight. But we must always look to find the sin in ourselves first. When pastors, authors and teachers encourage us to counter contemporary culture without regard for the broken cultures within the Church, we look like a bunch of finger-pointing hypocrites.

I agree completely that the Church should be outside of culture, and even counter to it at times. But being countercultural should not be the aim of Christians and Christian teaching. We should be advancing God’s redemption first into our own hearts and then into the heart of each and every culture on the globe. But God’s redemption certainly doesn’t look like the exact opposite of whatever culture you are in. To be blindly countercultural regardless of the context is to make an idol of culture by shaping the Gospel around it instead of shaping our cultures around the Gospel.

Instead of simply being countercultural, Christians must counter the fallen and broken aspects of all cultures, even Church cultures. But while you do so, honor and build upon the redemptive glimpses of God you find.

Laura Ziesel is a seminary student at Azusa Pacific University and a freelance writer and editor living in sunny California with herhusband. She blogs on matters of faith, gender, church culture and moreat LauraZiesel.com. She is also a contributing writer for The Redemptive Pursuit, a weekly devotional for women.You can find her on Twitter @lziesel. This article was reprinted from her blog with permission.

Lessons from a First-Time Protester