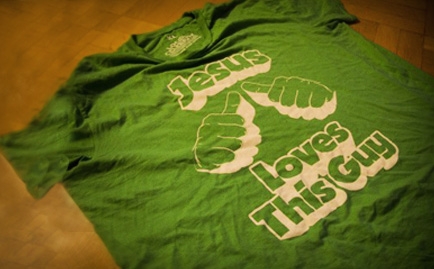 Around the same time Christian nightclubs began to pop up as alternatives to the “club scene.” Extreme sports emerged and so did the movie Extreme Days. Social media changed culture significantly so Christians decided they ought to answer back with their alternatives such as GodTube, Faithbook and Christian Chirp. Add to this tendency of substitution the common jargon of Christian-ese and WWJD wristbands and you end up with a Christian alternative subculture.

In popular culture, alternatives can be either a hip rebellion against the institution or simply what we call generic. Instead of Dr. Pepper, you can drink Dr. Thunder. Problem: the alternatives never measure up to the original. Yet Christians love to propagate alternatives.

In theory, the Christian subculture isn’t a terrible idea. Unfortunately, Christianity often expresses the wrong kind of alternative. This isn’t to say that all of the things listed above are bad in and of themselves, but that we sell ourselves short if that is the only kind of alternative the Church is known for.

In the New Testament, we’re given a picture of the Kingdom people of God who organize themselves around an alternative king, namely Jesus. The greatest alternative isn’t a second-rate imitation of things from the popular culture, but rather a community (many communities in local contexts) who together live in a radically different way – the way of Jesus. In a world where the popular thing was to proclaim, “Caesar is Lord,” the earliest followers of The Way declared, “Jesus is Lord.” This wasn’t just a war of words, but a change in allegiance, one that often meant social marginalization and for some, death. Yet, this movement flourished. Why? Because the Kingdom of God unleashes a beautiful alternative that is so different and creative, that it’s attractive and has the potential to enhance the rest of the world.

The Kingdom of God ought to be known as an enhanced society, not an “almost as good as the popular culture” or “safe from the evils of all things secular” bubble. Scot McKnight says it well: “The kingdom of God, in short compass, is the society in which the will of God is established to transform all of life.” N.T. Wright offers another glimpse into the Kingdom, noting that currently, “heaven is the control room for earth” because “the one who is in heaven is the one who is ruling on earth.” Taken together we can understand the Kingdom of God as: God’s ruling activity embodied within a transformative community for the sake of the world. God’s invitation to us is to become known as a kingdom kind of alternative culture.

Some signs of a Kingdom alternative include:

Love of God
Love of neighbors within and outside of the covenant community
Seeking the welfare of all people
Defying hatred and greed
Feeding the hungry
Clothing the naked
Bearing each others’ burdens
Choosing self-sacrifice over the sword
Redistribution of resources for the purposes of social uplift
Wonderful marriages
Love of enemies
Sexual purity
Healthy conflict / resolution in the midst of quarrels
Learning more about the Scriptures as an open-minded community of disciples
Healings, signs, wonders and the unleashing of all forms of creativity
Justice for the marginalized

Imagine if these were the things that the Church was actually known for. The reputation of the Church wouldn’t merely be as a manufacturer of generic imitations, but rather the kind of alternative that the New Testament envisions.

A Large Number of Single Women Are Leaving the Church. Why?

How do we change our rep? This seems to be happening already as a new generation of Christ-followers begins to take up the mantle of Kingdom creativity. Many young adult followers of the way of Jesus continue to reclaim the radical revolutionary nature of the Gospel. The recovery of the Sermon on the Mount (Matthew 5-7) as central to Christian community in the present and the simultaneous vision of God’s future redemption of all created reality, motivates us to broker a message of hope to the outside culture (Romans 8.18-28, Revelation 21-22, Ephesians 1.10). If Jesus invites us into a counter-cultural discipleship community, and if God’s new creation reality draws us toward the kind of world where all things will be restored, then our alternative has the potential to become the most relevant gift that anyone could ever offer our culture.

Kurt Willems is an Anabaptist writer and pastor who is preparing for church planting next year by finishing work toward a Master of Divinity degree at Fresno Pacific Biblical Seminary.  He writes at: the Pangea Blog and is also on Twitter and Facebook.