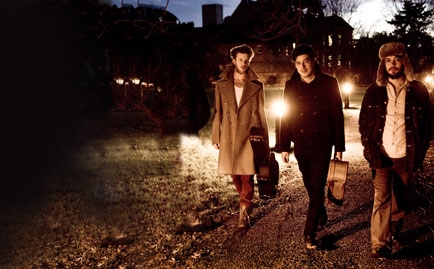 I’ve passed my funnel cake off to a guy who has his own name tattooed on his fingers, and I’m sweating more than anyone has sweated—ever. And I have uncontrollable chills over my entire body because I’m being jostled between hundreds of people, all singing at the top of their lungs: “Awake, My Soul.” But I’m not at the Presbyterian Church I grew up in and loathed, and I’m not at Church Camp. I’m at a Mumford & Sons show at Bonnaroo. And I’m worshiping.

Let’s note that while worship music is never intended to be about us, but rather about God, it still connects to us in a profound way. So many songs seem to address lots of the bright and shiny emotions we feel about God, but sometimes, we can be left feeling detached when trying to worship. It’s that feeling you have in church when you’re almost too hurt to sing about God’s goodness and miracles because your stomach is somewhere closer to the concrete floor. So what about all of the other honest (and sometimes shameful) human emotions we have that we want to express, but can’t? Or what about the songs we hear outside of the church that channel an avenue of praise in us we didn’t know was possible? Can those songs be a means of worship?

It sometimes seems as though the notion of “Christian” music has become so pigeon-holed and cookie cutter, there isn’t much room left for worship music outside of what seeps its way through the church walls. Songs that doubt are conveniently left out of the worship canon, songs that question or confuse, songs that speak about God in a way we don’t always hear: these songs get sidelined. I’m not necessarily suggesting we begin throwing Brand New and Mumford & Sons into our quotidian worship experience; however, it’s interesting to take a look at how these songs can express such authentic feelings of spirituality.

Well, Jesus Christ, I’m not scared to die/ I’m a little bit scared of what comes after/ Do I get the gold chariot?/ Do I float through the ceiling?/ Do I divide and fall apart?/ ‘Cause my bright is too slight to hold back all my dark/ And the ship went down in sight of land/ And at the gates, does Thomas ask to see my hands?

There’s uncertainty here; there’s a distinct desire for truth, for answers. We’re all prone to question—and if we don’t, how will we grow? The more we search and grapple with what God has given us, the more we can discover. This is the most raw form of growth, except we often don’t see it in contemporary church worship. David’s expressions throughout Psalms, and several other places in Scripture, certainly express many of these emotions. Still, it is particularly intriguing to see them through a “secular” lens—a place where perhaps the writers are unknowingly experiencing a form of worship.

So what about the struggle, the haunting bits of shame and frustration that often leave us feeling unworthy to sing along with the lyrics on the projection screen …

When up-and-coming folksters Mumford & Sons sprinkle these thoughts throughout their lyrics, they do it without the listener noticing. “Can you kneel before The King and say, ‘I’m clean’?” they ask, when later they vow: “Lead me to the truth, and I’ll follow you with my whole life.” Suddenly, the listener realizes what he’s singing along with—and it’s not just a song on a mixtape anymore; it’s not just another notch on the set list. It’s a way of relating with God. And the chill that can overtake your soul when hundreds of unbeknownst worshipers shout this in unison is almost unsettling—because it’s usually happening in a place where you never expected to worship. Even when Conor Oberst painfully cries out in “I Don’t Know When, But a Day is Gonna Come”: Is it true what they say about the Son of God?/ Did he come to save; did he come at all?/ And if I dried his feet with my dirty hair, would he make me clean again?

The feeling of not being clean enough and asking for the truth is a notion that is often too close to home for some Christians—both new and old. But it exists, and is often ignored—particularly between the parallel lines of contemporary worship music. And if we ignore that which aches inside of us, where will we be with our God?

With all the doubt, the longing, the uncleanness—all the things we believe Christ can conquer—what do we do when we’re still frustrated? Keep humming along thoughtlessly with the CCM song of the week? Even though we might really be thinking about something we’ve done that’s gnawing apart our insides, or thinking about someone we’ve hurt who desperately needs an apology, some redemption or at least an affirmation of wrongdoing.

But what about when Mumford & Sons say something about f—ing up? A moment of accountability and admittance, coming from the very heart of conviction. Except they confess it using profanity one song and then later making, perhaps, their most profound statement of praise:

I’m not saying we bring profanity into the church, or that we all express our frustrations with faith using swear words. Rather, we can take a look at how a moment such as this can be so deeply rooted in a relationship with Christ. And isn’t that how our relationship with God works sometimes? One second we feel the need to curse, to shout out in frustration and confusion and plea for insight or answers, and the next second we praise, or maybe we glimpse a moment of understanding and truth. And yet, most of the songs we sing—out of the hymn book or the WOW worship mix—don’t address a lot of the feelings we inevitably come across in our relationship with God

So, at the end of it all, this is not to say that what we sing in church, or what we come across in the hymnals, isn’t powerful, praising or identifiable. It’s simply that worship music doesn’t end when the standard four-song medley ends. It’s everywhere—it’s interposed in moments of “secular” songs by “secular” bands. It’s written on the walls of bar bathrooms and shouted amongst audiences by people who may not even realize what they’re quoting—but that’s the thing. It connects with people in a vastly authentic way because it reaches a genuinely sincere feeling in the human soul. We need our God, and sometimes we try to exist without Him. And all these songs, whether written or not, are about just that.

Wounded by the Church

Clean Up Costs Estimated at $32.2 Billion