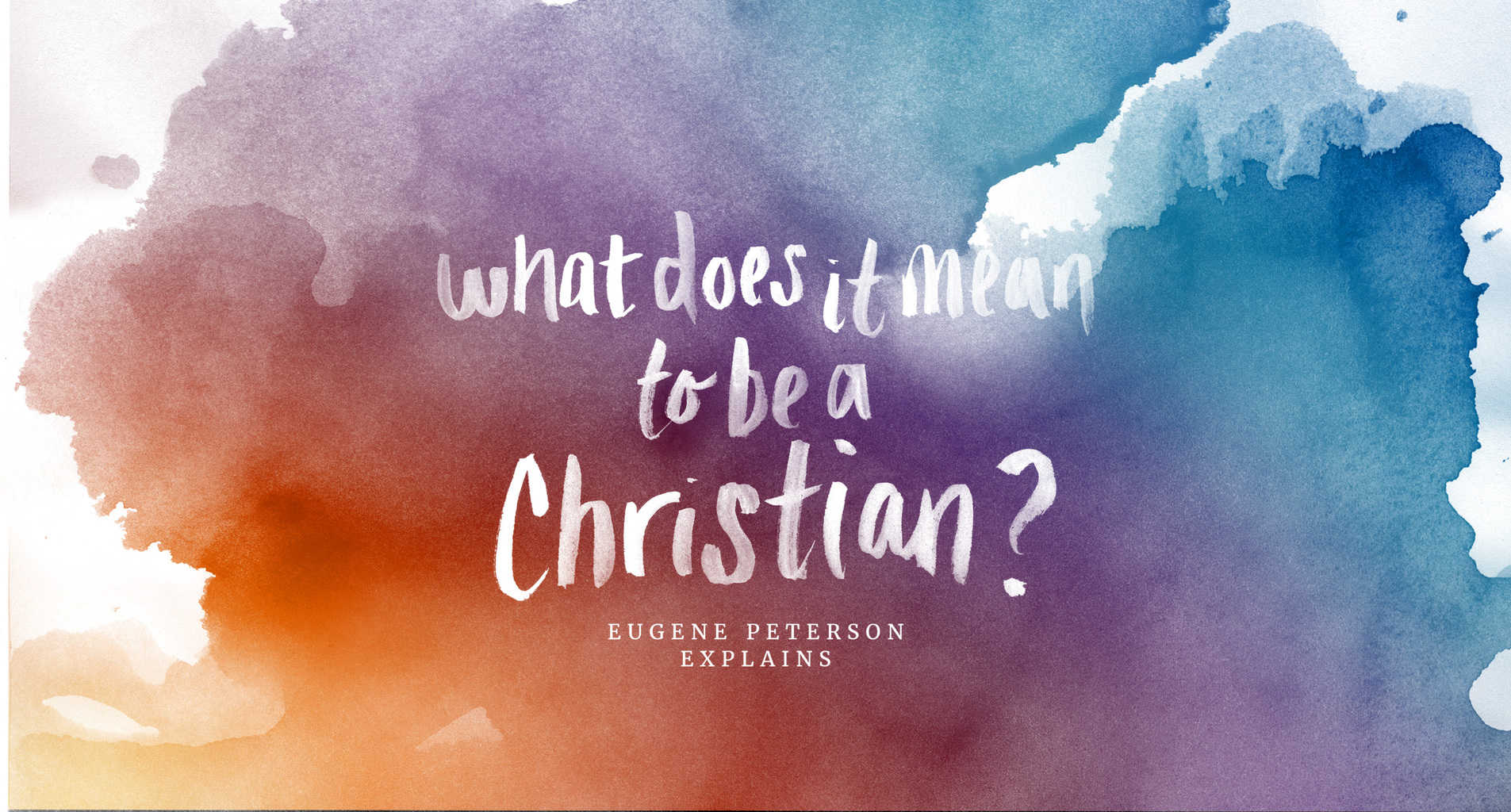 Editor’s Note: The following story first ran in April, 2017. This week, Eugene Peterson died at the age of 85.

There’s a poem Eugene Peterson can’t get out of his head. It’s a brief, difficult poem called “As Kingfishers Catch Fire” by 19th-century poet Gerard Manley Hopkins, just the kind you might expect a thinky, reclusive person like Peterson to like. “Kingfishers” layers on simile, pointing to a “just man” (seemingly “just” as in “moral”), whom it describes as one who “Acts in God’s eye what in God’s eye he is—Christ.”

“As Kingfishers Catch Fire” is about things—or people—acting within their nature—behaving like what they are. Today, you’ll hear this called authenticity. And that’s what lingers with Peterson.

You see, he spent his life in the Church, pastoring, preaching and (famously) writing. But if you talk to him about it, he’ll readily tell you not all of his career accomplished what he now thinks it should have.

If you’re only a little bit familiar with Christian culture, you know Peterson’s work. He’s the author of some 30 books of theology, poetry and commentary, all of which are worth your attention. But one book in particular promises to make up his legacy. In 2002, Peterson published his defining work, The Message.

This groundbreaking idiomatic (read: casual and highly colloquial) translation of the Bible made Peterson a household name among Christians. The Message now exists in countless forms and editions (remember The Message Remix?). Incredibly, though not free from derision, The Message finds an audience with people normally intimidated by the Bible and, on the other side of the spectrum, scholars who recognize Peterson’s deep and impressive knowledge of Hebrew, Greek and English (yes, he did all his own translations from the original languages).

Before The Message, Peterson was a seminary professor  and pastor in upstate New York, where he first began to recognize the disparity in Christians’ lives that would simultaneously haunt and fuel the rest of his career. Later, he planted a church in Bel Air, Maryland, where he’d spend almost 30 years before turning more attention to academics—as a professor of spiritual theology at Regent College—writing and doing translations.

At first glance, Peterson’s career may look eclectic, and that’s certainly true. But that doesn’t mean he’s not focused. If you look for it, you can see a uniting thread to Peterson’s work and ministry, and it all centers around answering—and helping others answer—the question, what does it really means to be a follower of Jesus?

The problem, as he now sees it, was that he wasn’t teaching people how to truly be who they are: Christians. Opposite from the kind of authenticity in Hopkins’ poem, church life stood disconnected from Monday through Saturday life. Sermons didn’t help people live. As a result, people listening to Peterson didn’t understand what it really means to be followers of Jesus. They were Christians, yes, but they didn’t grasp what that means beyond the points of salvation.

In Peterson’s words, he failed.

Peterson has a name for the problem he encountered all those years ago: “incongruence.” The idea is that what he preached and the way he lived were out of alignment, incongruous. He doesn’t mean hypocrisy, though, at least not the way Christians typically conceive of it. He means something more like disconnected. The problem, he says, stems from how people encounter the gospel message.

“I think the way we present Jesus and the whole story of the gospel is adapted in individual ways,” he says.

The kind of individualism Peterson means crops up, most clearly he says, in American Christianity. When the seeker-sensitive church model took off in the mid-20th century, the Church began thinking of salvation almost exclusively as something individuals experience on a deeply personal basis. The problem comes in when the Christian life comes across as a one-size-fits-all package. You could say it’s incongruous.

“I’m not a Christian the same way you are, although we accept the same basis of fundamental truth and relationship,” Peterson says. “That’s why spiritual formation is so important in this whole process because you can’t just copy it; you can’t just copy other things the people or the pastors are doing.”

Once he realized this, he spent the rest of his career as a writer, theologian and pastor—the past 30 years or so—trying to fix the problem, connecting people to what (and who) a Christian really is.

When you talk to Peterson about where the American Church got off track, he gets  prickly.

“The megachurch is the biggest perpetrator of the disbanding of a congruent place,” he says. “If you pack 5,000 people into a church, the pastor doesn’t know a single person’s name and as a result, when people come to church talking about how great the sermon was, the pastor doesn’t know what he’s done. He’s just entertaining people, which is usually what they do.”

The “entertaining” he’s talking about is the same thing he saw in himself back at the beginning of his ministry.

“I wasn’t preaching,” he says. “I was entertaining, I was looking for things that would catch people’s imagination for 20 minutes, and that’s it.”

The “that’s it” part is key, and it captures everything Peterson fears about incongruence.

Peterson doesn’t deny the applications of the gospel for individuals, far from it. But the true mark of the Christian life—what he calls the “essential Christian life”—is a focus on salvation, yes, and then how following Jesus affects others around you.

This is Peterson’s solution to disconnected ways of living the Christian life, and practically, it looks a lot like being a good neighbor.

“I mean treating the people in your home, in the neighborhood, in your congregation as fellow Christians or fellow non-Christians, instead of having a programmatic-style church life,” Peterson says. “I’m after something that has much more integration to it.”

It’s something he’s been after in his personal life.

“Since I was a pastor, I knew the names of everyone in the neighborhood,” he says. “It didn’t mean they all came to church—but they were all influenced by the way I conducted my life.”

This influence flows directly from the Bible, but it doesn’t stop with just listening to a sermon. The person preaching—or believing it—has to live it out.

“Scripture is at the core of this,” Peterson says. “Every sermon has some sort of application and you don’t get the application just by listening to the sermon—but by watching the man who is saying it.”

Christianity, he says, isn’t something you can reduce to a Sunday morning service. And the imaginations of Christians don’t need tickling, they need expanding. That’s a big project, one that stands against the tide of thousands of American churches. But big and ambitious doesn’t mean complicated.

“I’m trying to provide an imagination that develops congruence,” he says. “I don’t think it’s anything complicated: It’s just a matter of developing an imagination that gathers things together rather than just setting them apart in different things.”

He’s talking about a Christian life that fragments  church life from the daily life. And the problem there is the myriad influences that shape—Peterson would say “capture the imagination”—Christians’ lives.

And like everything in Peterson’s imagination, he sees the solution as something simple.

“There’s no trick or nothing that allows you to do it,” he says. But he will say there’s a big indicator, an often-ignored idea Christians miss in the pursuit of authentic Christianity: friendship.

“We are people who have feelings, and friendships are a big thing to me,” he says. “When you’re treating the people in your neighborhood and congregation as friends, you made the first big step in having a congregation that knows how to worship and how to love their neighbors.”

Peterson actually says friendship is fundamental to the Christian life, which you can see by looking, for example, at Abraham. The point for Peterson isn’t that Abraham is something special, it’s that it specifically points to God’s relationship with his people. Because Abraham himself isn’t special at all.

“There’s nothing in Abraham’s life that is spectacular,” Peterson explains. “It’s all faithfulness and doing good work. I mean, all those altars he built, what does he get out of that? But they are acts of devotion, acts of obedience and relationships. You know, you don’t just build an altar for yourself. It’s for your family or your community around you.”

And that’s it, in a nutshell. What it means to be a Christian is living shaped by God’s word, obedient to Him and prioritizing others over yourself. For Peterson, it’s just that simple, which is why he keeps describing the Christian life as “not complicated.”

For him, this is what it means to be a Christian: “To be a person who knows how to worship, how to be faithful. I think just those central things.”

“They realized the depth of the Christian faith and that it wasn’t just about getting saved but they were also finding out how this whole salvation relationship worked.”

You can see why Hopkins’ “As Kingfishers Catch Fire” captures Peterson the way it does. The poem forms an imaginative but simple look at the Christian life. In this way, “Kingfishers” represents a microcosm of Peterson’s  whole career.

And it all comes down to this: The poet and the pastor leave the world with an individual-reducing, yet simple vision for what it means to follow Jesus: It’s a community of people who live exactly like God sees them—as Christ.

The Brilliance’s New Song for Dreamers, Made in Partnership with World Relief, Is Stunning