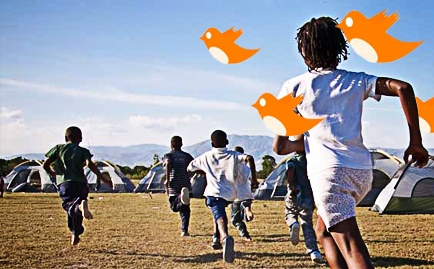 And his current project, TwitChange.com, is the biggest thing he’s ever been a part of.

TwitChange is the first-ever celebrity tweet auction that allows fans of nearly 200 celebrities to bid on three things: to be followed by their favorite celebrity on Twitter, retweeted or mentioned by them in a special tweet. Funds raised through the event will be used to construct The Miriam Center in Haiti, which will house, educate and spiritually support children with cerebral palsy, severe autism and other challenges following the recent earthquake. The project is being organized and funded through aHomeInHaiti.org—another of King’s big ideas.

Celebrities participating in the auction include Eva Longoria Parker, Shaquille O’Neal, Justin Bieber and Switchfoot. Many celebrities are also throwing special extra prizes into the mix. (The Reading Rainbow dude will even come to your house to read you a story!)

Going into the final day of the 10-day auction Saturday, 11,000 bids have been made at TwitChange.com, which has received 26 million hits and national media attention.

RELEVANT recently spoke with the 31-year-old lead pastor of The Courageous Church and asked him what it’s like working with all those celebrities and how he knows when an idea is from God.

Tell us how you came up with the idea for TwitChange and what its purpose is.

Necessity breeds genius. I have a very bad habit of telling hurting people that I will lead a cause for them even if I have no idea how to raise the resources for it. When I traveled to Haiti and visited the very overcrowded and insufficient facilities of the current Miriam Center, I told the staff then and there that we would help make something big happen for them. I had no idea how I’d do it, I just knew it needed to get done.

A year ago, I came up with the idea for TwitChange. I pitched it a few times, but very few people thought the idea was worth the email it was typed in! It came from a brainstorming session (that I had with myself), in which I was wondering what a rather traditional charity auction that really utilized Twitter would look like. I think I was very tired and delirious and the idea for a charity auction and Twitter became one in my mind and BAM—TwitChange.com was born.

With donations through aHomeInHaiti.org included, it looks like TwitChange has raised nearly a third of the $1 million needed to build the new Miriam Center. What are your thoughts on this? Did you expect this response?

We honestly had no idea how much money this auction would raise. As recently as two weeks ago, insiders were telling me to really temper my expectations because it would likely only raise a few hundred dollars per auction at best. I hoped it would be big, but didn’t know it would do this well! We’ve had over 25 million hits on our site in September alone!

Tell us about the center. When will it be completed and what will it include?

Here is a link to the building plans: http://livedesigngroup.net/community/the-miriam-center

In addition to a local church, we are building the largest home and school for severely disabled children in all of Haiti. It will have amazing dorms for each child, beautiful space for all of the therapy they need, offices, dorms for volunteers and staff, a full kitchen, and so much more! Ultimately, it may take about a year to complete the entire project from start to finish.

You recently tweeted that you plowed forward with the idea for TwitChange, despite the many doubters and critics, because you knew it was a “God idea.” How did you know such a “crazy” idea was from God?

Three things give me confidence that something is a God idea. When those three things are in place, it still requires faith to take the plunge, but it makes it so much easier!

1. My wife has a keen spiritual discernment and is very picky about anything she ever says yes to. She will tell me right away if an idea sucks and I hear it a lot. When I told her about TwitChange a year ago, she loved it and really told me she thought I was onto something. That did it for me!

2. Ideas are a dime a dozen in my head, but this idea wouldn’t go away. Across the years, any time an idea continues to stick even when I shelve it, I take it as a sign that it needs some real consideration.

3. TwitChange honors a calling I began to embrace years ago to connect people that normally wouldn’t touch a church with a 10-foot pole together to do good in the world. While our work is not overtly religious, the media makes it clear, whether on CNN or in the Wall Street Journal, that a pastor and church are behind this.

How did you rally so many to support you in the first place?

Eva Longoria. Period. After we pitched the idea to her and she got on board—she first asked several of her closest friends like Kim Kardashian and Ryan Seacrest if they would get on board privately and they all said yes. After this, we developed a slick but simple proposal for her to send to every friend and familiar face she knew. Almost every person she made personal contact with said yes.

We made the idea so simple and so compelling that it was hard to say no.  We weren’t asking for money or gifts … just tweets for severely disabled orphans in Haiti. Who can say no to that?

Our team also built a very sticky website that garnered millions of hits in its first few days, and it really helped to build major momentum.

What are your thoughts on the range of celebrities who’ve participated in TwitChange? Any surprises? What’s it been like working with them?

Nothing has gotten me more amped than the diversity of the celebrities that are on board for TwitChange. We have people from every age, race, genre, genre and sexual orientation out there. This was a personal goal of mine. Frankly, I have found the celebrities to be amazingly generous with their time, energy and attention. I have learned a great deal about many celebrities personally—particularly the extreme pressure they are under. Every day I monitor the tweets for a few major celebrities and it is shocking how many times per day they are harassed, ridiculed and slandered in the foulest ways imaginable.

I have actually had to advise several celebrities to no longer read their @ replies—it was too profane and high-stress for them. From crude sexual advances to constant begging for follows, money, gifts and more—it would overwhelm any average person and it overwhelms them.

They need our prayers.

One criticism of the auction would be that you’re encouraging celebrity worship. How would you respond to that?

We aren’t encouraging celebrity worship at all—it already exists. We are encouraging generosity and asking people to donate to a great cause, and as a bonus they get something special from a celebrity that they already loved. Ultimately, this causes celebrities to be connected to their fans, and everybody to be more aware of some real needs in the world.

Check out Twitchange.com for more information about this project. The auction ends tomorrow.

Kevin
is married to his beautiful wife, Elizabeth, and together they have
three hilarious children: Brendan, Aidan and Lola. He also enjoys
watching God move in today’s culture. He can be found at facebook.com/kevinselders and twitter.com/coemgen17.

The Tastiest Dress Ever (Gross)