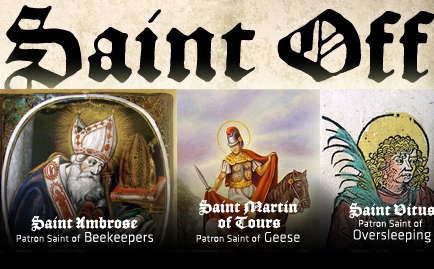 As a baby, St. Ambrose had a swarm of bees land on his face—not to sting him but to leave a single drop of honey behind as a prophecy about the future power of his preaching. Unfortunately, Ambrose’s mom thought it was snot and just wiped it clean with a tissue. Way to ruin a good relic.

Martin was about to be named bishop but didn’t think he’d do a very good job of it, so he tried to hide in a flock of geese, But the geese, sensing he was up to no good, honked and honked until Martin was discovered. So now, apparently, he protects them. (You are not alone in thinking "Geese? Since when does anyone ever require intercession on behalf of geese?" You’re also not alone in wondering what kind of idiot tries to hide in a flock of birds. This patronage? A big honking mystery.)

Isidore, a sixth- and seventh-century bishop who loved learning and placed great value on a broad, open-minded education. He wrote a twenty-volume compendium of "universal knowledge" called Etymologiae—the first known encyclopedia in the medieval world—in addition to works on grammar, astronomy, history and theology. Might as well have called him Wikidore.

Vitus was once accused of sorcery and tortured for it by being thrown into boiling oil. He was joined in the scalding oil bath by a rooster, thanks to a belief that sacrificial roosters combated sorcery. The connection to roosters led to a connection with early rising, and the early-rising thing earned him a patronage of people who oversleep. Sounds like someone’s trying a little too hard to get a cool patronage.

Caedwalla was a Saxon king who kept expanding his influence by killing off other kings and forcibly taking their kingdoms. The historian Bede tells of Caedwalla going through the countryside "by merciless slaughter." But then he went on a pilgrimage and presumably started to feel bad for all the slaughter. Then he got baptized, after which he died. Which technically makes him the patron saint of remorseful serial killers experiencing deathbed conversions.

Bernard  preached the Gospel to the people of the Swiss Alps. He founded a monastery at the highest point of a snow-covered, avalanche-prone pass, which was used by French and German pilgrims passing through on the way to Rome. Bernard and his monks, along with their big, fluffy dogs (yes, that’s where St. Bernards get their name), helped travelers who had succumbed to the deep snow and bone-chilling weather.

Clare was once too sick to attend mass, but ended up seeing it miraculously displayed in high-def on the walls of her room. She could hear it, too. Now you know who to blame for the invention of reality television.

Drogo, who suffered some weird affliction while on a pilgrimage, which led to a physical deformity that was so bad he frightened all the townsfolk. "Don’t look at me! I’m hideous!" we can imagine him saying. So Drogo walled himself into a cell attached to his church and lived in solitude for the next forty years, to protect the community from his repulsiveness. Feel better, unattractive people!

Fiacre was an Irish saint whose herbal remedies gave him a reputation as a skilled healer, especially in relation to discomfort in unmentionable places. He’s also the patron saint of cab drivers. Jokes about the cab driver/hemorrhoids correlation are way too easy, so we’ll refrain.

Bonaventure was a thirteenth-century Franciscan philosopher and cardinal who died suddenly after experiencing intense stomach pains during a church council in France. The cause? Could have been a ruptured bladder. May have been poisoning. Whatever happened, he gets the patronage of gastrointestinal difficulties. Cheers.

Now that you’ve seen OUR list, it’s time for you to make your own! Check out the Great RELEVANT Saint Off, where you can nominate your own "saints" and win prizes (like books and money) in the process!

You’ve seen some of the off-the-wall saints that have existed throughout church history during our 3 week series. It’s time to turn over the reins to you. People can be saints of just about anything. With that in mind, if our celebrities today were "elected" saints, what would they be saints of?

Need Ideas?  How about:

Jason Boyett:  St. Jason, Patron Saint of Slightly Snarky Books that Are Supposed to Fit in Your Pocket but Don’t.

But wait, there is more. THERE ARE PRIZES!

Here is how to win.

1. Make your entry below. Make sure you use a real email address so we can can contact you.

3. The grand prize winner will also receive a $100 AmericanExpress giftcard.

And that’s it. We’re excited to see your entries and look forward to declaring a winner at the end of November.

Now, GO GET YOUR SAINT ON!

From Utah With (Quirky) Genius