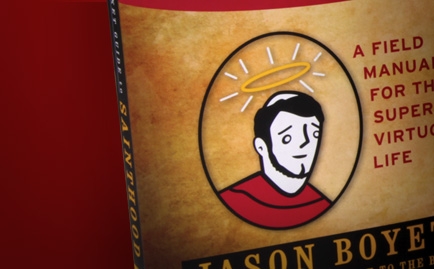 If you’d like some divine relief for your indigestion, or just want to understand why so many figures in stained glass windows are balancing gold plates on their heads, Jason Boyett has the goods: the Pocket Guide to Sainthood explores the weird and wild in the crowded world of the Church’s saints.

The story of sainthood actually begins before the Church. Most ancient Romans were working-class plebeians, while the lucky few were wealthy, powerful patricians. You might imagine this kind of system resulting in a vicious class-struggle with lots of cinematic street brawls. But you’d be wrong, because the Romans were cleverer than that: they had something called the patron-client system, in which a patrician and a group of commoners would forge a mutually advantageous relationship. The client promised to support his patron in any venture, be it political or military or business. In return, the patron promised to use his power and privilege to help the client when necessary, whether with loans, legal protection, or even some hired toughs. Meanwhile, clients would perform all kinds of tasks for their patrons, such as voting for him in elections, or providing crowd-control for public outings (the bigger the entourage, the more impressive the patron).

The early years of the Church coincided with the last years of the Roman Empire, and, thanks to that overlap, Christians spiritualized the patron-client system and adopted it into their developing faith. In Version 2.0 (the Jesus remix), saints became patrons, and devout believers assumed the role of clients. So for the first thousand years of the Church, someone might ask St. George to use his spiritual influence to ask God to heal Aunt Helga’s gout. If Helga got better after George was invoked, then St. George ended up becoming that person’s patron saint. George would then be appealed to for any number of requests. But by the Middle Ages, the system had begun to shift towards Version 2.1. No longer would Anthony and Augustine and Bartholomew all eagerly vie to provide whatever miscellaneous service a believer might require. In the upgraded system, particular saints developed areas of expertise, whether occupations, ailments, or even animals—anything to which the saint seemed to haw a connection was fair game. So if you had a request involving an upcoming hunt—say you really wanted to locate and kill the Golden Stag of Neuschvanstein—you would take it to St. Eustace, patron of hunters (see p. 14). Thankfully, the heavenly realm is stuffed with servants of God just like Eustace, eagerly waiting to aid Alcoholics, Tax Collectors, Funeral Directors, Gamblers, Mountain Climbers, Pregnant Women, Rejects, Swimmers, Teenagers, and Wineries in whatever problem-solving capacity they might need. Don’t fit any of those categories? Relax. There’s a patron saint tor you.

@ ABDOMINAL PAINS: St. Erasmus, who once had hot iron hooks jammed into his intestines while being persecuted by the Emperor Domitian. Think of him when you get tummy cramps, because his were probably worse than yours.

@ ACCOUNTANTS: St. Matthew, the disciple of Jesus. He was a tax collector, so everyone hated him. But he had to have been some kind of financial genius: how would YOU like to try filling out a tax form without calculators, computers, or write-offs?

@ ACTORS: According to legend (which is a nice way of saying this probably never happened, but it’s a great story), St. Genesius converted to the faith while performing in a satirical play about Christians. Genesius was playing a catechumen about to be baptized, when suddenly he realized he wasn’t just playacting anymore. He jubilantly declared his belief mid-performance, and began berating the bloodthirsty emperor Diocletian in the audience below for his despicable treatment of Christians. Diocletian’s response confirmed the criticism: he had poor Genesius killed on the spot.

@ AIRLINE PILOTS: St. Joseph of Cupertino, who was known for miraculous feats of levitation. Almost anything would send him skyward, including singing hymnody, praying at mass, or simply hearing the names of Jesus or Mary. Then he’d get all dazed-looking and float heavenward until a superior commanded him to come down. Unfortunately, he was also known for being a few jets short of a fleet. (See also, Mentally Handicapped People. Not a joke.)

@ BABIES: St. Zeno of Verona, who was stolen at birth by the Devil (!) and secretly replaced with a look-alike demon. This was exceedingly bad news for Zeno’s mama, who ended up breastfeeding the demon for eighteen years. That’s right: eighteen years. Why? Because the pseudo-Zeno didn’t seem to be growing. Eventually the real Zeno, all grown-up, arrived to rescue his mom—who had to be getting pretty uncomfortable with the whole scenario—and he forced the demon child to vomit up all the consumed milk. There is a slight possibility that this story is only a legend.

@ BEGGARS: St. Martin of Tours, who as a soldier was once riding in full regalia when he saw a mostly naked beggar shivering in the cold. He cleaved his own lamb’s-wool cloak in two with his sword and handed the half-cloak to the beggar. Martin then dreamed that the beggar was Jesus, which led to Martin’s subsequent conversion. (See also Geese, Soldiers.)

@ BOATERS: St. Francis of Paola, a hermit who once wanted to cross the Strait of Messina on his way to Sicily but was denied passage by a surly boatman. So Francis did what any clear-thinking saint would do: he spread his cloak out on the water, plopped himself down on it, and motored right across the strait.

@ BOY SCOUTS: St. George, whose bravery, chivalry, and steadfastness famously helped him slay a ferocious dragon and rescue a beautiful maiden. Good thing, because everyone knows the dragon-slaying merit badge is one of the hardest ones to earn.

What To Do When Faith Fades

Taking Time to Listen to the Poor