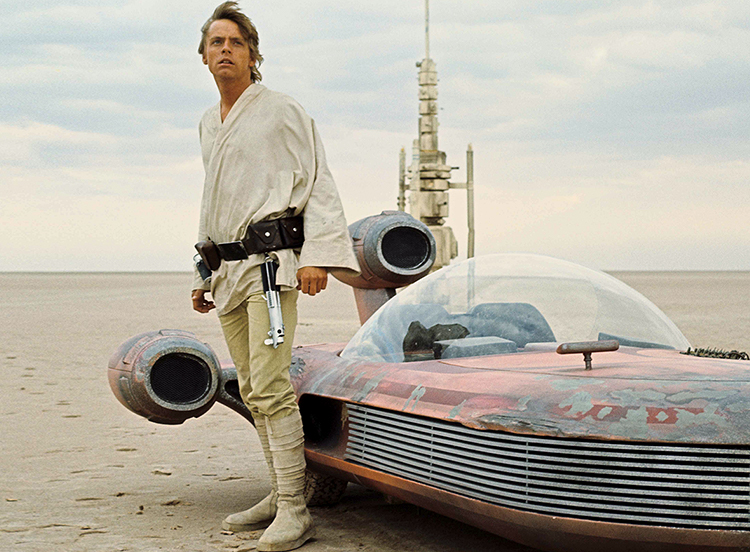 On May 25, 1977, director George Lucas forever altered the cinematic landscape by introducing theatergoers to an exciting galaxy far, far away. He gave us Luke Skywalker, Han Solo, Leia Organa, two lovable droids and arguably the greatest villain of all time in Darth Vader. This film went from a niche genre to being in the mainstream. Indeed, everyone knows about Star Wars now. Between the films, home entertainment sales, toys, merchandise, video games, intellectual property, amusement parks and other sources of revenue, author Jonathan Chew of Fortune magazine estimated the total value of the franchise to be $41.979 billion and that was in 2015.

Money aside, why has Star Wars endured for four decades? It’s simple. Story. Story is the reason why eight feature films have succeeded wildly (with No. 9 arriving this December). In the words of Dan Zehr for StarWars.com, “A good story well-told can have an impact that transcends generations. This is primarily due to the fact that a story carries with it an accurate portrayal of what we, as a society, value. It represents our cultural imperatives, values and biases, as well as our greatest desires and fears. They capture our imagination, take us to far away, exotic locales, and inspire us to believe in something beyond ourselves.” Let’s break Zehr’s statement down further in the context of the Bible as all good stories borrow from God’s.

The Star Wars narrative unpacks the far-reaching struggle between the Rebel Alliance and the Galactic Empire for control of the galaxy through the respective journeys of numerous characters. The Scriptures, in both the Old and New Testaments, also unpack dozens of smaller stories, but they are all pointing towards one—the life, death and resurrection of Jesus.

There’s no person in the history of humanity who has stirred up more conversation and debate on the purpose of life. In fact, while it may be the most widely known and widely memorized verse in the Bible, John 3:16 encapsulates the heart of God for all people. He loved us to the point that He sent His son to die in our place. Luke 19:10 provides further affirmation of the story of Jesus. “For the Son of Man came to seek and to save the lost.”

What values can be observed in the Star Wars universe? Courage quickly comes to mind. Take Luke, the lowly farm boy from Tatooine. After speaking with Obi-Wan Kenobi and initially declining his offer to journey to Alderaan, Luke returns home to find it, along with his aunt and uncle, in ashes. Emboldened to chart a new course, the young pilot follows his new Jedi friend into a series of grand adventures.

Like Luke, the scoundrel Han Solo exercised great courage. A selfish smuggler who once called the Rebel fleet attack on the Death Star “suicide,” had a major change of heart as his Millennium Falcon roared out of the sky to save Luke right in the nick of time from Darth Vader.

I recently came across the David versus Goliath story again, a showdown of epic proportions that highlights the bold courage of a shepherd boy—much like Luke—who stepped up to face a mighty foe who sneered at the one true God and His chosen people (see I Samuel 17). Other values evident in Star Wars include friendship, heroism, sacrifice, loyalty, redemption and, unsurprisingly, hope. Incidentally, these values are all rooted in the Scriptures.

Hope drives the narrative of Jesus, the son of God who took upon our sins that we would become reconciled to God. Consider the words of Proverbs 23:18, a testament to trust in the Lord for now and always. “There is surely a future hope for you, and your hope will not be cut off.” Hope in Jesus is never misplaced hope; it is mighty and lasting and reassuring.

Why does Star Wars keep drawing new fans to the franchise year after year? Brooks Peck, a curator at the Museum of Pop Culture in Seattle, has a thought. “It [Star Wars] explores those big ideas: life, and death, and how should we live, and the thing that is always relevant to society—especially relevant now—is how does an individual make a difference or have an impact in a big, sweeping intergalactic story or conflict.”

The overarching story in Star Wars, the one that all the others contribute to in some way, can be traced back to Genesis 1 in the Scriptures: good versus evil. Too often followers of Jesus—myself included—forget that we have an adversary. And no, he’s not Darth Vader. He is the devil, and he is a tempter and a deceiver. This thief is intent on stealing, killing and destroying (John 10:10). But his time will come to an end as the book of Revelation makes clear. “And the devil, who deceived them, was thrown into the lake of burning sulfur, where the beast and false prophet had been thrown” (Revelation 20:10).

Today’s Devotional: Embrace of the Rejected

Unlike Darth Vader, who finally let go of his hate and saved his son from the Emperor, Satan will not release his seething disdain for those who cling to the saving, supernatural power of Jesus. Accordingly, his days are numbered, and for that we are grateful to God.

A Force for Good

Forty years ago, audiences watched with great interest as a farm boy from Tatooine became a force to be reckoned with. By learning the ways of the Force, he emerged as a new hope for the Rebel Alliance. Christ followers the world over have a hope too. He’s not a fictional character from the mind of George Lucas though. Before George Lucas ever existed, He was. And He is. And He is to come. A long time ago, He shaped all of the galaxies, and He is the same yesterday and today and forever (Hebrews 13:8). He is not one with the Force, but He is the greatest good for all people and the one who brings life, and life to the full.

This man Jesus is not a new hope.

He is the only hope.

is a writer who lives north of Atlanta, GA. For more of his musings, visit www.austinbonds.me or Twitter (@austincbonds)