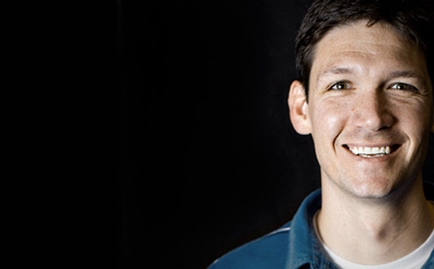 Suffering in mercy—that’s been the theme of Matt Chandler’s life the past seven months. When Chandler, the lead pastor of North Texas megachurch The Village, woke up last Thanksgiving, all was well: 35 years old and healthy, a beautiful wife, three cute kids and a church of nearly 8,000. He was an up-and-coming speaker who often taught at national pastors’ conventions. Chandler was an emerging superstar.

Life was good. “Up to this point, everything we touched turned to gold,” says Chandler, now bald with a scar on his head, sitting on a couch in his church office.
That Thanksgiving morning, his wife, Lauren, was in the kitchen preparing a few dishes for a family dinner at her parents’ house less than a mile away. He was in the living room feeding his then-6-month-old daughter, Norah. “I fed Norah, went to put her in the Johnny Jump-up, and turned around to head back to my chair. And that’s literally the last memory I have,” Chandler says.

Hours later, he woke up in a hospital surrounded by family and friends. The doctors told him he had suffered a seizure, and before he knew it, he was being hauled upstairs for an MRI. “To be honest with you, I could care less about the diagnosis then,” Chandler says. All he could think about was going home and the agonizing pain in his mouth that came from biting through his tongue. So he didn’t think twice when the ER doctor said he had a mass on his right frontal lobe.

It wasn’t until a few days later that Chandler experienced what he calls “the first punch to the gut,” when his neurologist confirmed the mass wasn’t a glioma and called for immediate brain surgery, reading off a near endless list of dangers surrounding a craniotomy.

A few days later, just before surgery, Chandler responded publicly—through a vlog, in which he sighed over missing the first service in his church’s building and nearly wept over the thought of not being able to someday walk his two daughters down the aisle or to see his son grow into the athlete who he never was. It was an emotional five minutes.

Chandler says the toughest part of his circumstances has to do with his family. He believes Lauren’s love for God and independent nature would carry her through the grief should he pass away, yet he fears the effects on his children. “None of my kids have a real understanding of the Lord yet. They’re the ones I worry about,” he says.

Right now his oldest, 7-year-old Audrey, understands what is going on, but 4-year-old Reid has no clue, praying the night before our interview that his daddy’s hair would grow back. But the cancer Chandler has, which wasn’t fully removed in surgery, doesn’t historically end in sudden death; it gradually deteriorates the brain, eventually putting the patient in a vegetative state. He hurts to think about his children seeing him leave in that way.

Chandler, nevertheless, concluded his video with a perplexing statement—almost unfitting—that is still resonating inside people today: “There’s this part of me that’s so grateful that the Lord counted me worthy for this.”

It’s what he told the Associated Press the next month, and it’s what he’s still saying today, taking high rounds of chemo that make him constantly nauseous: “To have the opportunity to battle what’s life-threatening, to have everything that’s dear put on the table next to Christ and to be able to go,  ‘No, He’s better; He’s still my preference,’ and to have been given the public forum from which I get to do this, that for me is why this is a real gift.”

Chandler’s public display of faith in the midst of terrible circumstances has resonated. That initial vlog has led to many more, most of which have more than 20,000 views on YouTube. And Chandler’s thousands of Twitter followers keep up with his ups and downs as he documents each doctor visit and health milestone. It’s remarkable how Chandler has so effectively used social media to communicate with the people who love and pray for him. In ways not possible five years ago, Chandler has an army of support from whom he can request prayer at any given moment.

Like his mentor John Piper, Chandler has always aligned himself with a reformed doctrine—derived from the teachings of Martin Luther and John Calvin— that stresses the centrality of Scripture and God’s control in salvation and everyday life. So, in a way there’s an irony in his situation, as he has become a modern Job and Jeremiah. After all, if he believes God is sovereign in all things and that events in a Christian’s life are God’s will, does that mean God gave him cancer? And if He didn’t, what does that say about His sovereignty and perfect will?

Many people whom he deeply respects, including close friends, however, have disagreed with his response.  “I’ve had plenty of email tennis matches with guys who say: ‘God doesn’t have anything to do with this. This is a fallen world,’” Chandler says. “I don’t think God gave me cancer … but He knew it was coming. He certainly didn’t stop it, and He’s certainly able to. The whole Scripture is: bad things happen in a fallen world, and God is enough in those things and uses those things to the Glory of His own name.”

So Chandler is still preaching the same message he has been for the last 15 years; only this time his life is the illustration, believing the Lord is using him to teach in this. And that’s exactly what he’s done—even from the beginning when he thought he had just three years to live. “For as bad a rap as theology gets, at the end of the day,” Chandler says. ”It was doctrine and theology that became the firm foundation in all that bad news. It comforted us and became warm blankets for our souls, and enabled us to go, ‘God’s God.’”

Finding Purpose in His Pain

Though Chandler’s beliefs haven’t changed, nothing has been easy, either. “I’m in no way wearing a cape in all this,” he says. Some days he’s depressed. And some days he has “wicked” thoughts, when he wonders, “Why me and not someone else?” But Chandler says the most drastic thing that’s changed is the fog being lifted from the precipice on which he stood. Here he was, a successful pastor with a successful life, but suddenly the things that mattered—the things that had sometimes been obscured by that fog—were crystal clear. “It’s not as difficult to fight sin and to fight thoughts and to fight those kind of things off when you’re going, ‘I could be dead in a few months,’” Chandler says.

“It’s not punitive; it’s not random; and it has not been given to us by God to show us who’s boss,” Chandler says. “There’s a purpose in it; there’s a limit in it; and in the end, God is not going to give to us what He will not sustain us in. And I believe at that moment, the Holy Spirit gives you the power to stand. That’s exactly what we found out. And I’m rejoicing in what He’s doing in it.”

This article originally appeared in the Fall 2010 issue of Neue. To read more articles like this every other month, you can subscribe to Neue by clicking here.