Media has been a divisive topic among Americans who are on different sides of the political spectrum. And according to new data from the Public Religion Research Institute, there are different sides within religious spheres, too.

The survey, conducted in March 2021, examined news-watching habits of Americans from a wide variety of racial and religious backgrounds. The results show that there is a drastic difference in the media outlets consumed by Christian individuals. There is no single outlet that all who are religiously affiliated trust; rather, there is a wide range of coverage that Christians turn their ears to. 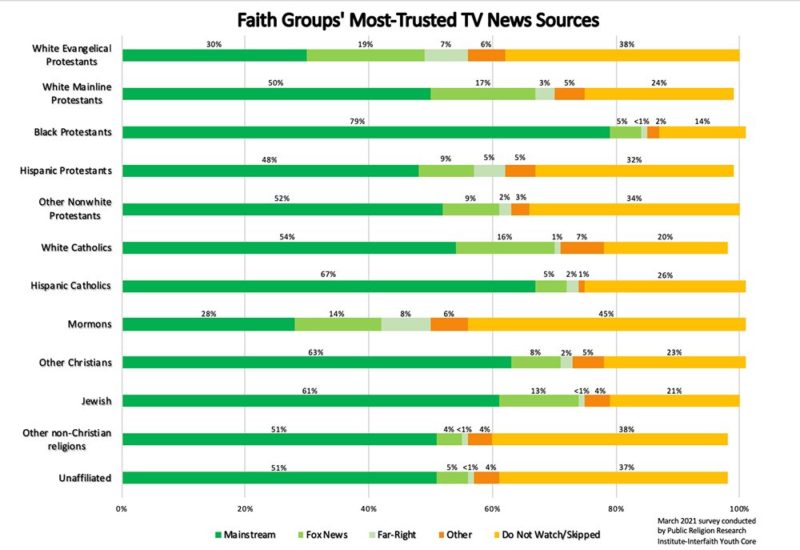 A majority of faith communities stated their trusted news sources comprised mainstream news outlets, such as CNN, ABC, CBS, local news and more. In particular, 79 percent of Black Protestants and 67 percent of Hispanic Catholics said they believed mainstream news outlets provided accurate information about politics and current events. Comparatively, only half of all White mainline Protestants.

Additionally, when it comes to far-right news outlets, such as One American News Network and Newsmax, white evangelicals and members of the Church of Jesus Christ of Latter-day Saints trust these sources more than white Catholics, Black Protestants, Jews or other religiously unaffiliated Americans.

While these numbers show a large division among race, religion and media affiliation, a large portion of religiously affiliated individuals do not actively engage with televised news. Nearly half of the members of the Church of Jesus Christ of Latter-day Saints who were polled stated they did not watch television news, in addition to 37 percent of white evangelicals, religiously unaffiliated Americans and those belonging to other non-Chrisitan traditions.

PRRI utilized this data to determine the role that media coverage plays in the lives of Christian consumers. Their research shows that the ongoing media division is invading not only the political world, but also the spiritual world.