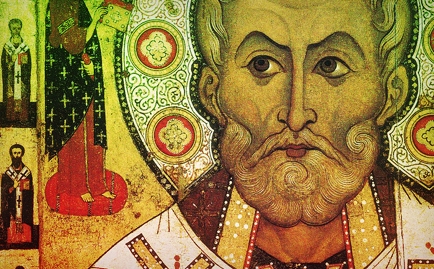 Saint Nicholas is possibly the most popular saint worldwide, though much of his fan base is largely unaware he is a saint. They know even less about the life of this man who would eventually become a symbol for Christmas.

Nicholas was born sometime around AD 280 in Lycia to wealthy, Christian parents. Not unlike many saints, the tales of Nicholas’ life focus on his goodness. He is said to have shown remarkable piety even from birth. There is at least one account of Nicholas, on the day he was born, standing up and praying to God in the middle of his bath, and there are numerous reports of the infant Nicholas refusing to nurse on days of fasting. It is hardly surprising, then, that from a young age, Nicholas was known to enjoy church and memorizing songs and Scriptures.

When he was still a boy, Nicholas’ parents died in a plague, leaving him with great wealth. He continued in their charitable work, striving to use his money for good. His uncle, the Bishop of Patura, became his guardian and ensured his education in the church. Nicholas was an exceptional student and became a priest at a very young age.

Once, while traveling by sea to Jerusalem, a storm threatened the safety of Nicholas and the ship’s crew. Legend has it that Nicholas prayed to God and immediately the storm was calmed. Upon returning from that trip, he visited a church in Myra. A priest was outside the church waiting. When Nicholas arrived, the priest asked his name. As Nicholas answered, the priest began praising God. He explained that God had told him to wait outside the church and the next person to come by, named Nicholas, would be the new Bishop of Myra. While Nicholas at first humbly refused, claiming unworthiness, he eventually became their Bishop. He was called the Boy Bishop, because of his age, and was supposedly loved by all.

The stories of miracles performed by Nicholas are numerous—increasing grain cargo on a ship in order to feed his people, appearing to an emperor in a dream to save three wrongly accused men, again calming a stormy sea, bringing a drowned boy back to life and many others. It is said that he performed at least 20 miracles in his lifetime.

Two stories of Nicholas are more popular than others, perhaps because of their connection to the image we have of Saint Nicholas today. It is said that during a famine, an innkeeper captured three boys, chopped them up and put them in a barrel of salt water, with plans to eat them. Nicholas somehow found out, imprisoned the innkeeper and brought the boys back to life. Because of the story of this miracle, as well as others, Nicholas gained a reputation of protecting children.

The other popular story is that of a man with three daughters. The man was poor and could not afford dowries for his girls. At the time, this meant they would have to succumb to a life of prostitution. Hearing this, Nicholas dropped a bag of gold down the chimney (or, according to some, threw it in the window) on the night before each girl needed a dowry for marriage. One story says the last bag of gold Nick threw in landed in a sock, hanging to dry above the fireplace. Sound familiar? Another version of the story tells of Nicholas’ request to remain anonymous until after his death.

From these stories, it is easy to see how Nicholas, Bishop of Myra, eventually morphed into the Saint Nick we’re familiar with today. He is the patron saint of children, so the custom arose of giving gifts to children in the name of Saint Nicholas on his feast day, December 6. The Dutch eventually brought this tradition to America. Their name for Saint Nicholas—Sinte Klaas—eventually evolved into Santa Claus.

Saint Nicholas (as well as our modern Santa Claus-version) was known for his generosity, his love of children and his care for the poor. Because of these qualities, and his December death-day, he has become associated with Christmas. It makes sense, given that Christmas is the time when we celebrate the birth of Jesus, the One who perfected generosity and love for children and the poor.

This Christmas, instead of complaining about Santa Claus taking over, we can strive to remember the life of a man who is known for living out Christ’s love. May we, too, be aware of the needs of those around us and be willing and generous enough to help.

What Christmas Says About America